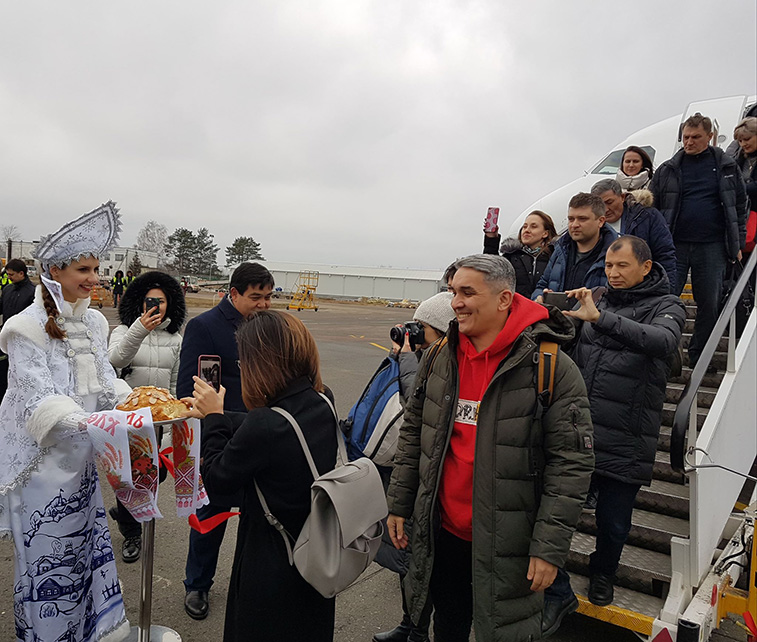 FlyArystan’s first flight took off on the 1st May, 2019.  7 1/2 months later, on the 13th December, it began its first international service: from Nur-Sultan to Moscow Zhukovsky.  A full flight, this route will mainly be about Kazakh VFR.

FlyArystan – Central Asia’s first LCC – has enormous energy and ambition.  Based in Kazakstan, its name means FlyLion.  Its initial routes were from Almaty to Nur-Sutan (formerly Astana), Karaganda, Taraz, and Uralsk.  And today, 13th December, it launched its first international service: daily from Nur-Sultan to Moscow Zhukovsky. 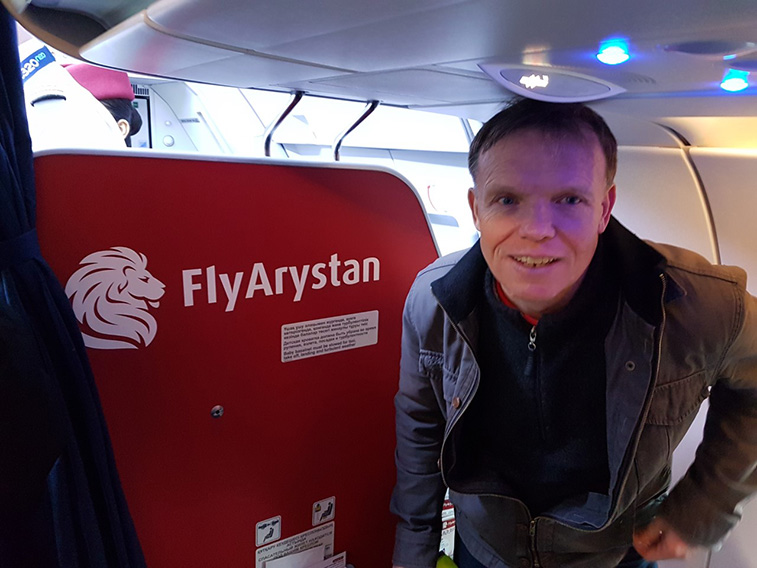 Tim Jordan, Managing Director of FlyArystan, enthusiastically discussed the airline, country, and challenges with James Pearson, anna.aero’s Chief Analyst. This included aboard the airline’s fourth A320, which the airline took possession of just two days before. “Sleek and simple” was how Pearson described the interior, logo, and livery.

FlyArystan’s LF is currently about 94%, which is partly the result of very low fares as it’s so new.  It currently has four aircraft in operation.  The fourth operated the carrier’s first international route today, and it joined the fleet two days ago.  It has two bases: Almaty and Nur-Sultan.  Two more – including Karaganda – are coming.  “But one or two aircraft bases aren’t good economically, so we’re growing each base,” said Jordan.  This is key.

FlyArystan has 40% lower costs than parent

Kazakhstan has many complexities, including some large cities whose airports shut at 1700. But this is counterbalanced by good infrastructure.  “There are harder places for an airline.  It’s a different type of challenge here.  The challenge isn’t the number of runways.”

Until now, FlyArystan has only operated domestic routes. Going forward, Russia will inevitably be a large market.  OAG Traffic Analyser shows that, in the past year, 1.7 million flew between the two countries, with much potential for brand-new routes and demand stimulation.  FlyArystan’s first flight was full, and mostly of Kazakhs.  Kazakh VFR will be the primary driver of demand, Jordan said.

“Zhukovsky is a simple, inexpensive, low-cost airport.  It’s also closer to Kazakhstan than Moscow’s other airports [especially Sheremetyevo], so we save fuel too.”  The fact that Zhukovsky has four-minute runway-to-stand taxi times and no holding clearly helps operationally and economically.  Undoubtedly, FlyArystan will have multiple routes from Kazakhstan to Zhukovsky in the coming years, benefiting from marketing economies and negotiating hand from passenger volume. 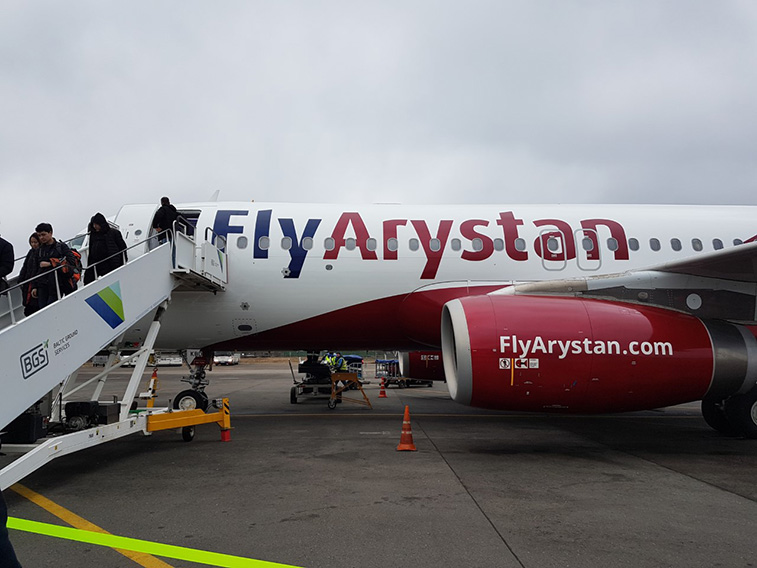 In the past year, 1.7 million flew between Kazahstan and Russia, with much potential for brand-new routes and demand stimulation. Undoubtedly, Moscow Zhukovsky will see several more FlyArystan routes.

Many low-cost subsidiaries from FSCs aren’t run as independent units.  “We’ll get our AOC in the 2Q of 2020.  Now, we’re a marketing operation.” Jordan said.  “But for a new entrant, we value the experience of Air Astana and we draw on it.”  The pair are likely to cooperate in the future through codeshares.  “There are lots of win-win opportunities for us.”  It’ll be interesting to see what happens and to what degree it happens. “Nothing will impact our fundamentals,” Jordan stressed.

All about demand stimulation

57% of FlyArystan’s fares are in lower fare buckets, clearly helping to stimulate demand including among first-time flyers.  Base fares often start from USD$10 one-way. Ancillaries currently account for 10-15% of the airline’s total revenue, but this is just the beginning.  “Lots of laws have had to change,” Jordan said, “including the ability to sell bags and alcohol.”  It is now the only airline in Kazakhstan that’s allowed to sell bags.

FlyArystan has 40% lower costs than parent

But it is low costs – and the productivity that enables it – that’s key. It now has a 40% cost advantage versus Air Astana. Aircraft productivity is aided by domestic sectors being one-to-two hours.  “For us, we want eight sectors a day.  That’s the most important thing.  That enables a potential of 1,200 passengers per aircraft each day.”  Not just enabling lower fixed costs per mile and seat but, as important, revenue-generating opportunities, including ancillaries.  It’ll be interesting to see how the growth of international service impacts sectors per day, revenue per sector, and total revenue. 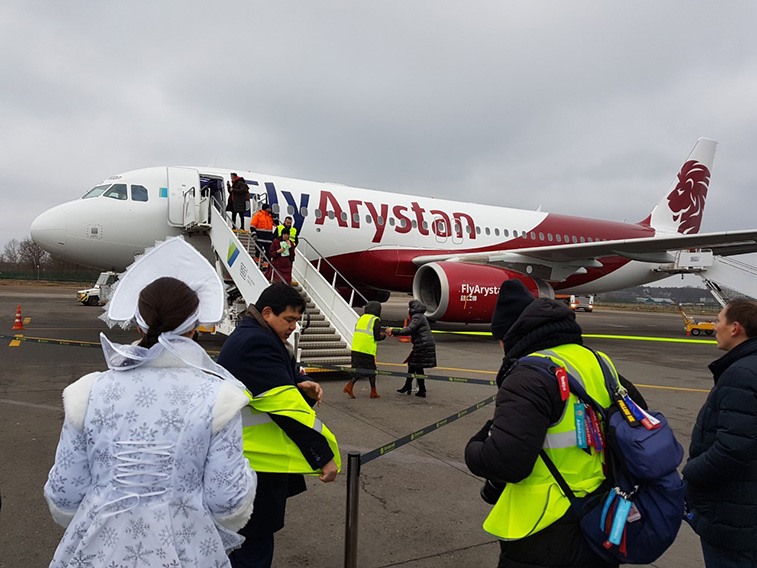 The return flight, to Nur-Sultan, was also full of fare-paying passengers.  It landed back in the Kazakh airport around ten minutes ahead of schedule, ready for its next service.

“Our focus in on growth,” Jordan said. “We expect 10 aircraft by YE2020 and 15 aircraft by 2022.”  The latter is conservative, perhaps intentionally so.  I suspect it won’t be many years until FlyArystan is larger than its parent.  “We could be bigger in terms of seat passenger volume,” confirmed Jordan, “but not ASKs.”  For the simple reason of sector lengths.

“I really enjoy being on the ramp,” Jordan enthused. “It’s fun.  I help with the bags, directing people, boarding…” And he really means it.  Not just for organisational culture and team spirit.  Fundamentally, at a personal level too.  His contentment with it was obvious. And rightly so.