There are, of course, numerous sources of data for airports.  It’s about being selective about what matters most and tailor-making it to the business case at hand. It’s about realising how it helps airlines.

As Carl Schultz, Director Airline Business Development, Metropolitan Washington Airports Authority, pointed out in a great presentation about local demographics based on the Simpsons, “airlines have the same data you may have, but they aren’t subject matter experts on your market.”  Thus, “a strong local resource can help you a lot.”

PDEW is almost zero, so what do you use?

Which nicely raises the issue of alternative sources of data. There are many.  Kirk Lovell, Director of Air Service & Business Development, Myrtle Beach International Airport, chaired a session on this subject.

“For us, PDEW is often almost non-existent.  If we have a PDEW of three, we’re excited.”  This data doesn’t mean there’s no market.  Quite the opposite.  Myrtle Beach received over 20 million visitors in 2018 across all modes, with air travel possessing a 6% share – which Kirk is adamant can increase to 14-16%, although infrastructure will need to be developed.  Of these 20 million, half come from North Carolina and South Carolina.  Stripping these out, it’s a market of 10 million.  To work out where’s feasible, Kirk and his team look at tourism, second property ownership, and local population and inbound migration. 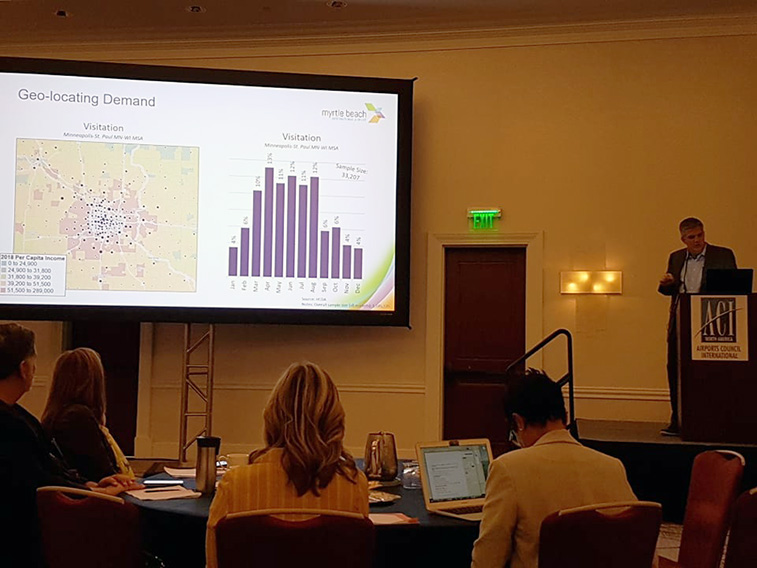 Kirk Lovell gave the example of visitation in Myrtle Beach by those living in Minneapolis.  March-August is by far the key period and it’s what he called the “spend period”.  Geo-locating demand enables Lovell to demonstrate demand from within each area of Minneapolis, their relative wealth, and the propensity to fly to Myrtle Beach. So helping to demonstrate the business case to his airport.  “By going through our methodology with airlines, we build trust with them.” Both Spirit and Sun Country now operate Minneapolis – Myrtle Beach on a seasonal basis. But it’s not just tourism. Lovell said that second homeownership is very important too, especially from New York, Virginia, New Jersey, Pennsylvania, and Maryland in that order. This is calculated by using tax records from state and local providers. Lovell said that second homeowners tend to travel in shoulder periods, which is exactly what he is keen to develop. Likewise inbound migration, with almost half-a-million such people in the area in 2018, especially from the northeast and mid-Atlantic. They too will help with shoulder season growth.

Laura Allen, Senior Business Development Manager, Expedia Group Media Solutions, spoke about the role of OTAs in route development and that increasingly prevalent development: search data. A number of companies now offer it. “Historic booking data is very important, but search data is crucial: it’s about where and when passengers really want to go.”  It represents what she called “true traveller intent”.  Allen said the Expedia Group companies collectively have 165 million flight searches every day – think of that data and potential insights – across 145 million unique visitors a month. 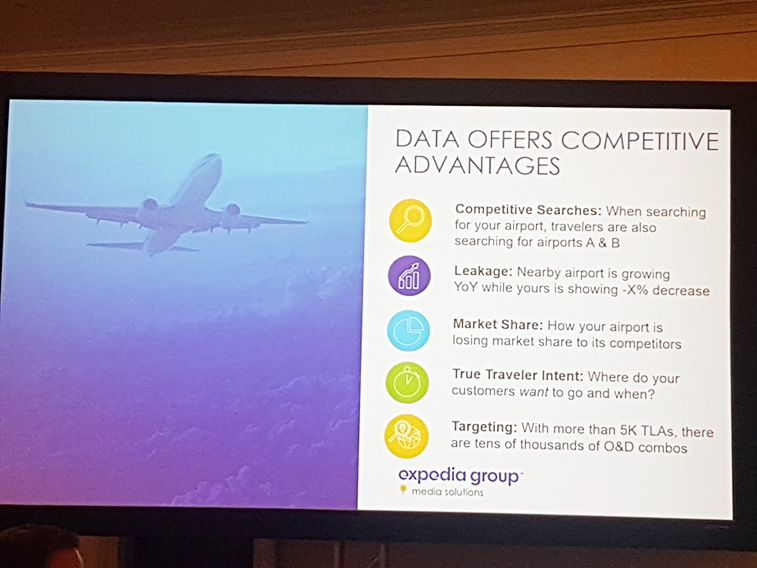 Cell phone data: where, exactly, do people go and how long do they stay?

Tamara Pigott is Executive Director, Lee County Visitor & Convention Bureau/Lee County Economic Development, of which Fort Myers is the county town.  Pigott spoke about cell (mobile) phone data, among other topics.  “Cell phone data tell us a lot about our passengers.  We use data from Arrivalist.  For example, using cell phone data, 38,500 travellers were observed against perhaps 300 for a traditional survey. 64% of these had Lee County as their primary destination and they stayed for an average 4 days and 7 hours.”  This, she said, is simply the tip of the iceberg.  For example, she can see exactly where they visited in the county.  From this data, and more, Pigott has devised three profiles that represent its visitors in her quest to greatly understand her visitors and what drives them. 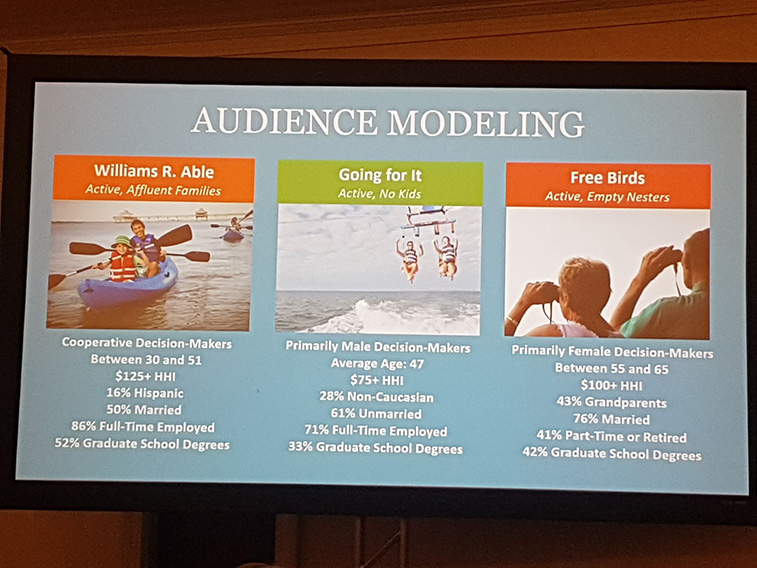 The three visitor profiles to Lee County that resulted from Pigott’s data.

Whatever you use, know what underpins the numbers

Why?  Because it helps with all-important credibility, which goes hand-in-hand with relationships.  As Lovell said, “with all numbers, airports must fully know what’s behind them.  Or if something goes wrong, credibility will be lost.” And if numbers don’t look great or as good as you hope, it’s an opportunity to have well-crafted arguments created in advance, itself helping credibility.