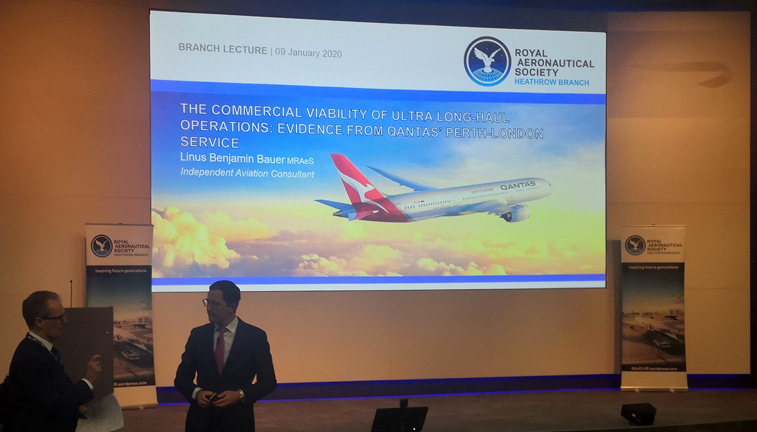 Jonathon Counsell, Head of Sustainability at IAG and President of Royal Aeronautical Society’s Heathrow branch, welcomes speaker Linus Benjamin Bauer. Over 200 aviation professionals, RAeS members, and students attended the event, in which Bauer explained his findings from the first study into the viability of Ultra Long Haul routes.

Ultra-long-haul flights over the past decade have been typically famous for two things: unparalleled public attention and extreme vulnerability to internal and external factors. At an event at BA’s head office on 09 January, Linus Benjamin Bauer, consultant and ex-market development manager at Etihad Airways, Singapore Airlines, and Skywork, presented the numbers from Qantas’ direct Perth – London flight. 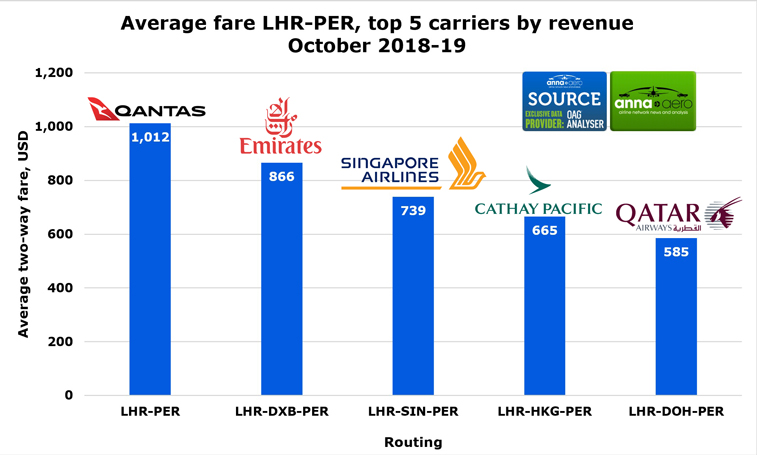 The nature of Perth – London is that it passes all the major hubs which have grown out of connecting east with west. These include Singapore, Dubai, Doha, and Abu Dhabi. Price-led economy passengers are likely to opt for such one-stop service, Bauer explained, with fares typically 48% lower than the direct Perth – London flight between March and September 2018. For higher-yielding business travellers, time is money, and this is reflected in the 78% premium for business class to travel direct. 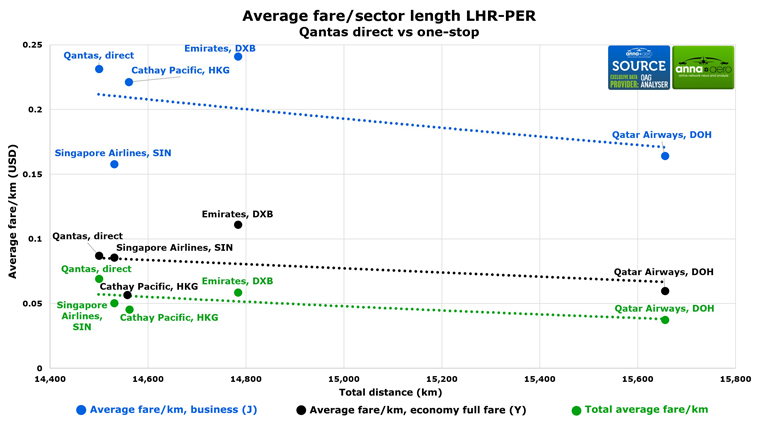 The average fare performance of the top-5 carriers in different cabins can be seen here in our exclusive analysis. Qatar Airways has the longest possible routing, and fare/km suffers in all three metrics, falling below the fare/distance curve. Qantas and Emirates are the two best performers, with average fares consistently on or above the curve. Source: OAG Traffic Analyser. Note: excluding taxes, fuel surcharges, and ancillaries.

On ultra-long-haul flights, a key issue is having to carry the equivalent fuel for two flights. Therefore, for the first half of such a flight, fuel burn is extremely high as the aircraft burns additional fuel just to carry the uplifted fuel load. To counter this, Bauer explained the need for a large three or four class cabin to boost fare performance. Singapore Airlines, with a two-class cabin, have struggled on Singapore – Newark as premium customers choosing business class/no price-leading economy cabin causes poor premium economy loads. 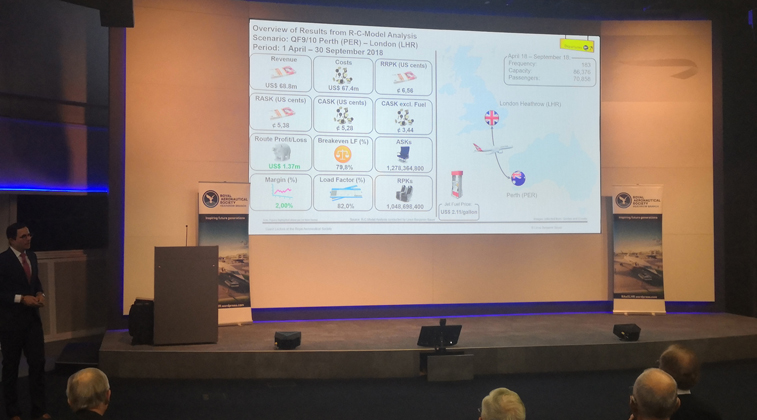 Bauer presents the route profitability of London – Perth. With a net result of $1.37 million and margin of 2%, the route was profitable (albeit narrowly) in S18. Source: Linus Benjamin Bauer.

Ultimately, Qantas is not immune to external factors, and ultra long haul routes are extremely vulnerable to this. Fuel is 64% of all costs on LHR-PER, leading to a 2% net margin between April-September 2018, with a load factor of 82%. Breakeven load factor (BELF) is 79.8%, around 16% higher than an equivalent one stop.

Therefore, even a small fuel price increase would throw this into a loss. Indeed, the current situation in Iran is requiring a 50-minute longer routing and a 90-seat payload restriction – over a third of total capacity. If the crisis continues, it seems unlikely the route will survive long-term. Perhaps the intended A350-1000 for Project Sunrise could be the answer, with greater range and passenger capacity with minimal increased fuel burn?