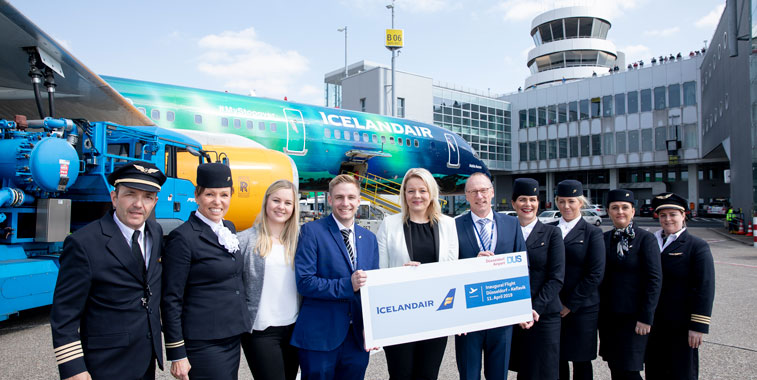 Icelandair now serves five destinations in Germany, including Düsseldorf. Germany – US is its second-largest country-pair.

Of the ~3.9 million passengers carried by Icelandair last year, around 2.1 million – 53% – connected with it over its Keflavik International hub.  It’s not hard to see why.

Based on the week starting 13th January 2020, a two-hour connecting window, and a maximum circuity of 130, Icelandair offers an average of 90 possible connections a day. Showing how geographically well-placed Keflavik is for the carrier’s traffic flows, its average circuity is just 104, i.e. 4% longer than the non-stop distance would be, and its average connecting time is only 90 minutes.

In 2019, Icelandair’s top-five country-pairs were as follows. These five alone had around 47% of the carrier’s total connecting volume.

Icelandair’s top-20 airport-pairs include a good range of origins and destinations. With 20,000 passengers, Paris CDG – Washington IAD is its number-one market.  The carrier is also the leading indirect operator on it. Not surprisingly given geography, Icelandair is strong from the USA to both Copenhagen and Stockholm, both of which will no doubt be boosted further following the end of Norwegian’s transatlantic operations from Denmark and Sweden. Amsterdam features relatively highly in the top-20, with Schiphol the leading destination for the airline’s 262-seat B767-300ERs. 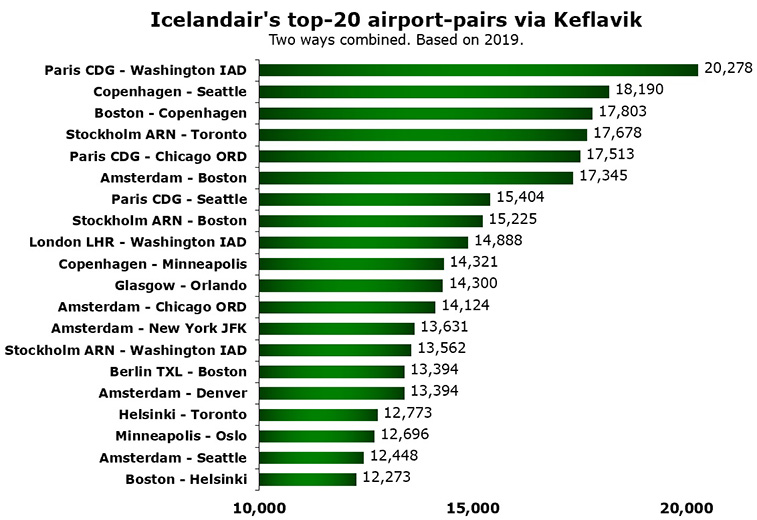 The almost complete absence of London and New York from the airport-pairs table is notable.  This is because Icelandair serves both Heathrow and Gatwick and JFK and Newark, with both cities featuring much more prominently on a city-pair basis. The top-five city-pairs are:

Icelandair should benefit significantly from the end of Wow Air in April 2019. Not just in terms of pruning its network to focus on strong-performing markets, but also in terms of achieving higher unit revenue and stronger load factors.  For in 2019, total seats to/from Keflavik International fell by one-quarter YOY, while those to/from North America fell by 40%.  In 3Q 2019, the latest quarter available, Icelandair reported that yield increases were the greatest driver of revenue improvement. But will Play materialise?