A first-class year for Budapest Airport 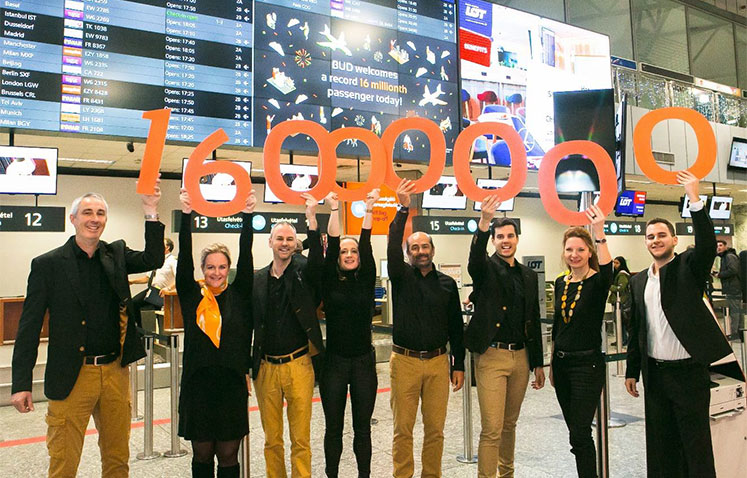 Budapest Airport once again achieved a record year of solid growth throughout 2019, handling over 16 million passengers for the first time in the gateway’s history.

Breaking all monthly records in passenger numbers throughout 2019, Budapest Airport has once again achieved a record year of solid growth. With just one month not surpassing the one million passenger mark, the Hungarian gateway handled 16.2 million passengers. At an 8.8% increase when compared to 2018 passenger traffic, Budapest Airport continues to be one of the fastest growing airports in Europe witnessing more than double the EU average growth of 4%.

As air traffic movements increased by only 6.8%, Budapest Airport upheld the importance of working with the most efficient airlines – now totalling 54 carriers – which operate sustainable equipment for the future. As homebased airline Wizz Air recorded a robust 9% growth (handling more than five million passengers at Budapest in 2019), other carriers witnessed significant growth within the Hungarian market, to name only a few: LOT Polish Airlines (52%), Qatar Airways (24.1%), Ryanair (18%), and easyJet (8%). With the support of all its closely-held partners Budapest is now connected to 156 destinations, across 53 countries.

As demand between Budapest and China saw strong 18% year-on-year growth, the airport projects a more than 50% increase in seat capacity this year when compared to 2018 (based on IATA scheduling). Offering 350,000 direct seats to five Chinese destinations alone – Beijing, Chengdu, Chongqing, Shanghai and Xian – the airport offers the highest number of direct seat capacity to China in the Central and Eastern European region.

The last 12 months have not only seen Budapest break passenger traffic records but significantly achieve improved ASQ ratings, being recognised with its sixth consecutive Skytrax award, and triumphing in both the European and World Routes marketing awards, as the airport keeps passenger satisfaction and airline partnership as its core focus. In this respect the airport plans significant investments in its infrastructure are being made to deliver larger capacities in the upcoming five-year period.

Looking ahead to another year of growth Budapest has already reeled off numerous new arrivals on its route map, as well as its carrier roll-call:

“It takes dedication and vision, not just a beautiful city, to develop connectivity with the world. 2019 was another exceptional year for everyone at Budapest Airport, not only due to our traffic growth, but also the recognition and acknowledgement for all the hard work and effort put in by everyone to get us to this point,” says Kam Jandu, CCO, Budapest Airport. “We look set to continue on the same journey in the new decade. One which will see Budapest embrace the future of sustainability, environmental initiatives, infrastructure renovations, passenger satisfaction and, of course, continued growth.”