With a 47% share of domestic seats, IndiGo has transformed the domestic market. It is also doing the same internationally, with Air India, the country’s number-one international airline, now with fewer than one million more seats than IndiGo.  Here, crew and staff celebrate its double-daily service between Chennai and Kuala Lumpur.

Everyone knows that India is an enormously fast-growing market.  Come 2019, the country’s total seats exceeded a quarter-of-a-billion for the first time. This was despite the end of Jet Airways in April 2019, one result of which was that international seats declined YOY for the first time.

68% of India’s seats are domestic

Growth continued domestically but with “only” 5.5 million additional seats in 2019, it was substantially shallower than usual.  Indeed, India’s growth is largely about the domestic market: in 2019, such seats climbed to almost seven in ten of its total.  Since 2010, domestic seats have grown almost three times as great as international: domestic India up by 92 million (+128%) against 31 million (+62%) for international. 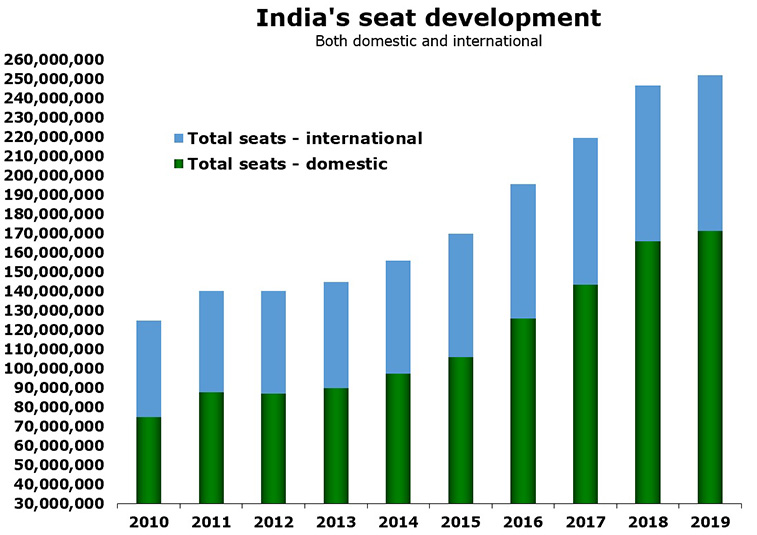 Continually troubled Air India is the country’s number-one airline internationally, but only because of Jet Airways’ exit. And although Air India’s international capacity is only about 30% of its system total, it is increasingly important.  In 2019, it began many new routes, including Mumbai – Nairobi, Delhi – Doha, Amritsar – London Stansted, Delhi – Toronto, and Delhi – Seoul.  International service might have provided a respite, of sorts, from the domestic bloodbath. So, Air India will be worried to see IndiGo – the airline that has transformed domestic India – fast approaching the international frontrunner spot, with only one million fewer seats than the flag carrier. Or perhaps not: IndiGo has expressed interest in acquiring Air India despite its $11 billion debt, no profitability over a decade, and renowned bloated state.

Domestic India is all about the top-five airlines

Around 450 domestic routes involving just 99 Indian airports operated in 2019. On an individual airline basis, domestic India is really all about the top-five airlines. In 2019, the top-five accounted for nine in ten domestic seats, with IndiGo offering more than 80 million alone. With 47% of the market, IndiGo was three times as dominant as second-placed SpiceJet.  Jet Airways’ end also means that LCCs, or those purporting to be LCCs, account for 135 million domestic seats – 80% of the total – up from 66 million (61%) in 2015. 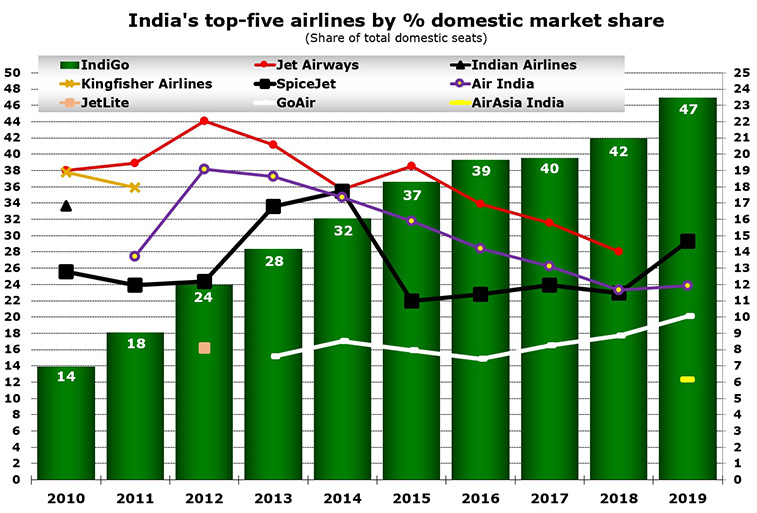 Source: OAG Schedules Analyser. Note: the second axis was added for greater visibility of airlines other than IndiGo. The top-five airlines in each year are indicated.

Can IndiGo, and others, avoid making the same mistakes as Air India and Jet Airways?