Ethiopian Airlines serves 129 destinations across 75 countries from Addis Ababa in winter 2019. China is its leading country by total seats, as a result of the estimated 2.5 million passengers between China and Africa. Ethiopian serves Beijing, Chengdu, Guangzhou, and Shanghai Pudong on a passenger basis.  Rather differently than at present, the airline is now interested in connecting Europe with Asia via Addis Ababa.

One-stops and routings such as Addis Ababa – Harare – Lusaka – Addis Ababa are of key importance, with 61 of the carrier’s total destinations involving them – at least partly.  In all, Ethiopian Airlines’ network is broken down as follows, with 107 international destinations served as it moves towards its target of 120 by 2025.

US now leads by number of airports per country

Europe has grown the most on a percentage basis, but from a low base.  Since winter 2015, Ethiopian has added seven destinations there, including Geneva, Manchester, and Moscow.  Last year came Athens, Istanbul, and Marseille.  Other new routes in 2019 included Bangalore, Port Harcourt (Nigeria), and Garowe (Somaliland).  Chennai starts this April and will operate three-weekly by the B787-8.  It’ll be Ethiopian’s fourth passenger destination in India; the battle between the two Asian powerhouses for the airline’s top country hots up.  The US leads by airports per country, with five: Chicago ORD, Houston, Newark, New York JFK, Washington IAD.

Obviously, it is Ethiopian’s strong African network that it revolves around and that it sells to the world.  Its waves as its Addis Ababa hub, which will be explored another time, are very strongly coordinated to maximise connectivity.

Its 39 African countries are primarily in the East, Central, South, and West of the continent. The countries it doesn’t serve are mainly in North Africa (e.g., Algeria, Tunisia, and Morocco), where it has an exceptionally small presence – it serves as many cities in South America as North Africa – and smaller countries in West Africa (e.g., Sierra Leone, Liberia, and Mauritania). Distance, market size, geographic location, and lack of beyond/behind demand are key reasons for this. Internationally, Nigeria has its most African destinations: Abuja, Kano, Lagos, and Port Harcourt. (Kaduna was served three-weekly in 2018 but ended after nine months.)

In Africa, Nairobi leads by seats and Entebbe by frequencies

Excluding domestic services, Ethiopian’s top-10 destinations by weekly total seats are below. Dubai leads as a result of its thrice-daily service, two of which are by widebodies. Of the six African airports, all are major cities or located close to Ethiopia or both.  Not surprisingly, most – Nairobi, Entebbe, Mombasa, and Khartoum – are in countries bordering Ethiopia.  When weekly frequencies are considered, Entebbe leads, followed by Nairobi, Asmara (Eritrea), Dubai, and Juba (South Sudan). Djibouti and Hargeisa (Somaliland) are also near the top, again emphasising the significance of bordering countries. 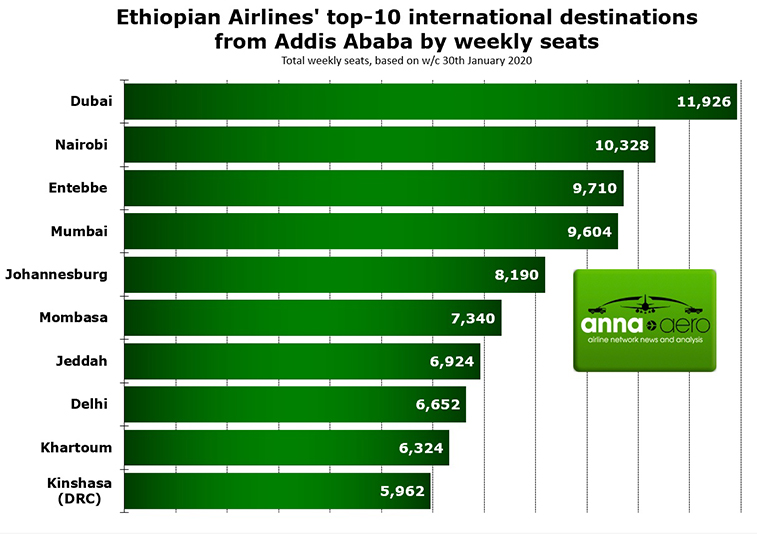