FlyBAIR, a new Swiss airline that dares to be different 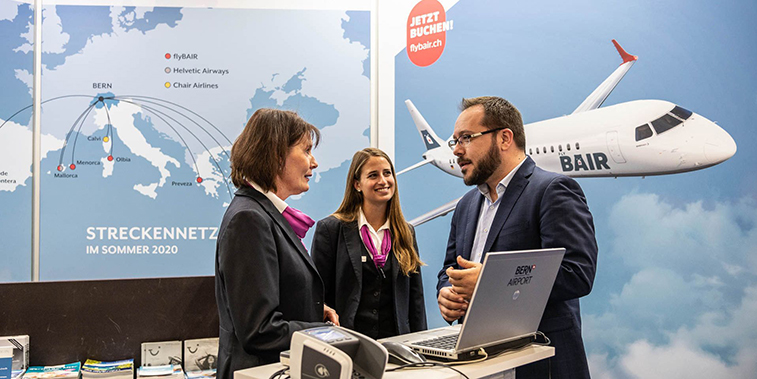 Bern-based FlyBair will serve eight holiday destinations from May. It’ll operate nine routes in that month, including Sion – Palma on a twice-weekly basis.

Switzerland has a new airline: FlyBAIR.  Its flights are now on sale. The carrier, to be based in Bern, the Swiss capital, is crowdfunded.  It began its investment drive last November for its anticipated capital needs of just CHF2.5 million, or ~EUR2.4 million (!).  It now has over 1,400 small-scale investors.  “Our idea is crazy,” the carrier’s website said. “We are calling on the population of Bern [660,000 people in its metro area] to support our dream because we believe that it is high time that an airline connects Bern to Europe again.”

Bern has suffered significantly over the years.  From peak capacity of 434,000 seats in 2014, it had almost zero in 2019 as a result of SkyWork ceasing to operate in mid-2018.  For many years, Bern had between 20 and 38 destinations, including the likes of Amsterdam, Berlin, London, and Munich, to summer-seasonal holiday destinations across Croatia, Greece, Italy, and Spain.

FlyBAIR joins chair in play-on-words Swiss airline names.  Will dare be next?  FlyBAIR, which calls itself a ‘people’s airline’, will be a virtual operator.  It’ll wet-lease one Helvetic Embraer 190, and it insists it’ll have a slim corporate structure, low fixed costs, and have an “uncompromising focus” on demand. 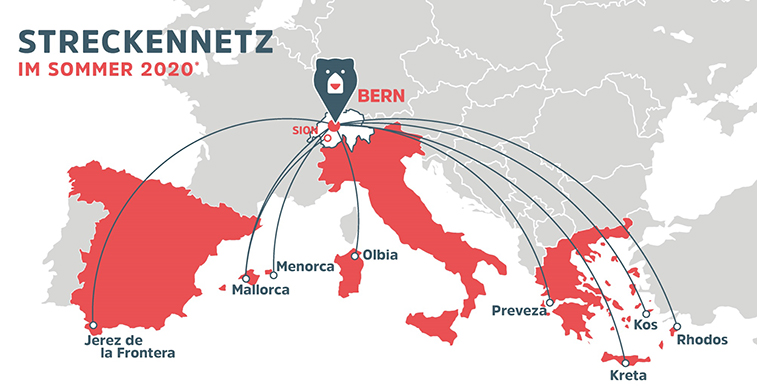 FlyBair’s first route, Bern to Palma, will take off on 2 May.

Start-up FlyBAIR has an initial eight routes from Bern, all focused on holiday destinations in Italy, Greece, and Spain. Obviously, this makes sense. Heraklion, Kos, Preveza, and Rhodes are scheduled charter with tour operators, including TUI Suisse, while Jerez, Mahon, Olbia, and Palma are scheduled and bookable on the carrier’s website.  All routes are currently unserved, except Palma: Helvetic operates it once-weekly. FlyBAIR’s first service, to Palma, will take off on 2 May at 0815.  It’ll also operate Sion – Palma twice-weekly on a W basis beginning and ending in Bern. Its minimum return fare from Bern to Palma is €355 (in May!); to Jerez, between €300-400.

Between two and six sectors per day

FlyBAIR’s E190 will generally operate from 0700 or 0815 most days.  It’ll have a 45-minute turnaround at Bern, Sion, and all destinations, and its average sector distance will be 844 miles.  Except for Tuesdays and Saturdays, when it’ll have six sectors a day, it’ll have between two and four sectors daily.  Will Monday remain half-a-day?