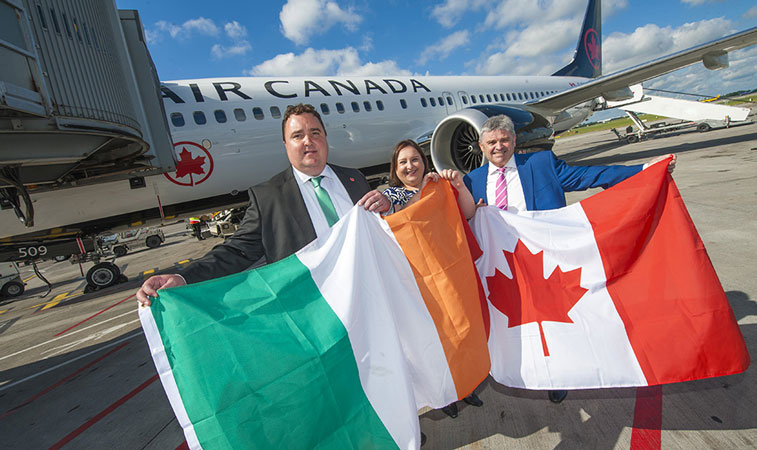 Air Canada has twice as much capacity to Europe as it does to Asia, yet Asia features heavily in the carrier’s top-20 connecting markets.  Here, Air Canada celebrates the launch of its four-weekly, summer-seasonal service from Montréal to Dublin in 2018.  It was initially operated by the Boeing 737 MAX 8, but, following the grounding of the aircraft and the growth of the airport-pair, it is now served by the B787-8 and -9.

International markets dominate Air Canada’s top-20 connecting markets, featuring 15 times. Montréal – Bogota stands out. Across all operators, this market had around 38,000 passengers in this period, with Air Canada possessing a 57% share, followed by COPA with 10%. Air Canada will begin a three-weekly non-stop Montréal – Bogota service from 2 June using the B767-300ER. Montréal has added 30 new destinations since 2015.

Asia key in top-20, but Europe not

Asia is key in Air Canada’s top-20.  Interestingly, both Vancouver and Toronto to Asia are now very similar as a proportion of the carrier’s total Asia capacity, at 46% and 42% respectively.  Montréal (10%) and Calgary (2%) make up the rest. Delhi appears three times in the top-20: to/from Calgary, Edmonton, and, perhaps surprisingly, Winnipeg.

In contrast to Asia, not one of the top-20 features a European airport. Perhaps this is from Air Canada’s European operation being twice the size as to Asia, with service (normally) from seven Canadian airports to Europe.  This is now temporarily down to five, with Halifax and St John’s to London Heathrow cut in March 2019 as a result of the grounding of the B737 MAX 8.