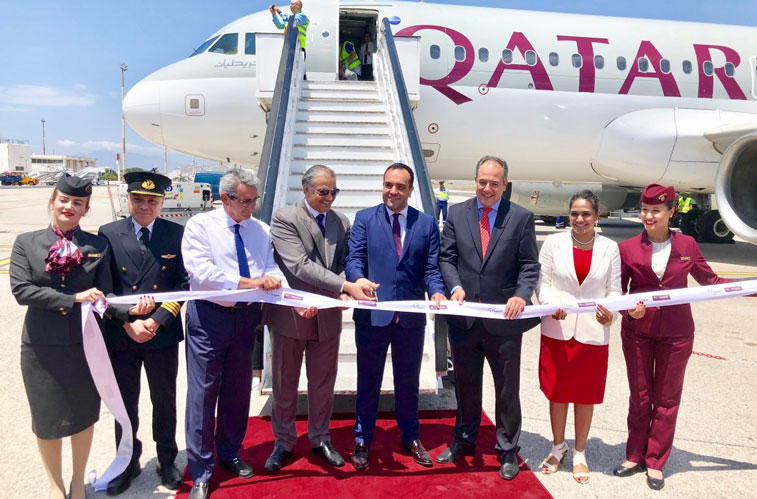 Qatar Airways has added 31 million seats to and from its Doha hub since 2010, despite the diplomatic crisis in 2017 that saw flights banned to multiple countries, most importantly to Saudi Arabia and UAE. The carrier ended 2019 with just under 50 million seats and will likely break this barrier in 2020. The A320 has been key in its new, smaller markets, including seasonally to Mykonos, Greece.

Qatar Airways has 471 movements* to 140 destinations to/from its Doha hub today, 9 March 2020, despite the impact of COVID-19.  These 471 generate most 124,000 seats for an average of 262 seats per movement.  This is clearly from widebodies flying 88% of its seats, with the B777-300ER responsible for producing 36,400 of these. Unlike Emirates, Qatar Airways itself uses narrowbodies; it is these that have partly enabled strong growth into smaller markets across Central and Eastern Europe, East Africa, and Asia.  The operator’s first routes to Central Asia – Almaty and Nur-Sultan, Kazakhstan – start next month by A320s.  Meanwhile, its longest non-stop narrow-body route remains Yangon, Myanmar, at 2,918 miles. (* As one-stops don’t involve two departures/arrivals at Doha, they’re included as one here.) 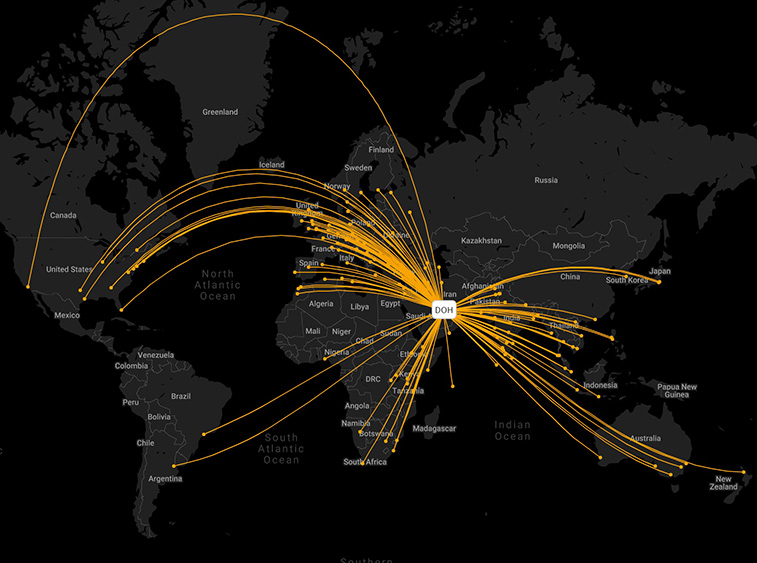 On an airport-pair basis, Doha – Kuwait leads the carrier’s top-10 destinations, with 10 departures today, seven by narrow-bodies. Across all airlines, Bangkok has 19 daily departures to the Middle East today, with Qatar Airways now number-one with seven – up from four in 2017. Stockholm Arlanda stands out with three daily departures, each by the B777-300ER. 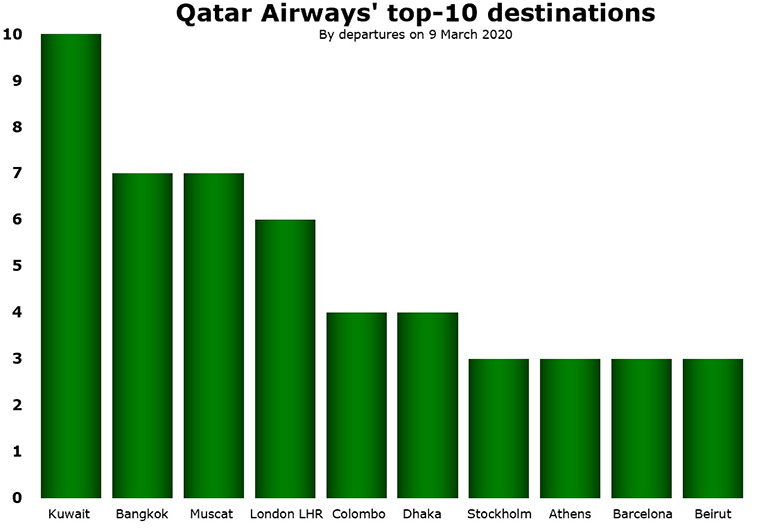 Before the 2017 ban, Qatar Airways had 17 departures from Doha to Dubai International, together with four to Dubai Al Maktoum.  Additionally, Bahrain had seven, Dammam five, and Jeddah and Riyadh four each. Source: OAG Schedules Analyser.

While South Asia is crucial for the airline from local and connecting demand, only two – Colombo and Dhaka – appear in its top-10 list, mainly from India’s strict bilateral limitations. Qatar Airways serves 11 Indian cities, yet Delhi and Mumbai are served only twice- and once-daily respectively by the carrier itself.  However, IndiGo, with which it code-shares, helps to this end. Today, IndiGo serves seven Indian cities from Doha, including Delhi and Mumbai twice-daily.

Qatar Airways has three main waves: 2300-0300 (132 movements); 0500-0900 (132); and 1600-2100 (128).  This is very similar to Emirates’.  These three waves give rise to around 30 million connecting passengers in the past year. It’s noteworthy that each wave has almost the same number of movements. As Qatar Airways has grown, its waves have necessarily become more omnidirectional, thereby enabling more connections and convenience while no doubt increasing aircraft utilisation and ground resource use.  Its busiest hour period is from 2300, with 48 movements; this arrivals bank is especially important from Europe and Asia-Pacific. It also has carrier’s most Africa arrivals, from north, west, and east Africa, feeding both Europe and Asia. 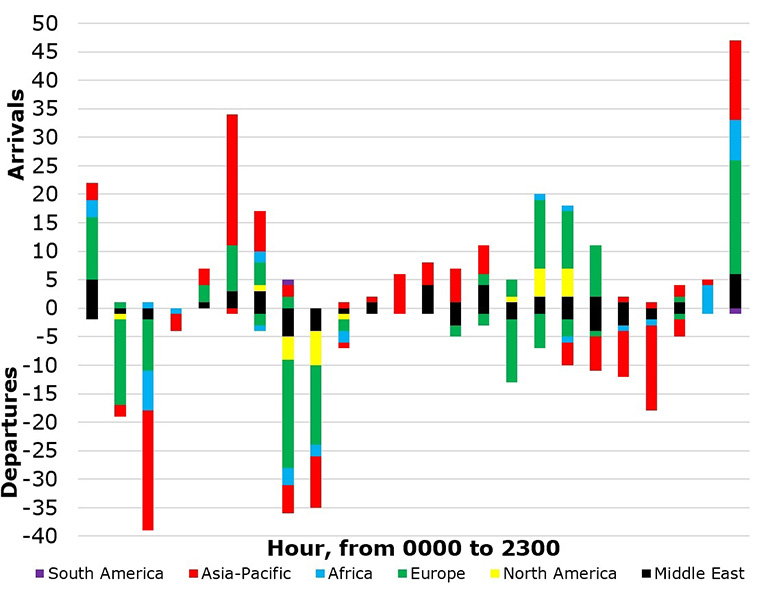 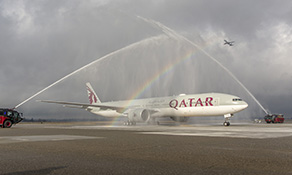