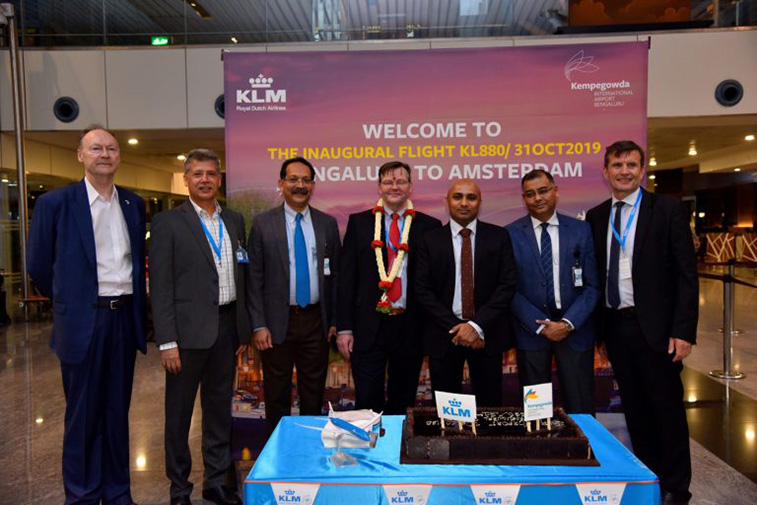 KLM started a three-weekly service from Amsterdam to Bangalore in October, with connectivity across Europe and North America. In 2020, five European airports will have non-stop service from Bangalore, with Lufthansa beginning Munich.

Bangalore Airport is India’s third-busiest, after Delhi and Mumbai.  With almost 39 million seats in 2019, the Karnataka facility recorded a CAGR of 11.5% since 2015 against 8.2% for the whole of India.  The period since 2015 was fundamental in Bangalore’s growth from IndiGo (adding 11 million seats), AirAsia India (+2.8 million), and GoAir (+2.2 million).  In all, Bangalore increased seats by 16.4 million since 2015, despite the end of long-standing Jet Airways with its 4.3 million.  By contrast, congested Mumbai added just four million: its seats were up 8% since 2015, against 72% for Bangalore.  The ‘seat gap’ between the two airports has now fallen to 17 million.  Bangalore’s new second runway and its coming second terminal (initially with capacity for 25 mppa) in early 2021 will clearly propel the airport further. 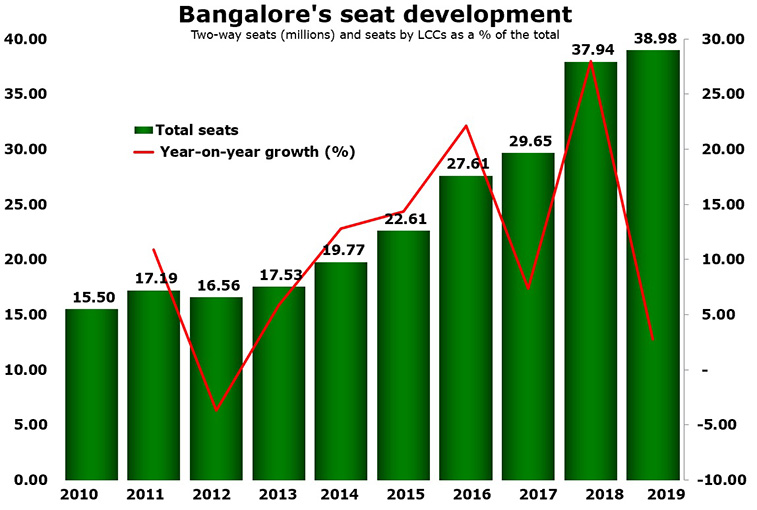 Like India generally, Bangalore Airport suffered from a significant slowdown in growth between 2018 and 2019 as a result of the fall in the country’s GDP growth rate and the consequential lower demand, together with Jet Airways’ end. Bangalore added just 1.1 million seats in this period, eight times fewer than the year before. Many fares increased, with OAG Traffic Analyser showing that Delhi’s average one-way fare increased 11% to USD$83 (excluding taxes and 20%+ fuel surcharge each way).

Despite far shallower growth, 2019 saw a host of network developments, including Ethiopian Airlines four-weekly from Addis Ababa (from October), with connectivity across Africa and to South America, and KLM three-weekly from Amsterdam (October), serving Europe and North America.  These have helped Bangalore’s airline list to reach 35 so far in 2020. More widely, Bangalore’s top-10 airlines are below. Predictably, most year-on-year growth came from IndiGo (+2.4 million; 14.9%), although GoAir (+558,000; 20.2%) and Vistara (+420,000; 55.5%) had good growth in the slow year and from much smaller bases. GoAir’s growth was from a new route to Singapore (October), the first full-year operation to Kannur and Phuket, and a 115% increase to Hyderabad. Meanwhile, Air India grew 22% YOY from multiple capacity increases, but also the full impact of its non-stop London Heathrow service which started in November 2018. 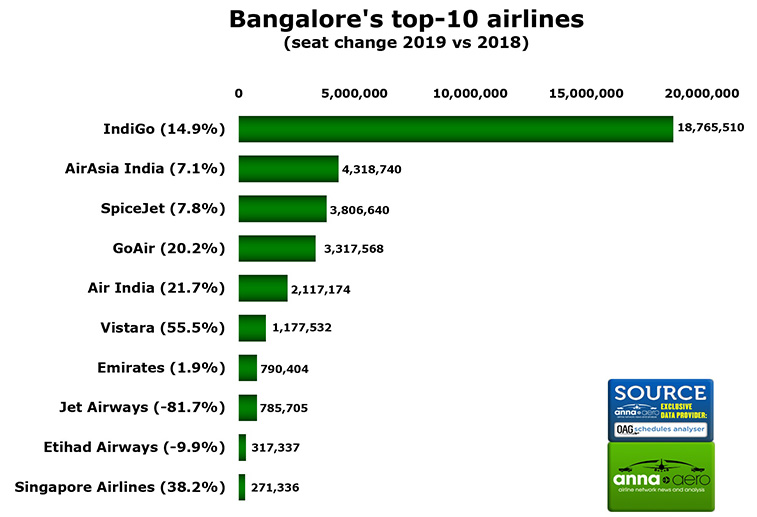 Jet Airways was Bangalore’s second-largest airline in 2018. It ended at the airport in April 2019. OAG Schedules Analyser.

Bangalore Airport will welcome its fifth non-stop European service on 31 March: a five-weekly Lufthansa operation to Munich, with very strong onward connectivity. It’ll supplement its existing daily Frankfurt service by the B747-8. Additionally, Japan Airlines begins Tokyo Narita on 2 July, while American Airlines will start Seattle on 27 October.  In 2019, Tokyo’s local two-way demand was an estimated 51,817 passengers, including 41,487 to/from Narita with an average one-way fare of $556 (plus 20%+ fuel surcharge each way that is kept by the carrying airline and also taxes).  anna.aero will explore other potential logical additions from Bangalore in another article.