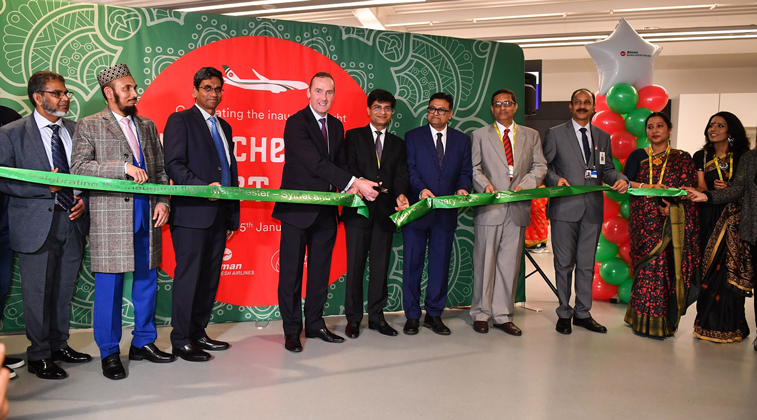 Biman Bangladesh added Manchester in January 2020 on a three-weekly basis using B787-9s. Will Seoul, Shanghai, or Tokyo be next, whether for itself or another operator?

Dhaka is the capital of Bangladesh, with the country’s population exceeding 168 million. It’s the world’s eighth most populous country, sandwiched in-between Nigeria (seventh) and Russia (ninth). Since 2014, Bangladesh’s GDP growth has averaged 7.3%, marginally greater than neighbouring India.  In 2019, total seats to, from, and within Bangladesh totalled just 16.4 million; for context, that’s nearly five million fewer than London Luton.  Not surprisingly, Bangladesh had <0.10 available seats per member of population, which shows the country’s potential at some point in the future. By contrast, India’s seats/population was nearly double, at 0.18, although that too was exceptionally low.

Dhaka had 90% of the country’s seats last year.  It has welcomed new routes including Biman Bangladesh and IndiGo to Delhi (July and August 2019 respectively); Himalaya Airlines to Kathmandu (July), SpiceJet to both Delhi and Mumbai (both July), and US-Bangla Airlines to Chennai (March). The development of Delhi stands out, even if the start dates missed half-a-year.  In 2018, Jet Airways was the sole operator, with up to 11 weekly flights; now, three compete directly.  OAG Traffic Analyser shows that 75,960 flew to/from Delhi in 2018, paying an average $203 one-way (plus 20%+ fuel surcharge each way and taxes). A year later, the average fare reduced by 45% to $111 as traffic grew 70% to 128,848.

Significantly, Biman Bangladesh started Manchester in January this year on a three-weekly basis using 298-seat B787-9s.  This month, March, China Eastern began a brand-new daily service from Beijing Daxing to Dhaka using B737-800s.  Beijing was a key unserved market from Dhaka, with 29,340 local passengers in 2019 pre-stimulation. This raises the question: where else could be served?

The table, below, summarises Dhaka’s top-15 unserved markets in 2019 by passengers and average fares, with the a fare-per-mile graph following.  Note that fares are one-way and crucially exclude a 20%+ fuel surcharge each way which airlines keep.

Rome is by far the largest unserved market in Europe from Italy having the continent’s second-largest Bangladeshi population after the UK.  However, anna.aero recommends three markets for brand-new, non-stop service: Seoul, Shanghai, and Tokyo. 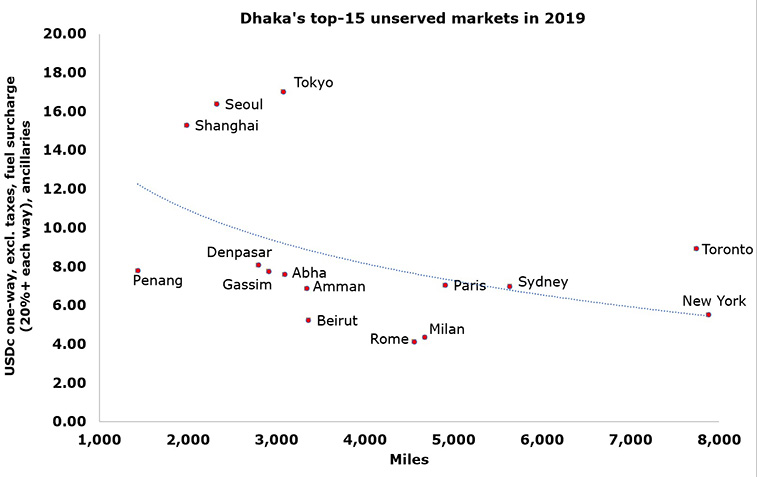 These three clearly stand out by fare-per-mile with sector lengths that aren’t too onerous and (relatively) strong average fares denoting a higher proportion of business class passengers.  Beijing, which is no longer unserved, would have been in a similar position to these three in this figure.  Tokyo, in particular, is notable, with a very high average fare and strong existing local traffic. Interestingly, Biman Bangladesh had the same idea: it expected to begin Tokyo in December 2019, citing stronger business ties and tourism nowadays, but the service did not commence. It therefore remains a key opportunity from Dhaka.