Indonesia’s seats grew sharply between 2010 and 2018, with 113 million added (!). However, 2019 saw an 18 million reduction as a result of the MAX accident, virtually all from the domestic market. It is this ‘correction’ that is leading the strong domestic growth this year, which is especially notable given the COVID-19 crisis.

With nearly 270 million people, Indonesia is the world’s fourth most populous country.  The nation’s seats have grown enormously: from 84 million in 2010 to 197 million in 2018, an increase of 113 million in less than a decade.  They did, however, reduce to 179 million in 2019, almost all from cuts at Lion Air (-10 million), Garuda Indonesia (-19.6 million), and NAM Air (-2.7 million).  This 18-million reduction, effectively all from domestic flights, was mainly from the fallout of the MAX accident. And this decline is crucial to the story that follows. 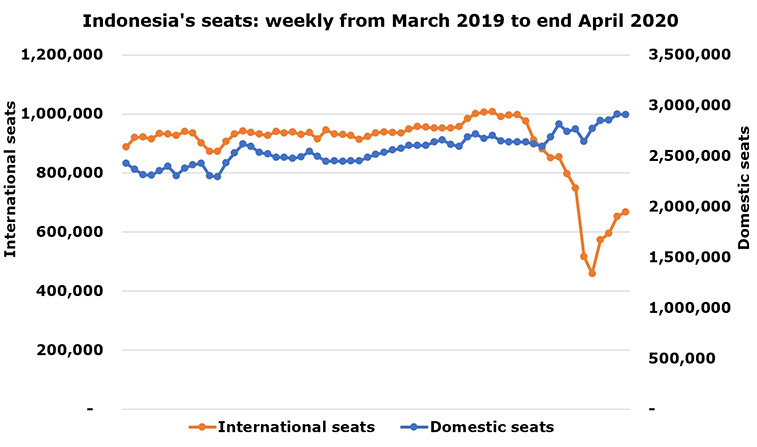 All about recovery after 2020; strong growth during COVID-19 notable

The 16.4% rise in domestic seats in March follows 12.7% in February and forecast growth – still subject to change – of 21.6% in April.  In contrast, Indonesia’s international seats are expected to decline further in April, down 33.6% year-on-year.  The performance of domestic capacity is overwhelmingly from one thing: the clawing back of lost capacity in 2019.    For Indonesia’s top-10 airports, March 2020 seats are up 17% year-on-year, but down 1.9% over March 2018.  Nonetheless, it is notable that the country’s domestic ‘catch up’ is still pushing forward at speed despite the ongoing crisis, which begs the question: what would growth be like without it?

anna.aero uses OAG data for its analysis.  Please note that the COVID-19 crisis remains fluid  as airlines around the world continue to make dramatic capacity cuts. OAG has taken several steps to ensure its data is as accurate as possible.