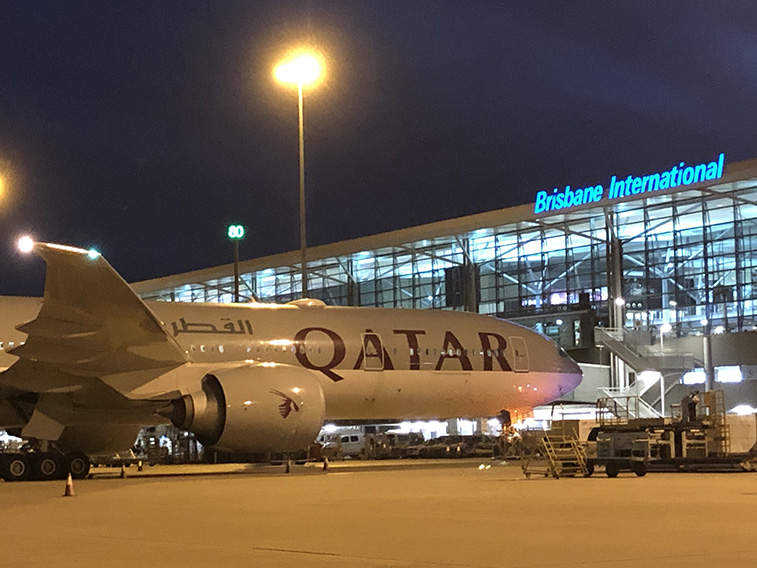 Qatar Airways has begun a temporary Brisbane service, enabled by the loosening of the strict Australia-Qatar bilateral, to repatriate passengers and continue the flow of freight. The carrier’s Australia seats passed 1.8 million in 2019, up 700,000 in two years, from the launch of Adelaide (2016) and Canberra (2018, via Sydney to have a second-daily Sydney service under the ASA).

Qatar Airways began its next Australian city – Brisbane – on 29 March. The service, which operates daily by the B777-300ER, is temporary as it’s all about repatriating passengers as well as ensuring freight continues.  It will end on 17 April.

The 7,661-mile flight leaves Doha at 2110 and arrives at Brisbane at 1720 the next day.  Returning, it departs Brisbane at 2120 and arrive Doha at 0520 the following morning. Carl Jones, Head of Aviation Development, Brisbane Airport Corporation, said: “We are working closely with Qatar Airways to support this crucial initiative.”

Qatar Airways’ CEO, Akbar Al Baker, said: “We know there are many people who want to be with their families and loved ones during this difficult time.  We are thankful to the Australian Government [due to loosening the strict bilaterals at this time], airports, and staff for their support in helping us to add additional flights to get people home, and in particular, to bring flights to Brisbane.”