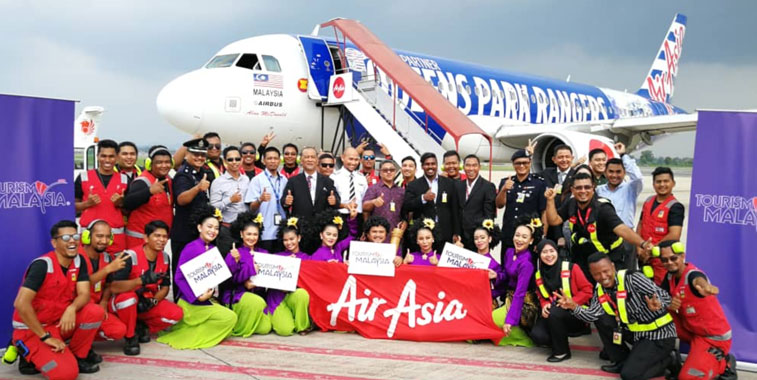 Five AirAsia AOCs expect to resume domestic service in the next two weeks: Malaysia (29 April), Thailand and Philippines (1 May), India (4 May), and Indonesia (7 May). This follows the grounding of most of the Group’s fleet in March.

“We are very pleased to be able to fly again and to serve our guests starting with domestic routes and hope to resume full operations as soon as possible,” AirAsia Group president Bo Lingam said. He added that: “We have been working closely with the airport authorities to ensure that all the relevant precautionary measures are in place to ensure a safe, pleasant, and comfortable journey for everyone.”

In the week starting 29 April, AirAsia will operate 40 weekly frequencies across eight domestic routes. These eight had 487 weekly services in the same week in 2019.  Six of those restarting are in Sabah or Sarawak on Borneo, all far away from the Malaysian capital which can’t be reached overland. This seems to make sense before ramping up others.  However, it is interesting that Penang’s initial frequency is four-weekly versus its previous 113, while Kota Bharu – similar in distance to Penang – is four-weekly against its previous 60.  That said, frequencies on all eight will be increased such that from June they are back to normal, or near-normal, levels. For example, Kuala Lumpur – Sandakan, AirAsia’s longest domestic route at 1,848 kilometres, is bookable with 24 weekly services from 1 June from USD$44.04 one-way including taxes.

AirAsia will phase back in its remaining 31 domestic routes

The map below shows AirAsia’s domestic Malaysia routes restarting from 29 April and the remaining 31 being phased back in, generally from 18 or 21 May or early June, per AirAsia’s website. For example, AirAsia’s shortest domestic route, Penang – Langkawi, at 280 kilometres and a block time of 40 minutes, will resume on 1 June with one-way fares from USD$12.97 including taxes.  It seems that it won’t be too long until the carrier’s 1,191 weekly domestic services, or 170 daily, are back in full operation.

In 2019, 97.7 million total seats were offered across the Group’s India, Indonesia, Malaysia, Philippine, and Thai AOCs, up 13%, or 11.5 million, YOY.  Obviously, its Malaysia AOC had by far the largest share of these seats (42 million).  Despite this, it was its Malaysia AOC that contributed the most additional seats YOY (3.3 million), followed closely by Indonesia (3.1 million).  Across these five AOCs, domestic seats accounted for 58 million, or 59% of the total.  Their strong domestic focus makes sense, not least as there is more likelihood of stimulating traffic and growing dominance. Most of Malaysia’s additional 3.3 million was the result of domestic growth, including from 30% capacity growth on numerous existing routes and three new routes, including Penang – Malacca in July 2019 on a daily basis. 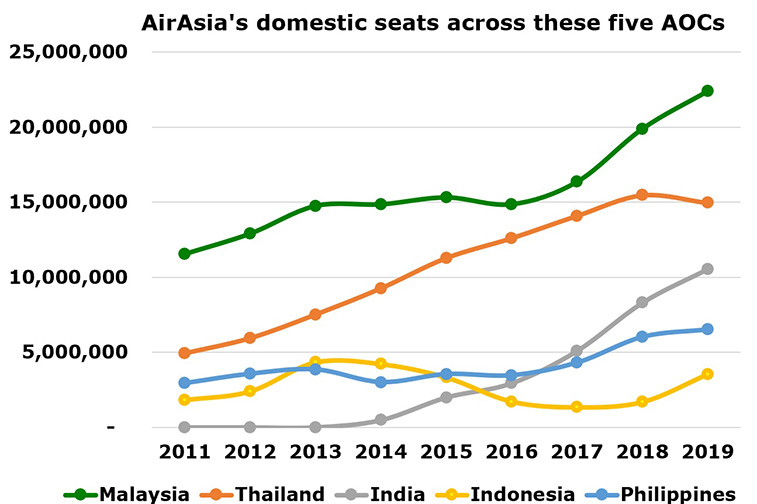