Consultants’ Corner: not ‘when’ but the ‘what’ of aviation after COVID-19

Enzo Zangrilli has had senior executive roles with easyJet, Alitalia, Menzies Aviation, Aviapartner, and private aviation companies in the Middle East. After working for Trieste Airport as Commercial Director, Enzo opened an international aviation consultancy for airports, airlines, and ground handlers. In this article, Enzo gives his views about what post-coronavirus may look like.

Not only do I refuse to speculate about when we will return to ‘normality’, but I also invite my friends and colleagues to stop doing the same. Instead, I entirely embrace the statement of Kenneth Rogoff from Harvard University:

“Until there is a better sense of when and how the COVID-19 public health crisis will be resolved, economists cannot even begin to predict the end of the recession that is now underway. Still, there is every reason to anticipate that this downturn will be far deeper and longer than that of 2008.”

This isn’t nice to read.  Nor is the International Monetary Fund’s 24-month forecast issued this April for GDPs across the world. 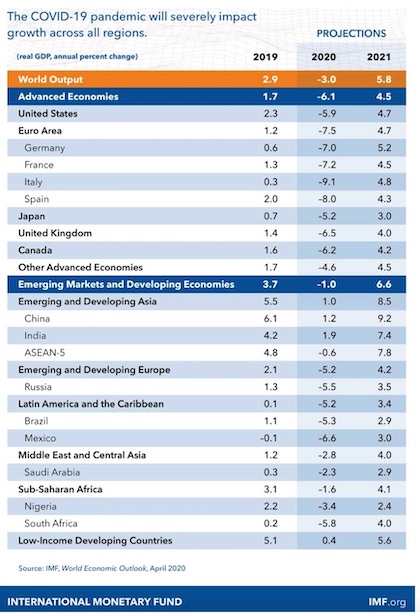 We cannot immediately translate the rebound, in the above IMF figures, to aviation globally.  And whether the recovery curve will be U-shaped (recession and quick recovery) or L-shaped (stuck in recession for the next two-to-three years), I believe that aviation will be at the end – in terms of recovery time – in both of these scenarios.

Why? Because of the disappearance of the propensity to spend money on travel by entire bands of population.  This explains why Michael O’Leary, Ryanair’s Group CEO, talks of the need for “massive price dumping” – beyond normal levels – to stimulate demand more than ever.

Given the doom-and-gloom above, we can draw some conclusions which could help in trying to think of what the industry of tomorrow may look it.

1) The lower fuel prices might help the aviation survivors to jumpstart their operations, at least if they aren’t tied too heavily into hedging contracts.

2) Small regional airlines, unless resilient and possibly operating in very niche markets whether supported by PSO agreements or not, will disappear or will be absorbed by bigger ones as ‘feeding operators’, as in the US.  In any case, a good number of regional aircraft will be returned to lessors with consequent aircraft overcapacity in the short-term.

3) We are in for some surprises on the possibilities for states and other political actors to issue aid to airlines. We have already witnessed the refusal of the UK Government, while the Australian federal government refused Virgin Australia.  Recently, the US Treasury Department requested that airlines pay back 30% of the grants allowed, i.e. $5.4 billion. Alitalia may be nationalised, but based on a dwarf fleet of 20 to 25 aircraft. All this suggests that airlines will be supported, but not as the main priority.

4) There will be thinner route networks comprised of crucial routes, which will connect hubs and primary airports. These will be operated by healthy legacy carriers, possibly with stronger and far-reaching alliance schemes and new code-share structures.

5) Long-haul, low-cost models, which have never really been successful, will be reduced to the bone, and possibly suspended for a while. Only the strongest routes will survive.

6) LCCs will, of course, survive, as such airlines will be able stimulate demand on a P2P basis. In Europe, the likes of Ryanair, easyJet, and Wizz Air, in particular, will benefit from their decentralised route networks, meaning they often aren’t overly reliant on one country.  But LCCs will have significantly lower fares in the immediate period.  This price war will leave many casualties along the way.  I wouldn’t be surprised to witness the survival of four-to-five significant LCCs in Europe: Ryanair, easyJet, Wizz Air, Vueling, and Volotea.

1) Coronavirus is the new regulator of the national plans of airports.  Where the various CAAs of this world have failed, mainly for particular interests and political interference, the virus has been able to do what they couldn’t, for instance rationalise the number of airports in each country. Within a space of 24 hours, the majority of regional airports in Europe and worldwide have closed.

Will they reopen? Most will, but not immediately. Many airports will lose their original nature and will become parts of integrated regional transportation systems encompassing trains, busses, and road mobility.

2) There is more scope, for the surviving regional airports, to be managed by or in strong cooperation with public bodies with the national mission to revive tourism, productivity, and local industries.  As such, I would not be surprised to see a number of private infrastructure management funds try and retrench in other sectors and selling their airport shares.

3) Infrastructure investments will have to be forcibly reduced to cope with lesser traffic. Someone may rethink the airport till regulations, particularly because in the next five years, with the exception of the more congested airports (major hubs and primary airports), I can’t see any substantial investments carried out in the commercial sector.  Or, for that matter, in the infrastructure domain with the exception of those required to comply with safety and security. This is not the right time for airports to be run based on the dual till system.

4) Airport taxes, such as APD in the UK, municipal taxes in Italy, and TA in France, should have already ended. That is the real aid needed by both airports and airlines and it can be done easily without reengineering the revenues structures of each country.

We are going to see more and more mergers and acquisitions, coupled with more stringent licensing public tenders in the majority of airports.  Fewer movements means fewer handlers and more people laid off. And with the far lower emotional attraction of ground handlers, they will find it very hard to lobby for financial support.

I still love aviation.  I don’t want to change industry.  And I know one thing: we will survive. And the system will too.  It will just take more of our time, effort, and planning.

This article was brought to you by Enzo Zangrilli, owner at 1Aviation Consulting. See him here.