Wizz Air expects to start its Abu Dhabi unit before this autumn – earlier than previously planned – while its scale will be bigger than the previously reported 50 aircraft. And now, it seems that the ULCC’s initial route network from the UAE capital will be – or at least include – Bucharest, Budapest, and Sofia. 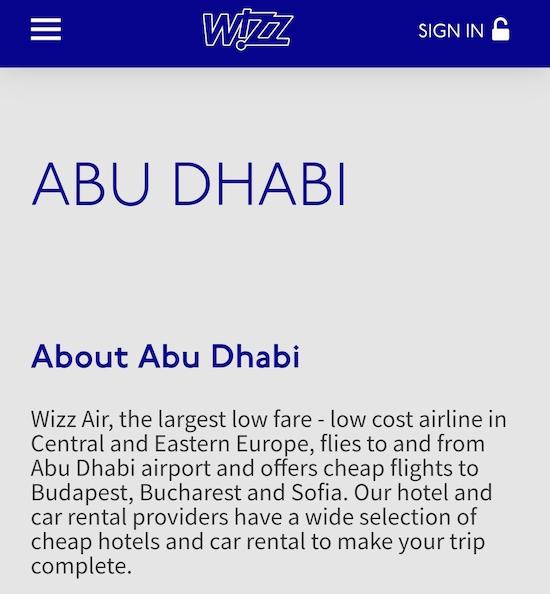 All three are currently served from Dubai Al Maktoum

Wizz Air currently serves Bucharest, Budapest, and Sofia – together with Cluj-Napoca (Romania) and Katowice (Poland) – from Dubai’s Al Maktoum.  Cluj-Napoca, Katowice, and Sofia aren’t served in the peak summer months given the soaring heat, but the rest are.  It seems straightforward to simply switch them to Abu Dhabi, while also promoting its new UAE gateway as an easy way to reach Dubai too, at around 1h 20m.

Collectively, these five had 206,000 seats last year, up just 32,400 since 2014.  This January, Al Maktoum had a daily service from Budapest, five from Bucharest, two from Sofia and Katowice, and once-weekly from Cluj-Napoca.

Bringing a niche to stimulate traffic and drive tourism

József Váradi, Wizz Air’s CEO, this week said: “We are bringing [to Abu Dhabi] a niche that does not really exist at this point in time. We’ll be stimulating the marketplace [Abu Dhabi currently has little LCC penetration] and that feeds into the strategic objectives of Abu Dhabi.”  This mainly means tourism – Abu Dhabi had 11.4 million international visitors last year – and the economic benefits this brings. Coincidentally, Air Arabia yesterday attained its Abu Dhabi AOC.

As Abu Dhabi Developmental Holding, which is partnering with Wizz Air to Wizz Air Abu Dhabi, said: “Tourism is a high priority in Abu Dhabi’s growth strategy. Significant investment is going not only into our airports but also the tourist infrastructure, including hotels, resorts, and cultural attractions.”

Little is yet known of Wizz Air’s plans for Abu Dhabi, including its network.  However, it still says it’ll serve the Middle East, Asia, and Africa, as well as Europe. Of course, some of this could be to avert attention and to keep its competitors guessing. It’s quite likely that it’ll serve Abu Dhabi – itself and also for Dubai – from multiple existing airports. Connecting the dots is a core part of its expansion strategy for the relative ease of this and the various economies that result from it.

We don’t yet know how much it is willing to adapt – or will need to adapt – its provably successful ULCC model, albeit within a broadly self-contained unit. What is known is that its productivity and cost will remain as strong as ever. This is from its clarity on stimulating traffic, the heart of its existing operation.  This will be aided by its incoming A321neos, which have a 20% cost advantage over A320ceos and 10% over A321ceos.  It expects 25 A321neos within the next 20 months.  The carrier has confirmed it won’t be deferring deliveries of its A321neos given the strong competitive advantage they’ll result in.

Bucharest, Budapest, and Sofia – together with Cluj-Napoca and Sofia – are all in Wizz Air’s top-10 airports.  So too are London Luton, Warsaw, Gdansk, Vienna, and Dortmund.  Given short runways at London Luton and Dortmund which may well prohibit fully-loaded, 239-seat A321neos to Abu Dhabi, Warsaw and Vienna are possible.  OAG Traffic Analyser shows that Vienna had 30,500 indirect passengers – from Abu Dhabi and Dubai – last year.  It was also the largest unserved European market from Abu Dhabi. Many Western European markets, whether unserved or not, have 25,000+ indirect passengers. For example, Marseille and Gothenburg – both unserved from Abu Dhabi and Dubai.

Tallinn and Vilnius next from Abu Dhabi?

Focusing on Central and Eastern Europe, anna.aero suggests that the following are contenders. All are unserved from Abu Dhabi, while only Prague and Warsaw are served from Dubai. (Tbilisi, which Wizz Air serves via Kutaisi, is also served from Dubai.)  Some, like Chisinau, Pristina, and Tirana, only have 7,000 or so indirect passengers to Abu Dhabi and Dubai combined.  However, Cluj-Napoca and Katowice had effectively zero yet were stimulated by non-stop service and low fares.  Meanwhile, Vilnius and Tallinn had 14,000 and 15,300 respectively.