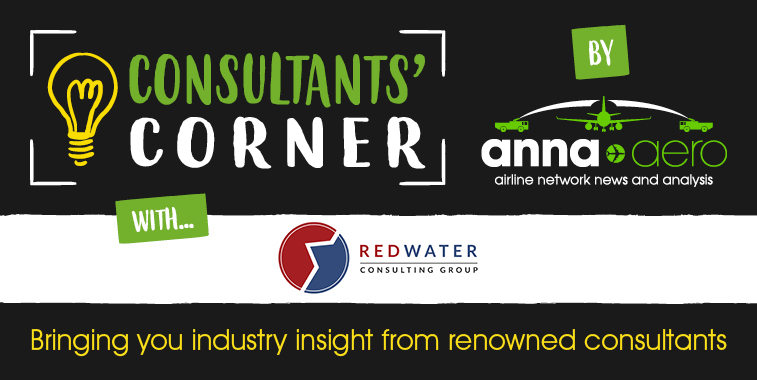 Recently, IATA Chief Executive Officer, Alexandre de Juniac, was quoting as saying “cheap travel is over”.  This in response to a question about how social distancing on aircraft would impact fares and yields for airlines. Removing the middle row seat of a single-aisle aircraft essentially reduces the number of available seats that an airline would have available to sell. For an airline, losing a large portion of supply very obviously has an impact on price and margins.

Redwood Consulting Group has taken a look at what this may mean for airfares by way of breakeven analysis for a sample aircraft within an Australian aviation context. But the analysis can be applied to any market.

We used the Boeing 737-800 as an example when analysing the Australian domestic market, as both Virgin and Qantas widely operate the aircraft across their mainly domestic networks. Qantas has a 174-seat configuration with 12 business class seats. As per the seat map of a Qantas B737-800, below, if the middle seat is blocked out in every trio of seats and one business class seat from each pair, we will end up with 58 fewer seats. This now reduces the available seats 33$, from 174 down to 116.

Source: Redwater Consulting Group.  Seats on a 174-seat Qantas B737-800 would reduce by 33% with social distancing.

The breakeven fare has been calculated for both a control (pre-COVID-19) and social distancing scenario for a typical short-haul sector, in this case Sydney – Melbourne, which has a block time of around 1 hour and 30 minutes.  The following parameters were used.

To calculate the breakeven fare, the breakeven trip cost is divided by the number of assumed passengers at the given seat load factor. The results are presented in the following graph. 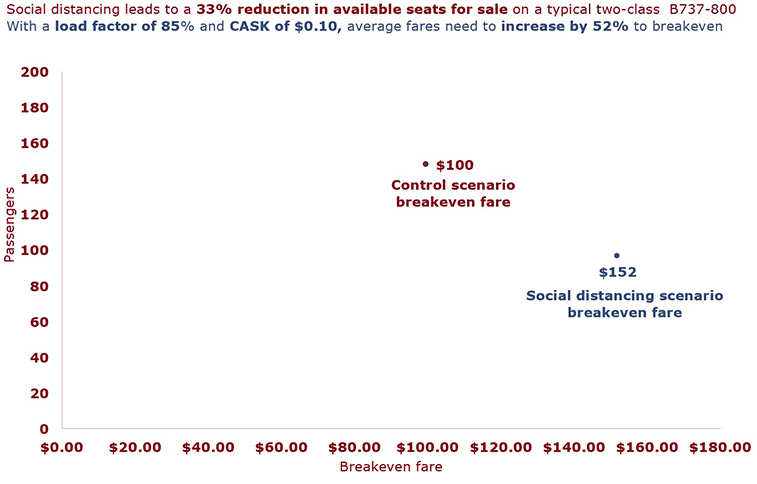 Social distancing on aircraft has caused an already complex situation to become more so. An airline’s ability to raise fares is limited. A key question is whether there will be enough demand at the new breakeven fare to achieve the required load factor. If not, then the breakeven fare would need to rise further; it depends on the demand curve for a given market. It would be very much worse still for LCCs/ULCCs.

If an airline maintains fares as they were before the social distancing came into place, they will be making a loss, even with a 100% seat load factor. In Australia, the federal government has already implemented a scheme to subsidise domestic routes to keep airlines flying for essential travellers to combat this effect.

Fundamentally, an airline cannot operate a narrowbody cost structure against regional jet capacity. It is likely that government subsidies may continue into the future or airfares will have to rise significantly to maintain financial viability. The implications of the latter would have a devastating impact on the overall size of the market. Price stimulation remains an essential aspect for airlines, particularly LCCs. If social distancing does become a new norm, we could be looking at a much smaller aviation market in the short-term.

This article was brought to you by Anthony Cicuttini, Managing Director, Redwater Consulting Group. See him here.