Ryanair is #1 in Italy; we look at fares before COVID-19 using RDC data 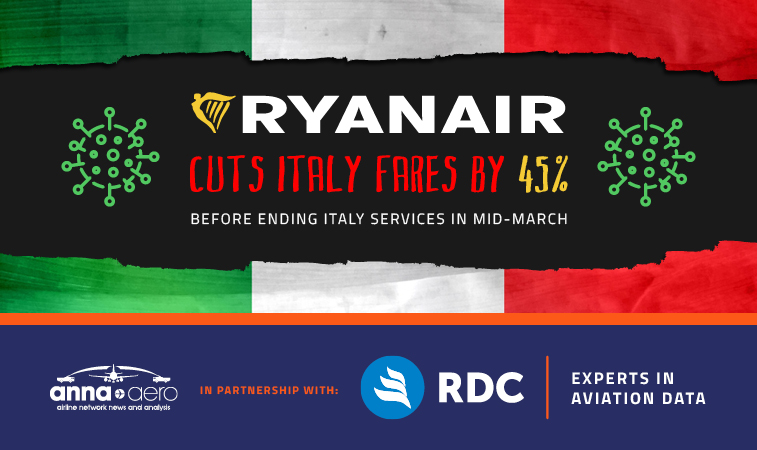 Italy is crucial country for Ryanair.  Last year, the ULCC had almost 45 million seats to, from, and within it, up 7%, or 2.9 million, YOY. This made the Southern European nation the carrier’s third-largest country market, behind the UK (52 million) and Spain (48 million).  Fast-forward to 2020, and Italy is currently the world’s second-worst affected country by coronavirus deaths and it was one of Europe’s earliest-hit.  As such, Ryanair ended all Italy flights from 13 March. 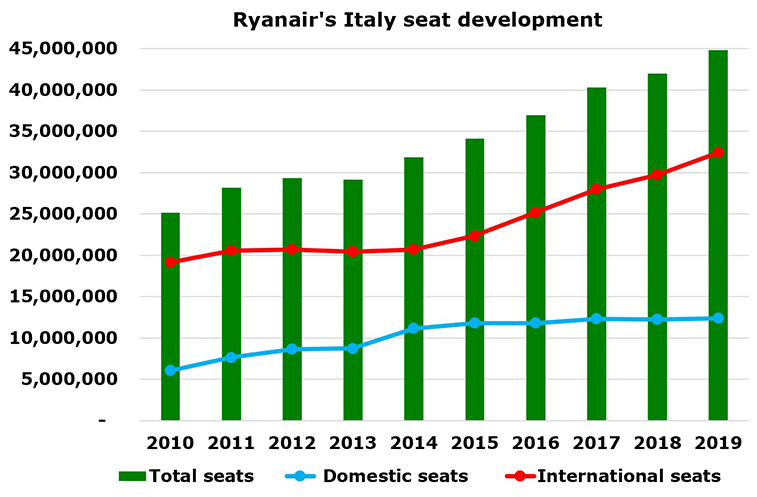 Across Ryanair’s served airports in Italy in March 2020, RDC’s Apex shows that its one-week-before-departure fares fell by 45% versus March 2019: from €80 one-way (including taxes and ancillaries) to €44.  This was the result of quarantines and very rapidly falling consumer confidence and demand.  With Apex calculating Ryanair’s operating cost per passenger for the past financial year at €47, its fare reductions would clearly impact its profitability.  However, its very low breakeven fare – far lower than most airlines – would soften the blow, and even more so given the significant reductions in the price of fuel.  While this is completely overshadowed by Ryanair grounding 99% of its fleet until June at the earliest, it nonetheless shows the available insight on a airport-by-airport, route-by-route, and country-by-country basis. 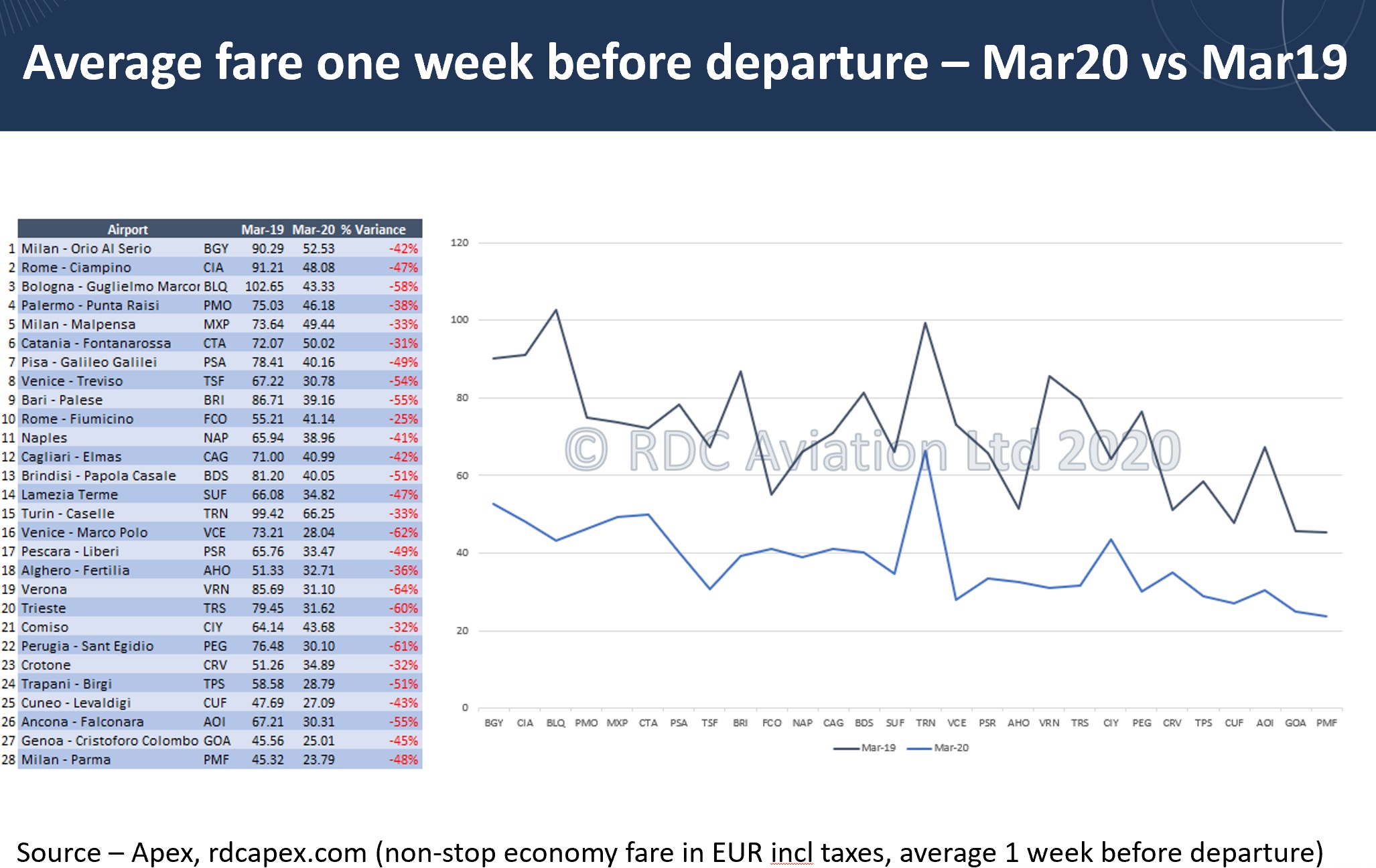 Want to see the above for your airport? Contact Iain Smith, Commercial Director: Iain.Smith@rdcaviation.com

While Ryanair has been Italy’s leading carrier for total seats since 2012, the gap over number-two Alitalia has obviously continually grown as a result of Alitalia’s on-going struggles. In 2019, the total seat gap reached its highest yet, 14 million, up nearly one-quarter YOY.  This was the combination of Alitalia almost not growing YOY (+0.7%) and Ryanair’s strong growth (+7.0%).  Ryanair’s dominance is the result of its strength internationally, with over seven in ten of its Italy seats deployed internationally last year.  This was its highest for the past few years from both strong international growth (a CAGR of 7.8% since 2015), counterbalancing that, sluggish domestic performance (1%). 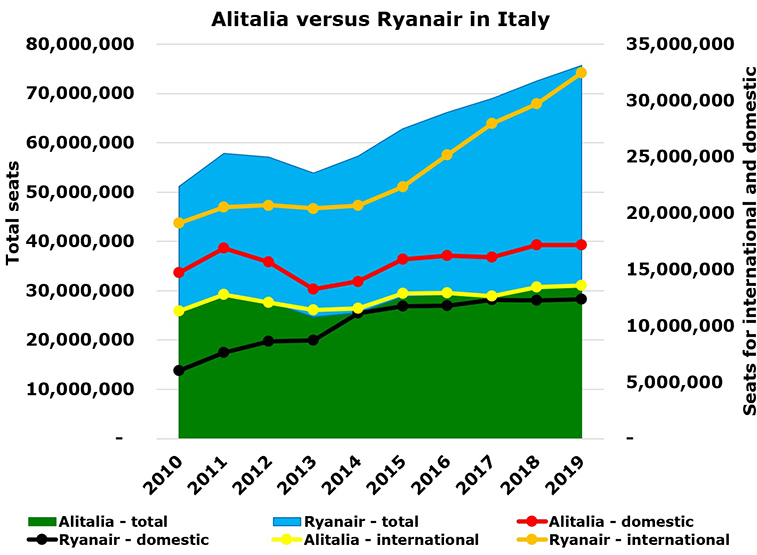 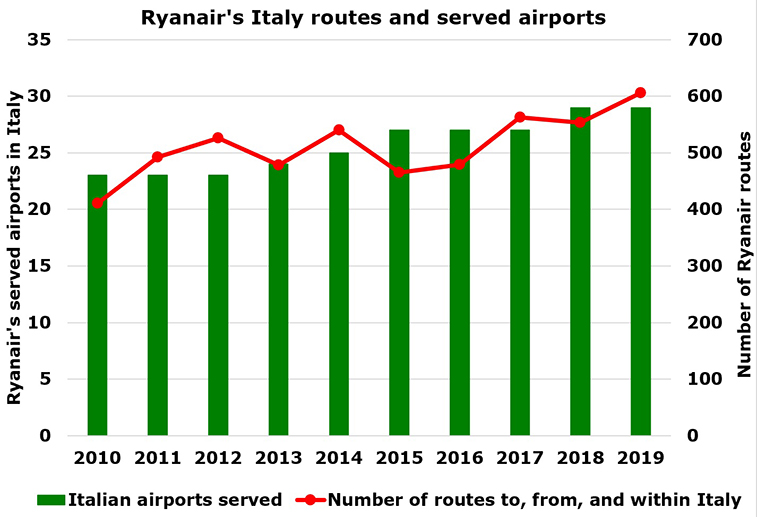 Ryanair had 59 routes from Bologna last year, up by a net of nine YOY, with its Bologna base generating almost 11% of its total Italy seats.  New routes in 2019 included Corfu, Kutaisi (served for the Georgian capital, Tbilisi), Marseille, Santander, Tel Aviv. In 2020, two new additional Greek destinations, for a total of nine, were meant to begin: Kefalonia (9 May) and Zakynthos (1 June).  Both are still bookable on its website.

Bologna one of the hardest-hit by fare cuts

RDC’s Apex shows that Bologna was one of the worst-hit Italian airports by Ryanair’s fare cuts, with a 58% decline YOY.  Looking at a selection of 20 routes from Bologna in March this year, Bologna – Brussels Charleroi saw an 83% decline, from €113.11 to just €18.79.  Ryanair ordinarily operates this route up to 10-weekly.  Valencia, also served around 10-weekly, was second-worst. 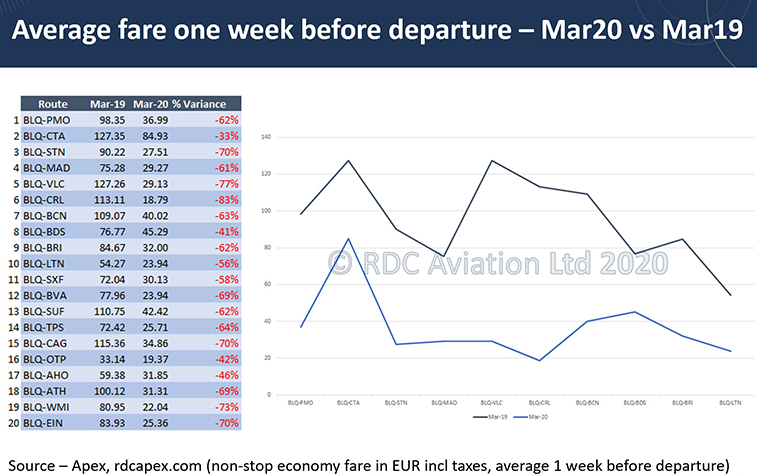 Want to see the above for your airport? Contact Iain Smith, Commercial Director: Iain.Smith@rdcaviation.com

What is even more interesting here are the one-week-before-departure fare premiums – in normal times – commanded on most domestic routes from Bologna, such as Catania (€127.35), Cagliari (€115.36), Lamezia Terme (€110.75), and Palermo (€98.35), especially given the relatively short sectors.  This is no doubt the consequence of Ryanair’s Bologna dominance and, for some routes, the relatively high proportion of business travellers. With the coronavirus number improving all of the time in Italy and the potential for international restrictions, higher-yielding domestic services are most likely to rebound quicker.