Brussels Airlines to start 3 new routes as it ends 27, amid intensified transformation 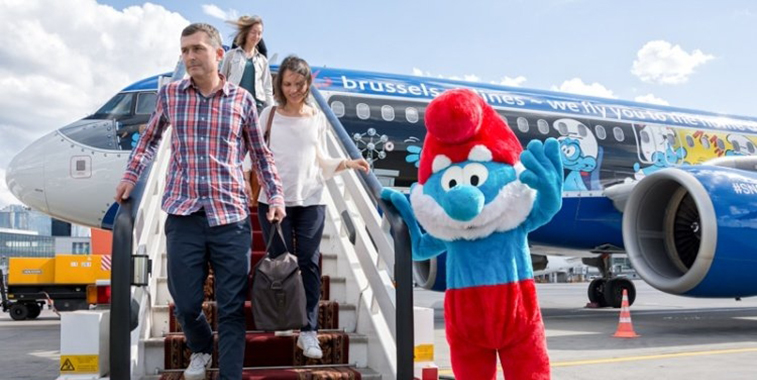 Brussels Airlines has often underperformed in itself and against other Lufthansa Group network airlines. It targets an 8% EBIT margin by 2022, with these cuts one small part of its plans.

Brussels Airlines is to begin three new destinations while ending 27, it has emerged.

It will focus more on its core offering – and that of the Lufthansa Group.  It will focus less on thinner and often summer-seasonal and inherited routes.

This comes alongside its planned fleet reduction from 54 to 38 aircraft, a 30% fall, and its 25% reduction in staff.  Its fleet reduction includes five CRJ-900s that were operated on a wet-lease basis by CityJet, whose contract has ended.

Brussels Airlines has struggled financially for many years now, both in itself and in relation to other Lufthansa Group airlines, at least in terms of financial performance and its strategic role with the Group.

Across the Group’s network airlines, Brussels Airlines had a 10% share of seats last year.  While it added the fewest seats of all four airlines since 2015 (+3.6 million), it grew the most on a percentage basis (+31%), partly aiding its underperformance. 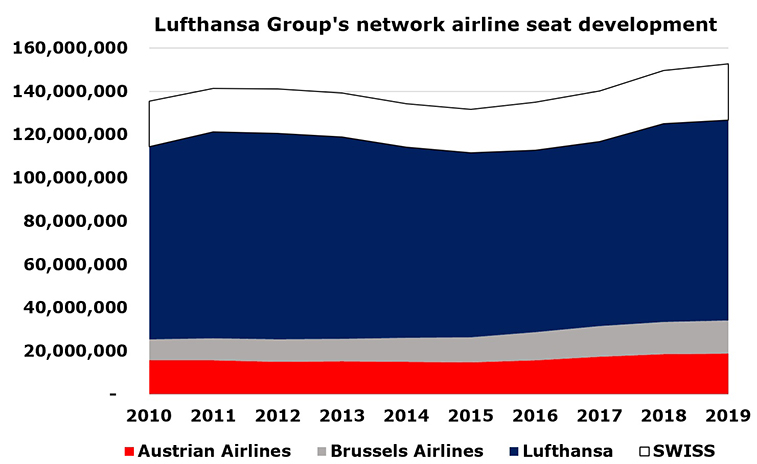 Last year, Brussels Airlines began its ‘reboot’ transformation programme, which is designed to achieve EBIT of 8% by 2022.  This 8% target is all-important to fund current and planned investments. However, it is just a stepping stone, because if it’s achieved it would still be well below that of other Group network airlines.

By 2022, Brussels Airlines was expected to achieve a ‘structurally sustainable’ foundation for going forward.  However, the on-going impacts of coronavirus have only worsened its predicament, necessitating even greater and deeper action.

… as it ends 27 destinations

All of its cuts are in Europe, with three exceptions: Conakry, Marrakesh, and Ouagadougou.

A number of cuts involve destinations that are summer-seasonal, holiday-focused, non-core, and thinner, mainly previously served by Thomas Cook Belgium. 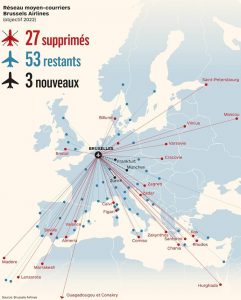 Most routes had strong direct competition and/or indirect competition from Brussels South Charleroi. Ryanair, for example, competed from both Brussels-area airports to Krakow, Marrakesh, Seville, and Valencia.

A handful of these cuts – Billund, Bristol, Hannover, Moscow, Marrakesh, Santorini, Seville, and Valencia – were already known.  Sun-Air, for example, already announced that Billund – Brussels will start this September because of Brussels Airlines’ exit.

Both Bristol and Hannover, and others like Zadar, were latterly operated by CityJet using its 90-seat CRJ-900s.  Now, Brussels Airlines’ smallest-capacity aircraft are its A319s, with 141 seats.

Unless it is willing to significantly reduce frequency – and therefore usability and lower yields – its existing aircraft will clearly be too large.

It is said that these eight destinations will return, although competitive developments in the meantime may render that unlikely.  And with a smaller fleet, a minimum of 141 seats, and a doubling down on its reboot programme, it will be interesting to see if they do.

Of the Group’s four foreign hubs, Brussels Airlines itself serves only Vienna.  In the last week of February, it operated it 20-weekly, alongside 19-weekly with Austrian Airlines.

Both Group airlines were scheduled so that neither overnighted at the other carrier’s hub, so saving money.  Meanwhile, both were coordinated to enable a range of departure times across the day from each end, so reducing duplication and costs, while increasing competitiveness and reducing the likelihood of new, direct competition.

Now, Brussels Airlines is itself to begin service to the Group’s top-three hubs.  In the same February week, Lufthansa served Frankfurt 47-weekly and Munich 46-weekly, while SWISS operated Zurich 32-weekly.

While Brussels Airlines’ timings and frequencies are currently unknown, it is very likely it, and the others, will adopt a very similar approach as with Vienna. 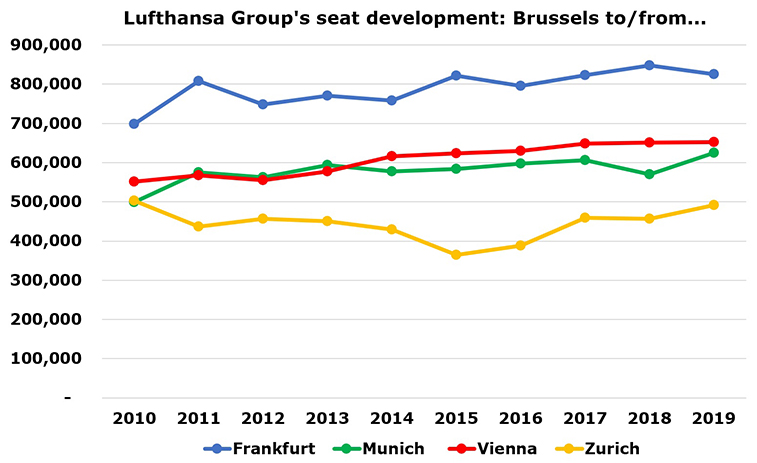