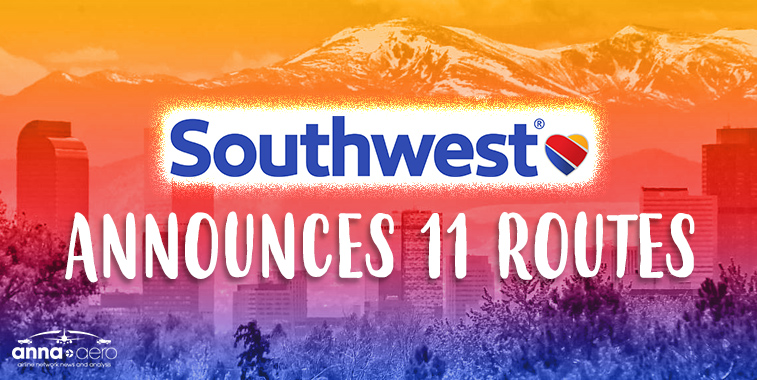 Southwest has revealed 11 routes for W20, of which nine are new and two are resumptions.

These 11 involve 16 airports across Southwest’s network of 88 US airports this coming winter.

In all, 131 weekly frequencies will be added for an average frequency of 12 per route.  This average is helped by four routes having three-daily services from the start: Long Beach to Phoenix and Louisville, Oklahoma City, and Omaha to Atlanta.

Most routes have only one competitor.  Only Nashville to Santa Ana will have no non-stop competition.  Last year, Nashville – Santa Ana had 59,000 local passengers, according to OAG Traffic Analyser, and connections are available across the eastern US over Nashville.

Denver will have 68 Southwest routes this winter

Of the 16 airports involved, Denver will have by the most Southwest routes this winter: 68. Alongside Birmingham, Little Rock, and Wichita, Charlotte will also join Southwest’s Denver network on a non-stop basis from December.

Phoenix, Dallas Love, Las Vegas, and Chicago Midway will be Denver’s top routes from the Colorado capital in the week of 17 December, based on having at least 10 daily non-stop departures. 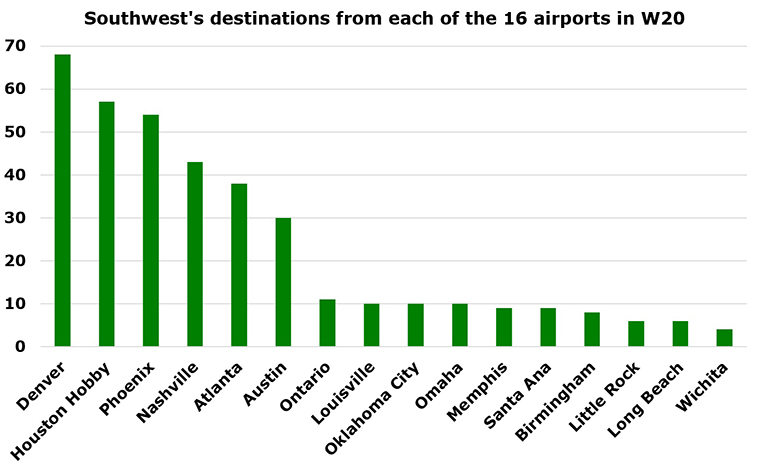 12 destinations available from Wichita over Denver

Southwest’s new Wichita – Denver service means that 12 destinations will be available over the Colorado city on a two-way basis, OAG Connections Analyser shows, as in the map below.

This will supplement the carrier’s existing offerings to them via Las Vegas and Phoenix, growing its dominance.

These 12 are based on a maximum connecting time of four hours and a maximum circuity of 130 (i.e., no more than 30% longer than non-stops would be).

In reality, the 12  have an average waiting time of 124 minutes and average circuity of just 105.  The latter highlights Denver’s position as a connecting airport atop key traffic flows.

In all, these 12 have 335,000 passengers from Wichita, OAG Traffic Analyser indicates. 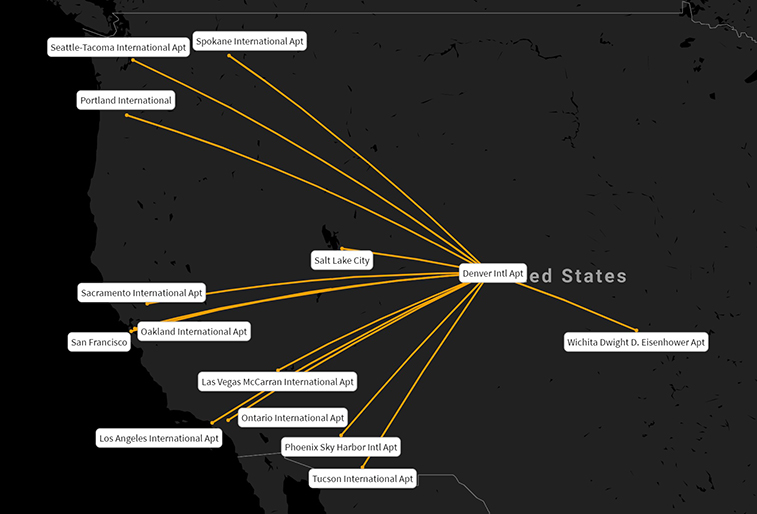 The 12 destinations available over Denver from Wichita. Based on the 17 December 2020 schedule. Source of figure: OAG Mapper.