Nuremberg‘s core catchment area comprises 4.1 million people, whose purchasing power is collectively 10% higher than the German average, according to Christian Kaeser, the airport’s Head of Aviation Marketing and Business Development.

This helps to offset an undeniable fact: Nuremberg is 167 kilometres from Munich and 224 kilometres from Frankfurt.  This is broadly equivalent to the distance from Birmingham to Heathrow.

Nuremberg’s Christmas market is one of Europe’s most famous, and it is driving the airport’s current non-stop service to London.

The Nuremberg region has a GDP of €28 billion.  This is the result of big companies, especially from the automotive, logical, medical, and health industries.

21% of the airport’s passengers travel for business reasons.

Nuremberg’s other core demand drivers include being a key location for river cruises, being one of Europe’s leading trade show destinations –  nearly 500,000 international visitors attended last year – and its Christmas market.

Its Christmas market is one of the most famous in Europe.  This explains why British Airways has limited-time winter service from London Gatwick.

… yet, Nuremberg now has just seven weeks of London service

Despite the above demand drivers – together with strong VFR demand to the UK, as Kaeser asserts – Nuremberg no longer has year-round service to London.

It now has only seven weeks a year of non-stop service: British Airways to Gatwick, typically four-weekly, to cater for the Christmas market demand.

This follows Ryanair ending Nuremberg – London because the carrier closed its Nuremberg base.  Ryanair operated up to 12-weekly services to Stansted last year.  Its schedule enabled day trips to London: arriving into Stansted at 0710 and leaving at 1935.

Because only BA remains, the city-pair now has just 3% of its non-stop passengers (based on 2019 data). 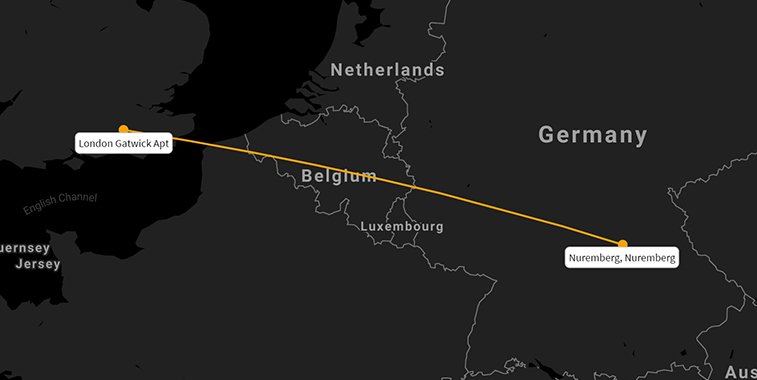 Ryanair’s Stansted service had 193,000 of these passengers, while British Airways carried the rest to/from Gatwick.

Despite these non-stop options, OAG Traffic Analyser indicates that around 30,000 flew indirectly from Nuremberg to/from London last year, mainly via Frankfurt and Zurich.  These overwhelmingly went to/from Heathrow, indicating the importance of this London airport in this market.

Heathrow also stands out for leaked passengers.  Kaeser’s leakage study shows that around 174,000 London passengers were leaked from Nuremberg’s core catchment to Frankfurt and Munich, and primarily onwards to Heathrow.

This city-pair could appeal to various airlines, post-coronavirus.

British Airways to Heathrow would be ideal to capture point-to-point business, tourist, and VFR demand, while potentially being timed to connect with North America.

Data from Kaeser shows that 124,000 passengers were leaked overland from Nuremberg’s 30-minute catchment to Frankfurt and Munich and onwards to the US alone.

In addition, over 130,000 flew indirectly to the US from Nuremberg last year, OAG Traffic Analyser indicates, with New York, Boston, and Los Angeles key.

Demand from the US comes from multiple sources beyond trade fairs, including:

Or, a four-weekly London service?

At the other end, a four-weekly year-round London service could capture some of the leisure and VFR traffic.

This could appeal to British Airways, easyJet, or Wizz Air, although on-going issues with BA over the future of Gatwick and easyJet’s Germany performance at a time of cuts reduce the likelihood of this for them.

Wizz Air could be interesting.  The carrier already serves Nuremberg with five routes and the carrier has in recent times launched various non-CEE city routes from Luton, all with a very strong leisure component, including Bergen, Lisbon, Marrakesh, Milan, Porto, Tromso, and Vienna.