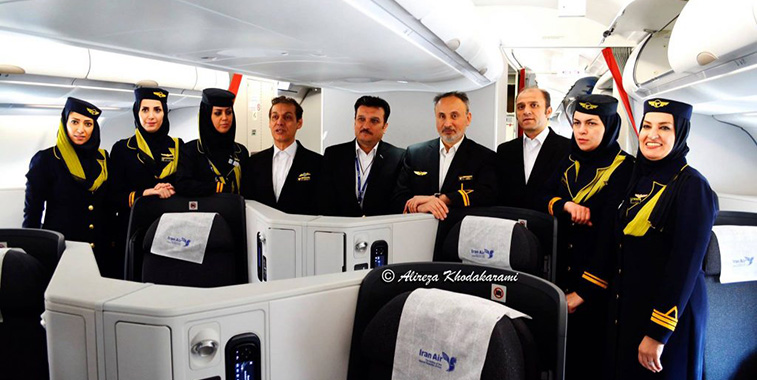 Tehran – Manchester is not a big market, with OAG Traffic Analyser showing that about 20,000 flew between the two cities last year.  Iran Air’s weekly service will be fully focused on point-to-point demand.

Not surprisingly, around 42% of passengers flew via Istanbul with Turkish Airlines last year, OAG passenger data indicates.  Qatar Airways, via Doha, saw the next largest amount (27%), followed by Pegasus over Istanbul Sabhia Gocken (11%).

Iran Air had 12 routes to Europe last year, with an almost equal tie-up between London Heathrow (69,500 seats) and Frankfurt (68,600) for first place.

With a total of almost 522,000 non-stop and one-stop seats between Tehran and Europe, Iran Air had a 28% share of the ~1.9 millions seats across all operators. 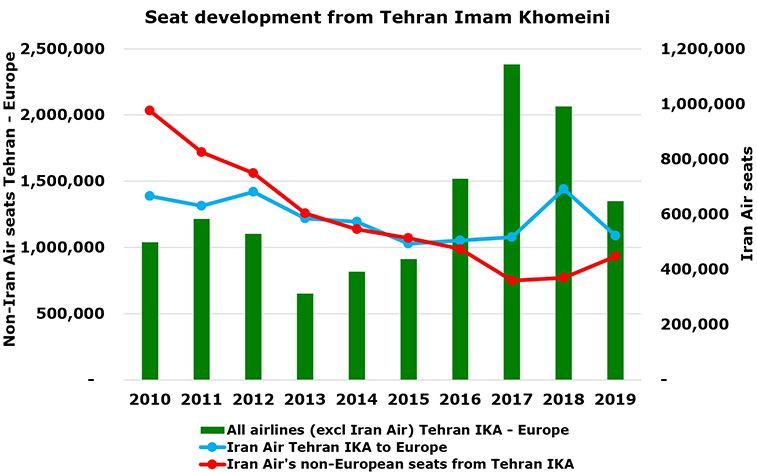 Given the on-going hardships afflicting Iran, Iran Air’s Europe seats fell by 25% in 2019 versus 2018.  Meanwhile, seats by other airlines were down by 35% partly from carriers such as Aegean, Air France, Alitalia, British Airways, and KLM ending Tehran services.

Yet, the development of Iran Air’s Europe seat capacity since 2010 has not been as badly affected as its non-European seats, which have fallen by 54% from big cuts to the Middle East and Southeast Asia.

Given the above, and more, there are large numbers of unserved – and especially underserved – European markets from Tehran.

With 80,000 point-to-point passengers last year, Düsseldorf was served by Mahan Air until that carrier was banned from serving Germany in early 2019. Copenhagen was the second-largest unserved market, with 49,000 passengers, while Munich, suffering the same fate as Düsseldorf, rounded off the top-three with 47,000.

On average, 45% of passengers in the top-10 underserved markets flew indirectly, with Amsterdam the highest by the percentage of indirect passengers (59%). 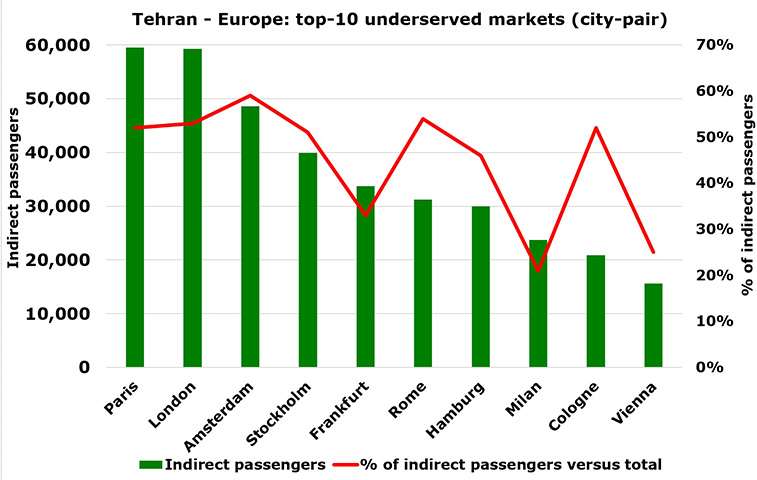