Spirit Airlines has direct competition on 84% of routes; Southwest is #1 by route overlap 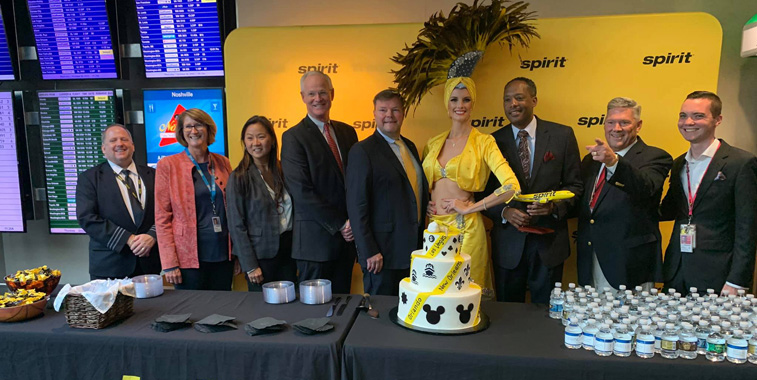 This celebration marked Spirit Airlines’ new routes from Nashville to Baltimore, Fort Lauderdale, Las Vegas, New Orleans, and Orlando. This year, Spirit has 10 routes from the Tennessee airport: the above and Austin, Cancun, Los Angeles, Newark, and Tampa.

Its top airport-pair, Ft Lauderdale – New York La Guardia, was its number-one in 2010 as well, although its seats have fallen by one-fifth, OAG Schedules data indicates, primarily from using A321s and reducing frequency. 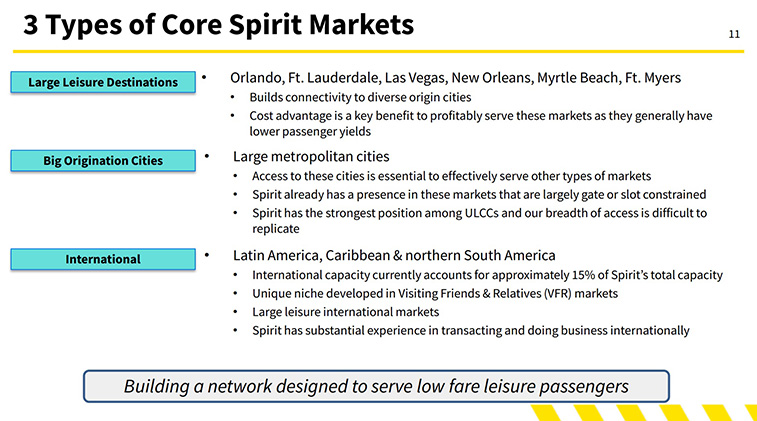 International routes down to 18% of total network

International routes have always been important to Spirit Airlines on an absolute basis.

However, the carrier’s strong growth since 2010 – it added 258 routes between then and 2019 – was clearly focused greatly on domestic service.  This pushed its percentage of international routes from almost half of its network (48%) to 18% last year.

A number of Spirit Airlines’ routes have no direct competition, such as Houston Intercontinental – Oakland, Chicago O’Hare – Oakland, and Boston – Myrtle Beach.  Spirit focuses on routes that it believes will produce margins at mid-teen or higher levels, and which have a sufficiently large population base to stimulate demand from reducing the prevailing fare by an average of 25%.

Spirit is far less interested in whether direct competition exists, as shown by 84% of its routes last year – 269 in all – having head-to-head competition with one or more of the nine airlines analysed:  Alaska, Allegiant, American, Delta, Frontier, JetBlue, Sun Country, Southwest, and United.

The ULCC’s approach to routes in comparison to start-up Breeze – which for now says it only expects to operate unserved routes – could not be starker.

Back in 2010, Delta was a key competing airline because of Spirit’s strong focus on Detroit and Florida generally.  Delta remains Spirit’s leading legacy airline by route overlap. 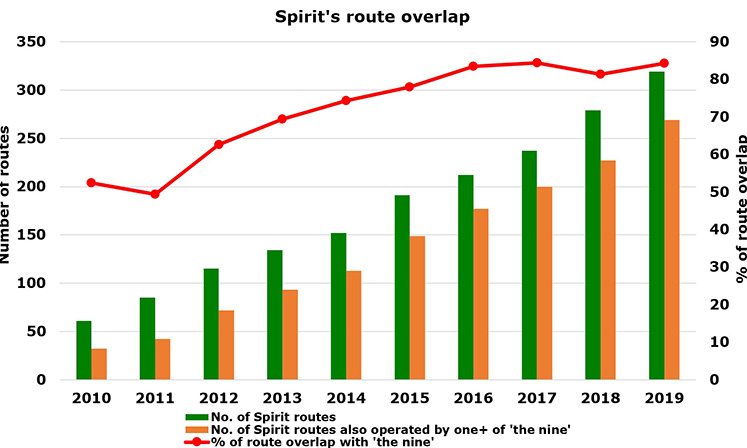 Growth in overlap with ‘the nine’ faster than Spirit added routes 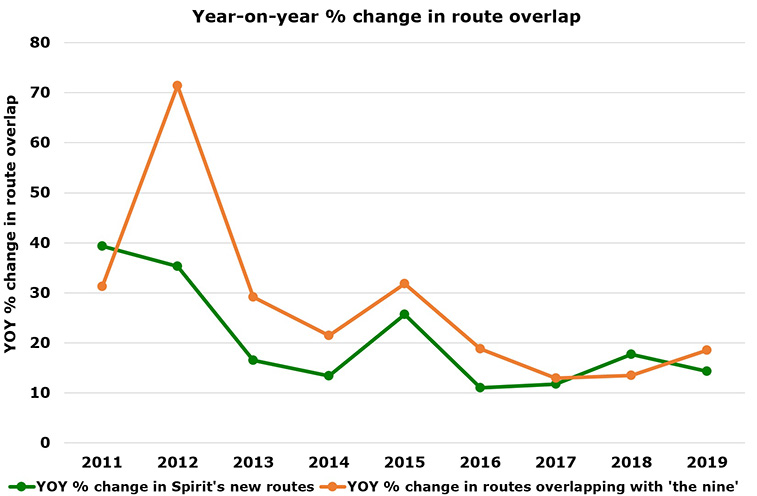 Most of the ‘route overlap’ in the past two-to-three years has come from LCCs and other ULCCs, especially Southwest and Frontier.

Philadelphia – Orlando’s ‘overlap seats’ with all of ‘the nine’ carriers will increase further this coming winter, with JetBlue’s new twice-daily service.

The degree to which they directly compete has grown faster than Spirit has added routes, at least on a percentage basis.

Of course, Spirit Airlines and Southwest do not directly compete in various major markets, including Chicago, Dallas, and Houston, with Spirit at each city’s primary airport.

Baltimore, Las Vegas, Orlando, Fort Lauderdale, and Denver are core battlegrounds for the two by overlapping seats.  This is primarily because they’re significant airports for both operators.

All five are very high-frequency Southwest markets, and last year Spirit had between 14% (Los Angeles – Oakland) and 34% (Las Vegas – Oakland) of the pair’s combined seats. 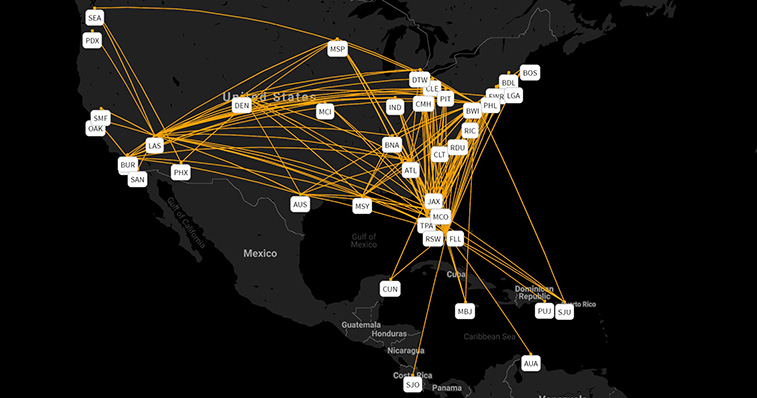 Source: OAG Mapper. The routes on which Spirit and Southwest directly competed on last year.

… while Allegiant was Spirit Airlines’ ninth competitor of ‘the nine’

Not surprisingly, Spirit had the lowest route overlap with Allegiant, with just 10 routes last year.

Spirit has since ended Asheville – Fort Lauderdale.  Despite Allegiant’s low-frequency approach given it broadly operates on days when demand is stronger, Allegiant had higher frequencies and seats on this airport-pair than Spirit – with this route being Allegiant’s number one across its whole network by seat capacity and frequencies.

In the week starting 1 October, Allegiant will operate 17-weekly on it.