easyJet to close Stansted, Newcastle, Southend bases; a loss of up to 2.8 million departing seats 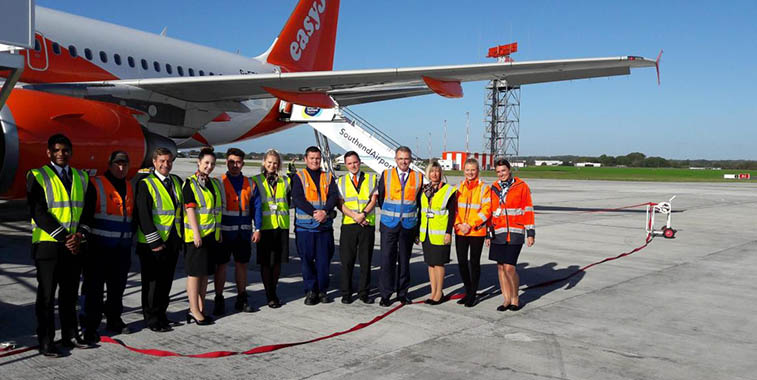 easyJet has revealed that it is to close its long-standing bases at Stansted and Newcastle, together with its base at London Southend.

Details are currently scarce, but the carrier has said that it expects the airports to remain part of its overall network.

Airports are still to be served?

What routes will remain is currently unknown, with any continuing routes necessarily using non-based aircraft.

This poses a problem: easyJet’s route networks from these three bases primarily revolve around traditional sun-and-spade destinations, together with some core city destinations.

It has few bases at them from which non-based aircraft could operate, and W flights would – especially for destinations further south – potentially be problematic in terms of duty times. However, expect some core routes to remain.

Separately, easyJet is also expected to cut 16 aircraft at Berlin, and potentially services within Germany, as a result of the airline losing an estimated £84 million from its German operations in the year to March 2020.

The UK is – and will always be – fundamental to easyJet.

easyJet serves 18 UK airports, of which 11 are bases.

To eliminate double-counting of domestic services, the following highlights the carrier’s 11 UK bases by 2019 departing seats in comparison to 2018.

Newcastle’s departing seats fell by 3.5% YOY, while Stansted’s was flat with 0.3% growth.  Southend’s increased by 18.8%, mainly due to its new Sofia service and good YOY growth to Alicante, Amsterdam, and Prague. 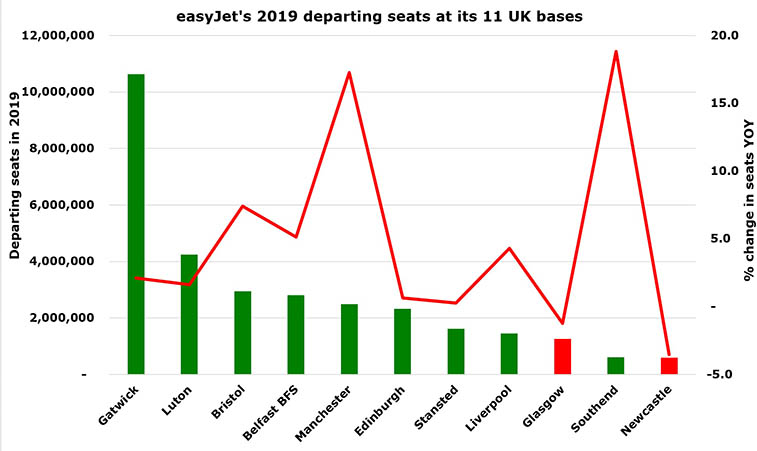 Yet, the picture is different if the timeframe is widened 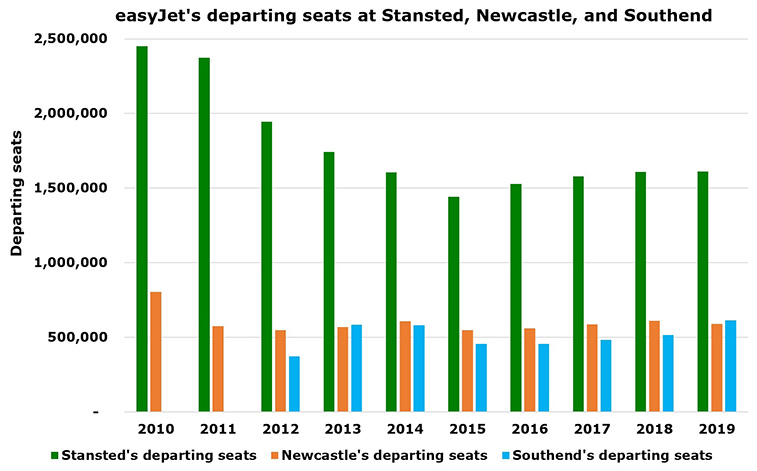 Direct competition on 81% of Stansted routes this year…

easyJet has 26 routes from Stansted this year, the carrier’s website shows, with Bastia and Keflavik cut from last year.

On a scheduled basis, 20 of these – 81% – have direct competition with other carriers, according to OAG Schedules Analyser.

Jet2 competes head-to-head with easyJet on 14 routes from the Essex airport, while it is eight with Ryanair. (Of course, all of this assumes that routes are operated given coronavirus.)

Only easyJet’s Amsterdam, Bilbao, Paris CDG, Glasgow, Ljubljana, and Munich had no direct competition from Stansted.

Meanwhile, easyJet has 14 routes from Newcastle this year, with Berlin SXF and Rhodes cut from last year.

easyJet is used to competition – but it is generally also used to dominance.

easyJet relaunching its holiday division late last year might – to some degree –  indicate the significance it puts on competing with Jet2. 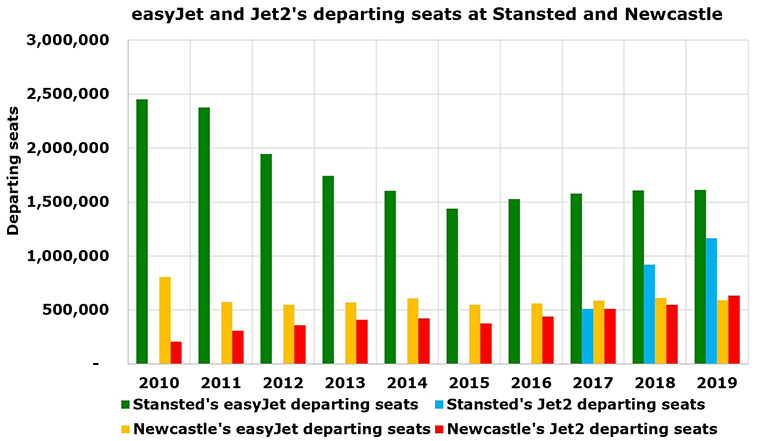 Only Southend bucked the trend, overtaking Newcastle’s seats, although its growth has been relatively sluggish between 2012 and 2019: up by only 241,000.

This is partly from a lot of chop-and-change in its Southend network.

While traditional sun-and-spade markets – especially Alicante, Malaga, Malta, Menorca, Murcia, Palma – have grown well over the years on a percentage basis, others have not.

Barcelona, for example, had half as many seats as a few years ago, while the likes of Belfast BFS, Berlin SXF, Edinburgh, Krakow, Lyon, Newquay, and Venice have all been cut.

It seems that Southend may be especially good for sun-and-spade markets, together with some winter skiing and core big cities. 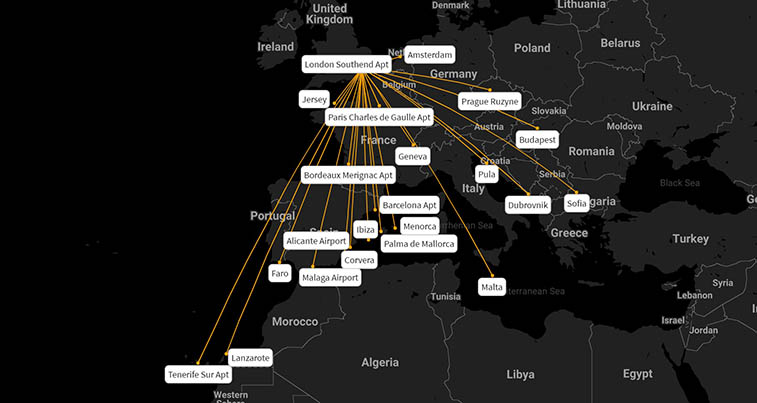 London focus on Gatwick and Luton

The loss of easyJet at Southend and Newcastle will be significant, as the carrier had a 47% and 30% share of seats respectively last year.

easyJet’s departing seats at Luton and Gatwick have grown strongly and broadly consistency.  However, Wizz Air’s growth at Luton – and the ULCC’s increasing move into traditionally easyJet markets of Greece, Portugal, and Spain – will be a worry.

easyJet will try to grow its presence at Gatwick, especially given the potential downplay or elimination of the airport by British Airways – and Virgin Atlantic ending Gatwick.

And according to ACL’s initial coordination report, Wizz Air has acquired 196 slots at Gatwick from this winter, although as yet nothing has been announced. 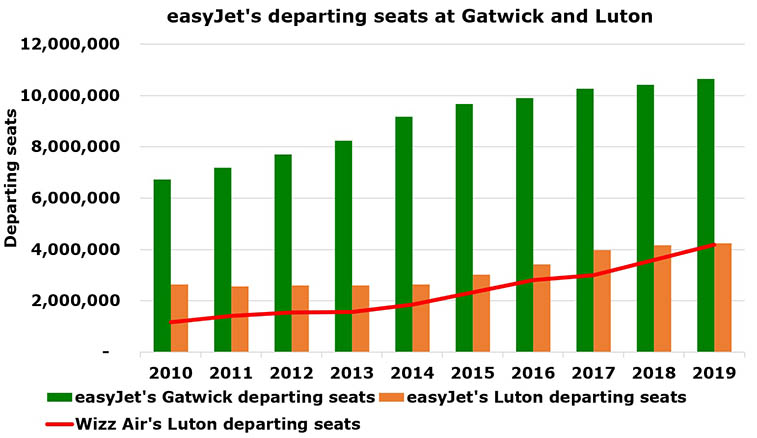