Qatar Airways to serve Toronto; we analyse connections and look at MEB3 to North America 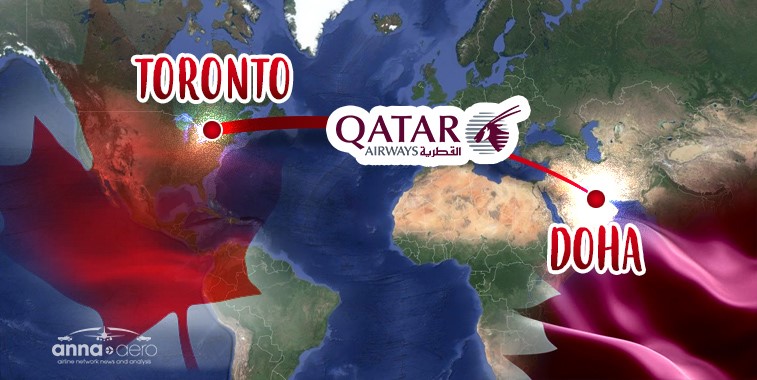 Qatar Airways has revealed that it is to start a three-times-weekly service from Doha to Toronto, with its first flight taking off on 4 July – just five days after the route was announced.

Toronto will be Qatar Airways’ second destination in Canada after Montreal, which is served four-weekly.

A tough ASA that has loosened

Canada has tough bilateral restrictions with Qatar – and other Middle East nations – as a means of avoiding what it considers would be excess capacity, and therefore a threat to other carriers.

Qatar Airways has served Montreal for nine years – since June 2011 – now on a four-weekly basis. This was because of the ASA, which limited weekly frequencies to three to any two places in Canada with a maximum of 335 seats per flight.

The MEB3 carrier fully used its allowance for years, so it could not grow its Canada offering, except by up-gauging to its maximum seat allowance.  So relatively little Canada growth, until now – from an increase in its permitted weekly frequencies.

Emirates and Etihad serve Toronto, while Turkish Airlines serves Montreal, Toronto, and – from this September – Vancouver. Turkish Airlines benefits from a more liberal regulatory environment and from its Star Alliance membership, of which Air Canada is also a member.

Qatar Airways’ new Toronto service will depart Doha at 0830 and arrive back the next day at 1615.  Not surprisingly, these timings correspond to the airline’s general North America departures/arrivals, including to/from Montreal. See here for our analysis of Qatar Airways’ Doha hub. 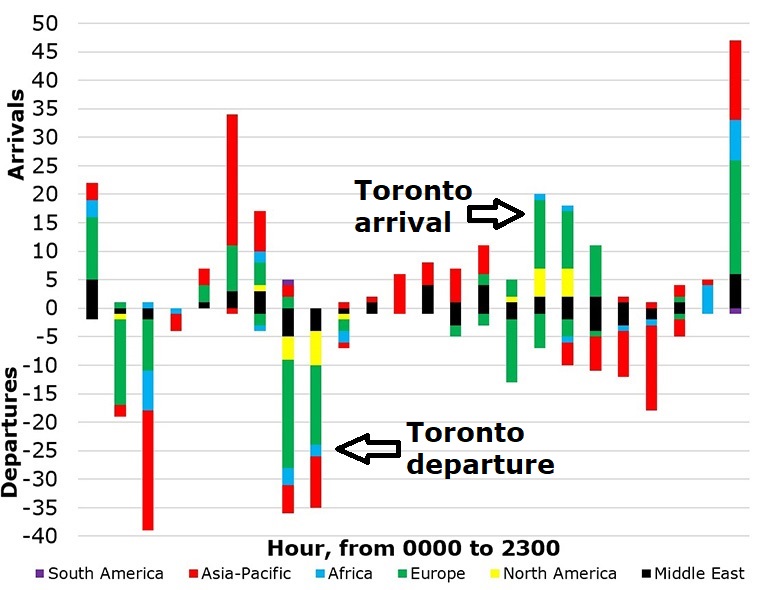 33 two-way connections over Doha; a market of ~1.8 million

Based on a roughly four-hour connection window and with less than 30% circuity, 33 destinations will be connectable on a two-way basis over Doha.  These 33, together with Doha, had around 1.8 million passengers from Toronto last year, according to OAG Traffic Analyser.

Of course, the majority – 18 – of these 33 are within South Asia, especially India.

Around two-thirds of Emirates’ Toronto passengers last year were to/from South Asia, OAG traffic data indicates. For Etihad, 80% were to/from this region. For both carriers, India was, of course, the largest country. 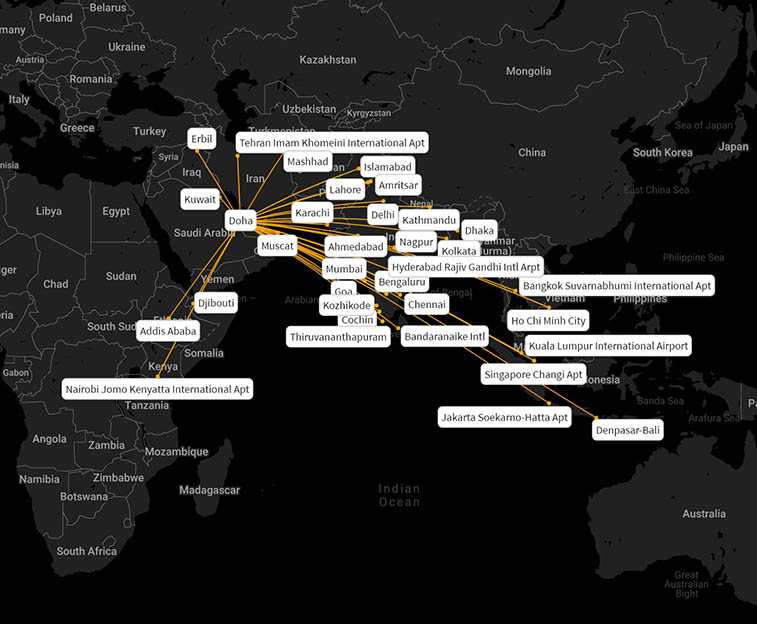 Emirates was the market leader, with a 41% share of seat capacity.  Qatar Airways was third-placed with 24%, just behind Turkish Airlines.

The decline in seats between 2016 and 2019 exclusively involved the US, with three of the four airlines reducing such seats in this period.  Etihad Airways cut US capacity by 39%, Emirates by 8%, and Turkish Airlines by 5%.

This was from the spat between the US3 and the MEB3, together with US policies, excessive US competition amongst the MEB3, and rationalising seats and frequencies from overcapacity. 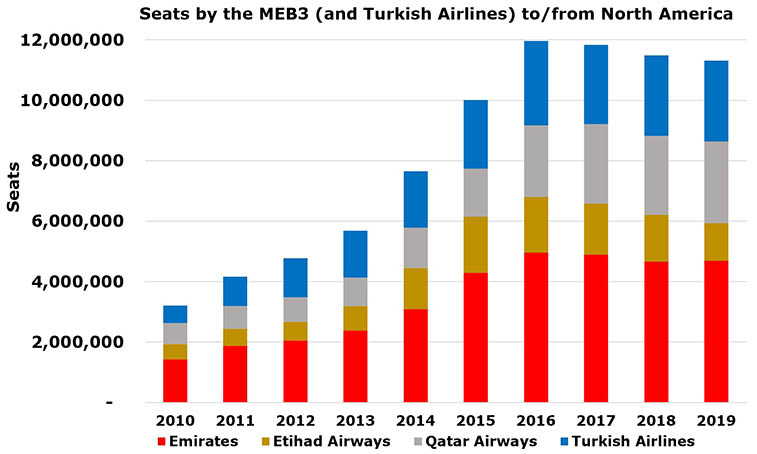 Big changes and cuts, but…

Somewhat counteractively, Emirates introduced Fort Lauderdale in 2016 and Newark (via Athens) in 2017, the latter helping to counteract the reduction at JFK.

Interestingly, Qatar Airways grew North America seats by 13% – or 283,000 –between 2016 and 2019 from the introduction of Atlanta and increases to Boston, Dallas, and New York JFK in particular – presumably partly the result of cuts by others.

US down, Canada up; Qatar Airways may become #3 to Canada now

While Qatar Airways ranked third for North American seats last year, it was second for US capacity – clearly aided by its expansion and the decline of others.

US seats were 11x greater than Canada’s.

Yet, Qatar Airways was last-placed for Canada seats, despite experiencing 38% growth between 2016 and 2019. By comparison, Emirates grew Canada capacity by 63% and Etihad by 68% – the result of both carriers adding two additional weekly frequencies in 2018 from a loosened bilateral.

Turkish Airlines’ growth was from the doubling of weekly frequencies to Toronto and by the 2014 addition of Montreal.

Qatar Airways may become the second-largest operator, of the MEB3 and Turkish, to Canada. 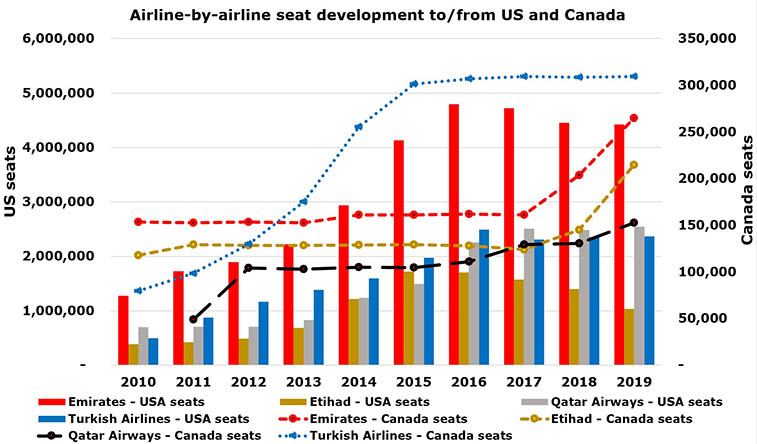