Wizz Air Abu Dhabi has announced its first six routes from the UAE capital using its own IATA code and two A321s. With an average distance of 2,572 kilometres, Athens, Alexandria, Kutaisi, Larnaca, Odesa, and Yerevan will all begin.

Its first service will be to Kutaisi, with a scheduled pushback time of 0710 on 1 October.  Later that day, Odesa will depart at 1125.

In late June, Wizz Air attained a UAE AOC and was allocated the code 5W.

Nothing out of the ordinary

Currently, there is little evidence – beyond a new unit and Middle East base – of anything out of the ordinary for Wizz Air Abu Dhabi.  Like with its other AOCs, its new routes are mainly new, low frequency, and thin.

This is likely to continue to be the case for now, with many routes served from Dubai that are not served from Abu Dhabi.  However, its parent has big ambition for the carrier.

All six destinations are currently served or announced by Wizz Air, suggesting – at least for now – how important connecting the dots will be for ZW as it is for the Group.

But it will become less important as it moves towards its grand plan. 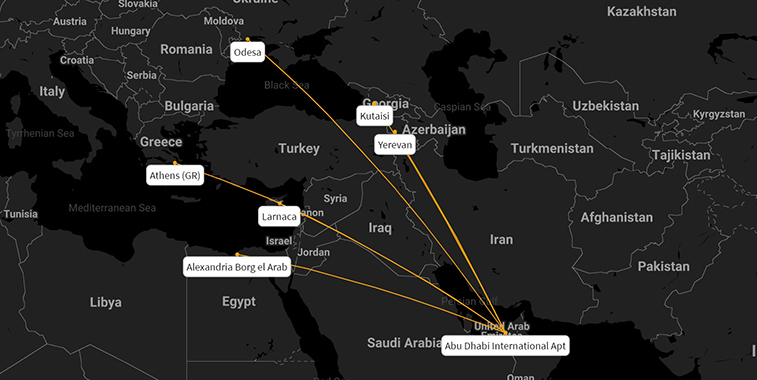 Alexandria stands out.  It is the Group’s first route not connecting Europe.

It is the Group’s first African city outside of Morocco and its second destination – after Marrakesh – on the continent.

An initial two A321s, but big gaps in schedule

Wizz Air Abu Dhabi is expected to start with two 239-seat A321neos. It is anticipated that the airline will have six in service within the first six months.

Looking at the schedule of its first two machines, there are two things that stand out.

Firstly, big gaps in the schedules of both aircraft, meaning more new routes willl likely be announced soon.  The ‘gap’ suggests they may be sub-three-hour sectors, possibly within the Middle East.

Secondly, the block times are off across most of these routes.  For example, while Wizz Air has 5h 50m for Abu Dhabi – Athens, Etihad has only 5h 5m.  From Dubai to Yerevan, Wizz Air has 4h 15m against 3h 10m for flydubai and 3h 5m for Air Arabia.  This extends ‘allocated time’.