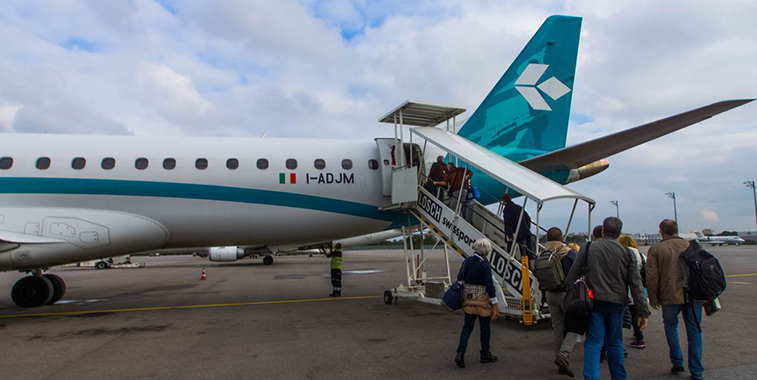 Air Dolomiti has announced two new routes: Verona to both Berlin and Dusseldorf.

Both start in just over two weeks using the carrier’s 120-seat Embraer 195LRs, and will complement Air Dolomiti’s existing Verona to Frankfurt and Munich services.

Surprisingly, neither route is currently operated.  However, Berlin was last served by Ryanair (from Schönefeld) in 2018 and before that by airberlin (Tegel until 2013) and Germanwings (Tegel until 2010).

Düsseldorf, meanwhile, was last operated by airberlin in 2013.

Camillo Bozzolo, Aviation Sales Director of SAVE Group, of which Verona is one part, said: “We are particularly pleased to announce the direct flights to Berlin and Düsseldorf, which further strengthens the commercial offer of Air Dolomiti at Verona. The two new routes respond in a concrete way to the strong demand for both inbound and outbound tourism connections between Italy and Germany, for which our territory is a reference market.”

The Italian carrier had almost 2.8 million seats last year, up by over one million – or 63% – YOY.  This was the result of inducting additional aircraft into its fleet and particularly from:

These routes were effectively transferred among members of the Lufthansa Group.

…with the carrier all about Frankfurt and Munich…

Air Dolomiti has for years effectively existed to feed Lufthansa at its Frankfurt and Munich hubs.

This is shown by 71% of Air Dolomiti’s scheduled seats last year (excluding one-offs) being to/from Munich and the rest to/from Frankfurt, according to OAG Schedules data.

This present year sees new routes within Italy from Florence

Air Dolomiti’s new Verona – Berlin and -Dusseldorf services will join its other new routes this year: Olbia – Munich, and Florence to Bari, Cagliari, Catania, and Palermo.

Its focus on Florence – with Cagliari, Catania, and Palermo only served from the Tuscan airport – means that the airline’s Italian network has risen to 15 airports.

Last year, 94% of Air Dolomiti’s seats were between Italy and Germany, down from 100% because of beginning Linz/Graz to Germany.

It remains to be seen if the regional operator’s Florence routes spells a greater future divergence from Germany.