KLM to restart Southampton; will have 44 two-way connections over Amsterdam 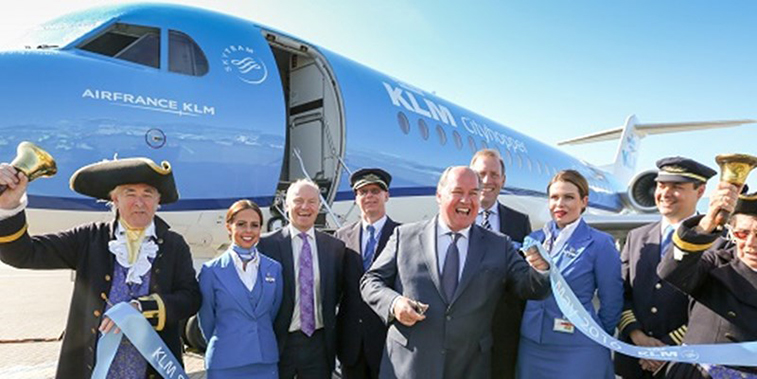 The Fokker 70, as in this photo, initially operated KLM CityHopper’s Amsterdam – Southampton service from May 2016, just as this aircraft operated many of the airline’s UK services. But it transferred to the Embraer 175 from early the following year, and remained until the service ended. Now KLM will relaunch Southampton following the end of flybe, with this market previously seeing up to 234,000 passengers.

KLM has announced that it will be relaunching Southampton with a once-daily service from 31 August.

The 450-kilometre service will be operated by KLM CityHopper’s fleet of 88-seat Embraer 175s.

This comes after Southampton – Amsterdam’s upheaval: after many years, the route was unserved following the end of flybe in March this year.  And KLM ceased the route in March the previous year.

flybe’s capacity increase of 9% last year was the start of it clawing back removed capacity following the arrival and growth of KLM.

The peak year for both airlines combined was 2017 with almost 332,000 seats – a significant volume. In this year, both airlines had up to six daily flights on this airport-pair. 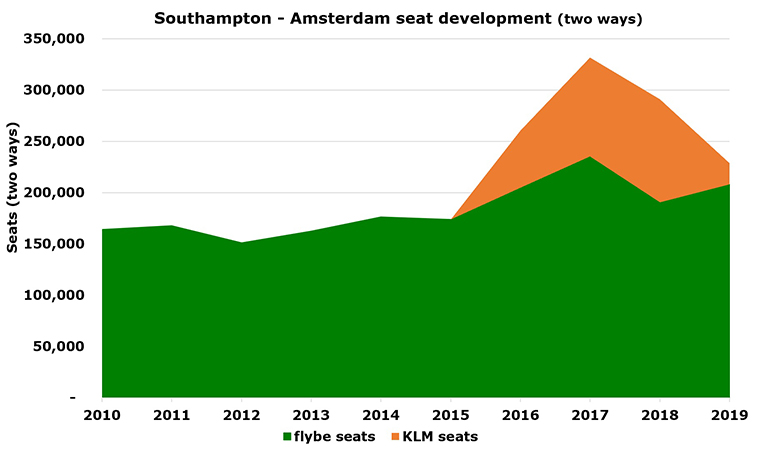 It is noteworthy that the SLF in 2017 was just 69% – the lowest since 2013. It seems flybe was primarily responsible for this low result.

In 2017, KLM almost doubled seats while flybe’s volume grew too, pushing airport-pair capacity up by 71,000 YOY.

Clearly, it would be expected that average fares would suffer and that SLF would rise accordingly. But SLF fell as passenger volume ‘only’ grew 22% against 27% for seats.

To help to counteract this, flybe cut seats sharper than it had added them, with SLF rising to 80%.

Yet, this airport-pair has often had low SLFs: pre-KLM, flybe averaged just 64% between 2010 and 2017. What we do not know, of course, is average fares, and how the financial performance would have changed had frequencies been reduced to increase SLFs. 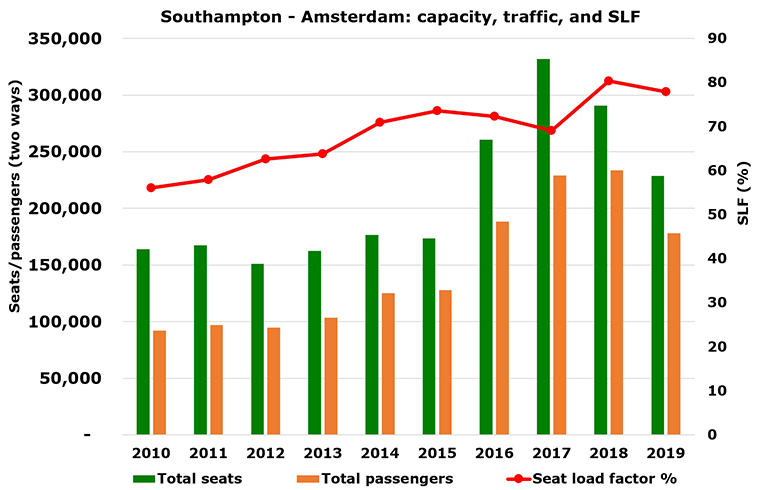 At its peak, KLM had up to 12 weekly services to Southampton, although once-daily was common at times.

In late 2018, its schedule was as follows, with this primarily designed for very strong connectivity over Amsterdam but also enabling day trips to Southampton.

… will be the same times this time, but evening only for now

Interestingly, the timings of KLM’s relaunched service will effectively mirror its previous service: arriving into Southampton at 1645 and arriving back into Schiphol at 1935.

It is inevitable – and likely very sensible – that KLM will at some point add a second-daily service for strong point-to-point demand and connections. And very likely an early morning service, as before.

An estimated 54,700 were point-to-point, while 34,400 connected over Amsterdam, with core markets being Brussels, Geneva, Hannover, Frankfurt, and Hamburg.

Indeed, previous research by anna.aero shows that most Germany is the top country for KLM passengers to/from the UK.

KLM’s timings for its once-daily service may appear odd, but it is all about connectivity over Amsterdam – with its 1635 departure from Schiphol and 1935 arrival back corresponding with core arrival and departure banks.

In fact, based on October 2020 OAG data, KLM’s Southampton timings will enable two-way connectivity to 44 destinations, albeit all within Europe due to its once-daily frequency. 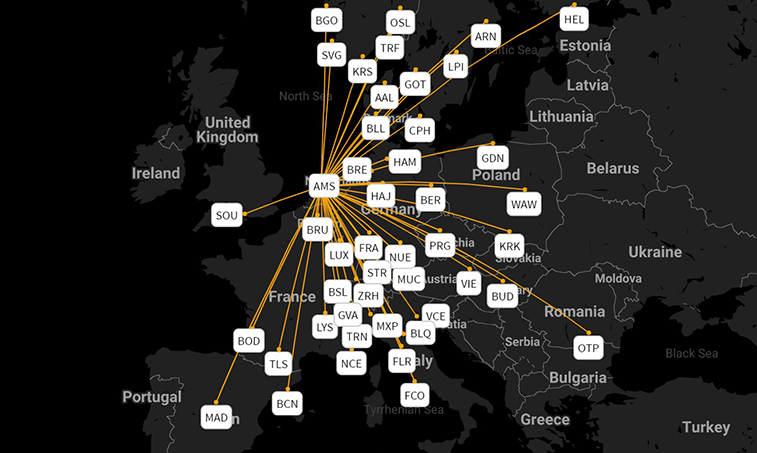