Budapest Airport has today witnessed the resumption of its first long-haul service since many parts of the world came to a standstill during the coronavirus pandemic. With travel restrictions between Hungary and Korea being lifted, LOT Polish Airlines’ weekly operation to Seoul Incheon has returned to once again meet the considerable demand for the crucial link between Budapest and the East.

As the market between the Hungarian gateway and South Korea’s largest airport reached almost 100,000 passengers in 2019 – recording 100% growth since 2016 – the flag carrier’s service plays an important role in the return of the economic ties between the two countries. Increasing the city-pair’s air traffic volume by 50% last winter, LOT’s operation will be a keyplayer in the regrowth of the considerable inward investment from Korea into Hungary.

“When we launched LOT’s essential link between Budapest and Seoul last September, we created a success story. Today not only marks the return of long-haul services at Budapest, but also the return of confidence in our airport and air travel,” explains Balázs Bogáts, Head of Airline Development, Budapest Airport. “Attracting a balanced mix of business, leisure and VFR passengers, LOT experienced high load factors throughout the last winter period. As future demand already indicates the need to increase capacity, we’re in no doubt that the route will accomplish the same great results going forward.”

This year, as for all airports, the global COVID-19 pandemic has significantly impacted Budapest but, as the gateway begins to rebuild its passenger traffic, the reinstatement of significant routes such at LOT’s link to Seoul is a crucial development in overcoming the downturn. 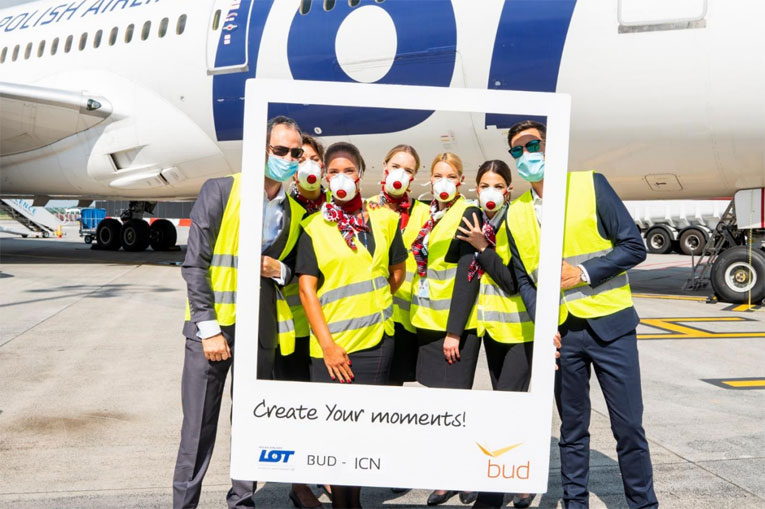 “Today marks the return of long-haul…and confidence in our airport and air travel,” said Balázs Bogáts, Head of Airline Development, Budapest Airport (left) at the celebration of the resumption LOT’s link to Seoul Incheon.