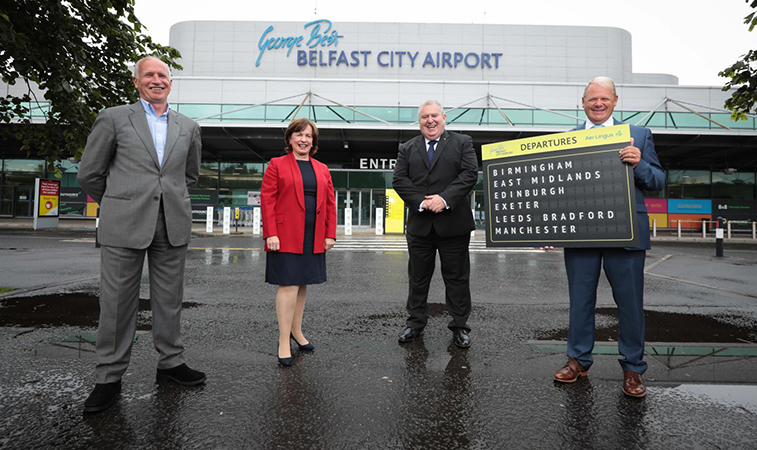 Aer Lingus Regional will base five 72-seat ATR-72-600s at Belfast City to operate these new routes to the UK mainland.

The carrier will base five 72-seat Stobart Air ATR-72-600s at the Northern Irish airport for this.

All six of Aer Lingus Regional’s new routes were previously served by flybe and they accounted for almost 42% of Belfast City’s total passengers last year.

With this announcement – and new routes by BA CityFlyer to London City, Eastern Airways to Southampton, and Loganair to Glasgow – all of flybe’s core routes from the Northern Irish airport will once again be operated.

Birmingham, Edinburgh, and Manchester – the largest volume markets from Belfast City, other than London Heathrow – will all have indirect competition with easyJet at Belfast International.

Interestingly, all of easyJet’s weekly frequencies from Belfast International are higher than Aer Lingus Regional’s from Belfast City.

Come November, easyJet will have up to seven daily services to Manchester and six to Birmingham.

This raises a dilemma. Which proposition is more compelling? A further-out airport – from the city centre – but with more frequencies and likely lower average fares, or the reverse? 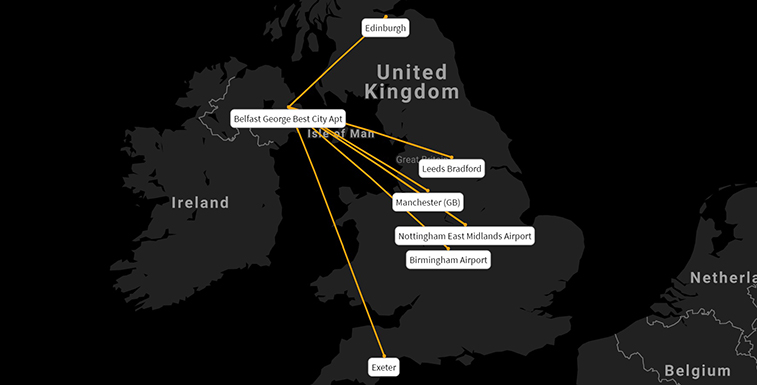 … but total weekly frequencies down significantly over flybe’s time…

Across these six routes, Aer Lingus Regional will collectively offer 82 weekly frequencies based on the weeks each route begins.  This is less than half of the 166 weekly frequencies that flybe operated in the same weeks last year.

In this winter week, Aer Lingus Regional’s total offering will climb to 98 frequencies, down by 37% over the 155 flybe offered in the year-ago week.

The two largest markets – Manchester and Birmingham – have the biggest absolute falls, down 24 weekly and 15 weekly respectively. On a percentage basis, though, Leeds Bradford’s offering is down by more than one-third and Edinburgh’s by one-quarter.

In this November week last year, flybe operated up to seven daily services to both Birmingham and Manchester.

In comparison, Aer Lingus Regional will offer up to four-daily to both cities using lower-capacity aircraft.  Yet, the Irish carrier will have a good spread of timings that enable day trips in both directions. 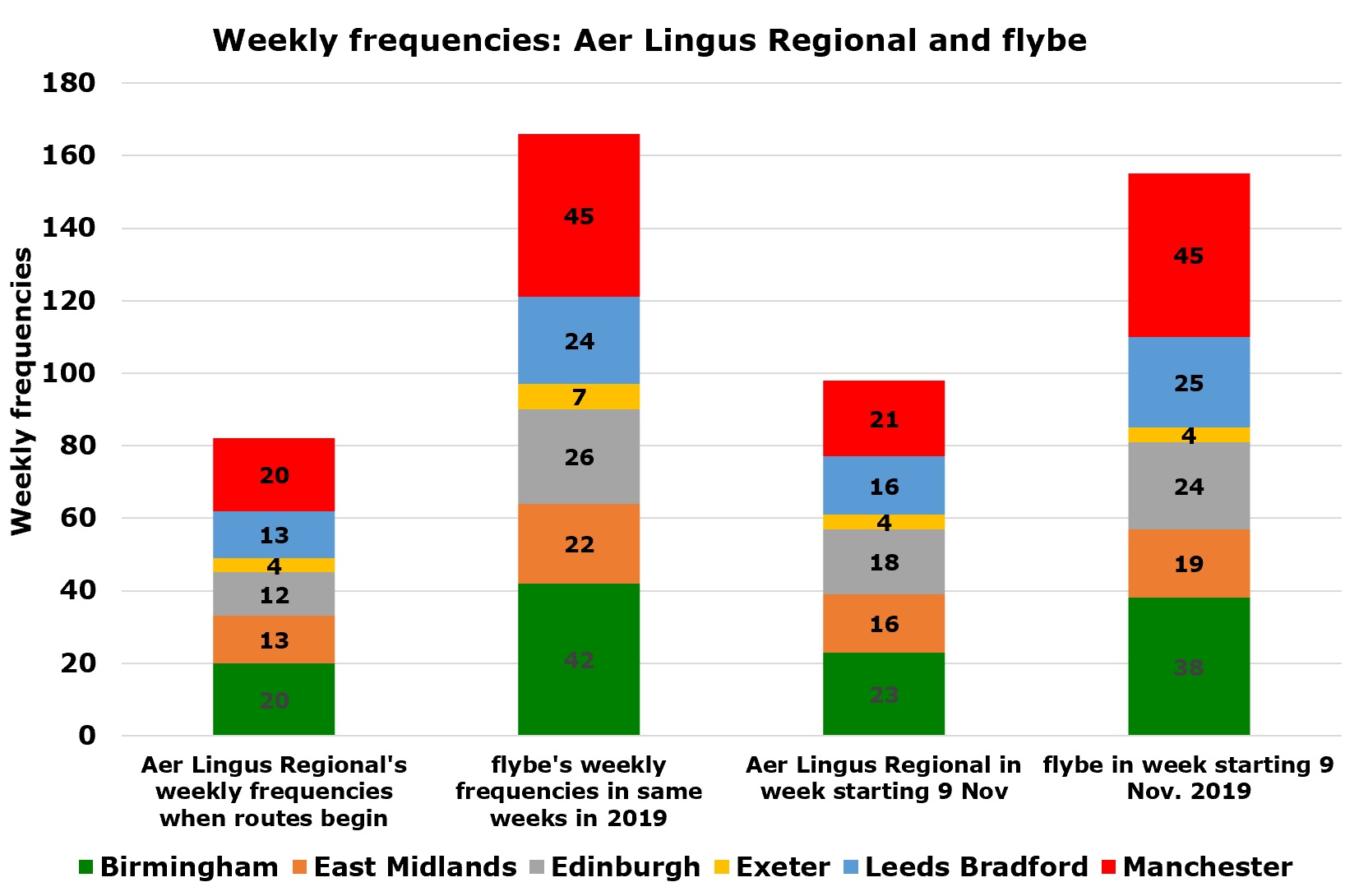 … potentially pushing up SLFs, together with lower-cost aircraft

Without too many seats to fill, it is hoped that Aer Lingus Regional can have stronger control of pricing – together with cheaper-to-operate ATR-72s on these short sectors versus Dash-8-400s – while helping to increase seat load factors.

These six routes had an average seat load factor of 78% last year, based on UK CAA and OAG Schedules data.  With 80%, Birmingham had the highest; with 75%, Edinburgh had the lowest.

Of course, fares and costs would need to be considered for a proper look at performance. 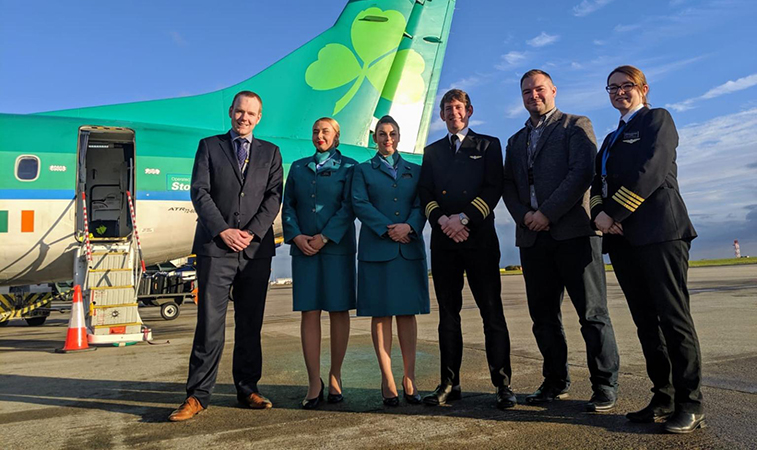 flybe carried just over one million passengers on these six routes last year, UK CAA data shows, with Manchester (276,000) and Birmingham (270,000) accounting for over half.

Passenger volume across these routes barely changed since 2014, at more or less one million, reflecting little change on an individual route basis.

This was because of fewer flybe frequencies, partly the result of strong capacity growth to Manchester from Belfast International.

Seats from Belfast International to Manchester grew by over 339,000 between 2014 and 2019 following Ryanair’s entry in 2018 – and easyJet’s growth in response.   The Irish ULCC has since reduced frequency from twice-daily to just twice-weekly. 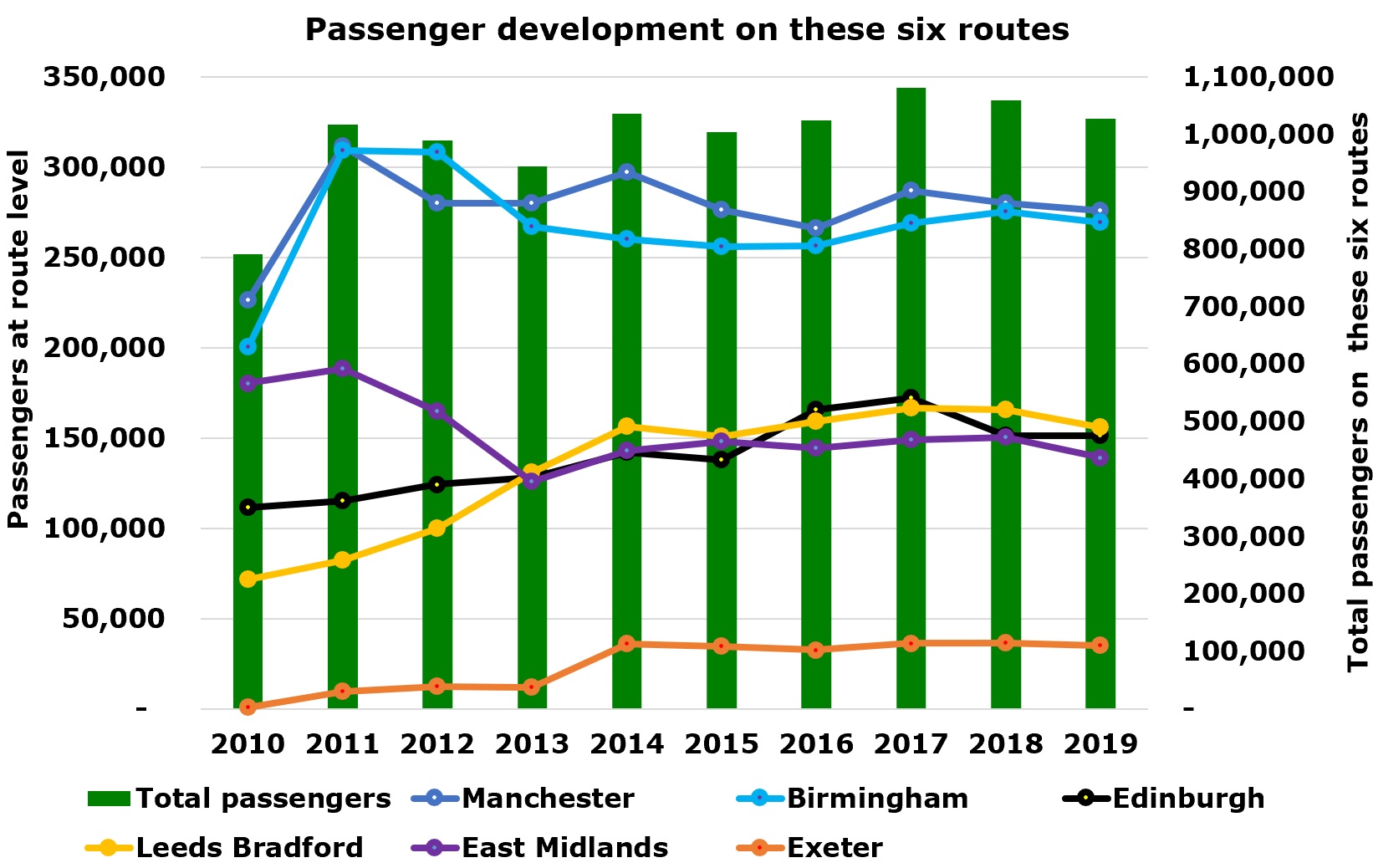