Over 7.5 million flew indirectly from across Turkey to Europe last year, for PDEW of over 10,000.

This is despite strong growth in point-to-point routes between them.

A good amount of these 7.5 million were tourist-driven, but also ethnic and VFR, the latter especially to Germany, Switzerland, Austria, France, Netherlands, Belgium, Scandinavia, and the UK.

These countries have over seven million Turks, especially Germany.  A lot of these come from Central and Eastern Turkey.

Of course, these 7.5+ million mainly travelled with Turkish Airlines and Pegasus via Istanbul Airport and Istanbul Sabiha Gökçen. 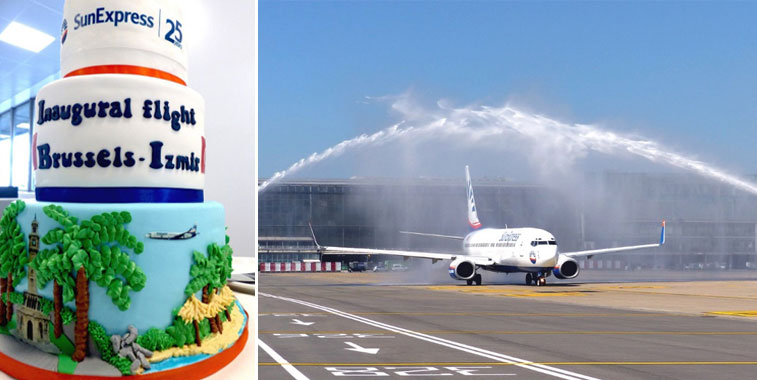 SunExpress is a core operator of thin, point-to-point routes from Turkey to Europe. If you were in any doubt as to what to expect in Izmir when your SunExpress flight from Brussels lands, this fantastic route launch cake will clear up any issues you may have. The service operates twice-weekly.

The last category, “Excl. both Istanbul airports, Antalya, Bodrum, Dalaman, and Izmir,” is effectively only VFR and ethnic-driven markets.

While far smaller in absolute seat volume, totalling just under seven milliion seats last year, they – like the others – have exploded with new point-to-point routes.

Growing non-stops from Turkey to Europe and the Middle East

In the past couple of years, well over 100 new routes – excluding Istanbul – to Europe and the Middle East were launched by Turkish carriers alone.

SunExpress, primarily a point-to-point operator, is actively targeting this market, with most routes obviously thin with low frequencies.

Example SunExpress routes (Turkish AOC) in the past couple of years include the following:

Corendon Airlines has also focused on them, with multiple new routes including:

Turkish Airlines has begun numerous routes away from Istanbul, including a daily Antalya – London Gatwick service that started in March 2019.

Despite the above, still over 250 unserved markets with average 11,000 passengers…

Looking at 2019 traffic data, there are over 250 unserved markets – excluding Istanbul – with an average of 11,000 indirect passengers.  This is based on a minimum of 5,000 passengers, i.e. often the market size of new routes created and then heavily stimulated by Ryanair and Wizz Air.

Crucially, this is pre-stimulation.

The 250 unserved markets involve dozens of airports across Turkey, each with multiple unserved routes.  But Adana, Ankara, Antalya, and Izmir have more.

Examples, chosen at random, include

These 250 do not include brand-new or experimental markets – as often created by Ryanair or Wizz Air – with no historic air traffic data. There could be many such routes to and from Turkey.

… together with 60+ underserved routes to Europe

There were also around 60 underserved markets, with 50%+ of total passengers flying indirectly.

In addition to the above, there is also a sizeable unserved domestic market of around one million passengers, before stimulation, across 47 routes.

Over one million indirect passengers were carried from non-Istanbul Turkey to the Middle East last year, with 40 unserved routes with an average of 11,000 passengers.