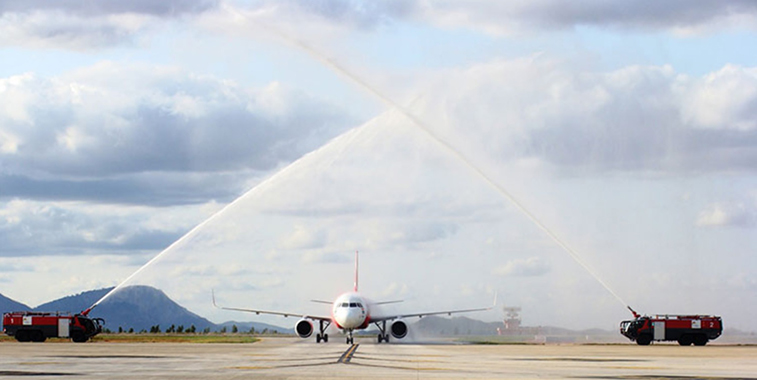 AirAsia India began in June 2014 and its initial three routes had between three and six competitors. The carrier entered the country as LCC penetration reached 64%. Now, every AirAsia India route has direct competition as uncertainty mounts over the carrier’s future.

But AirAsia India’s going has not been straightforward, with the carrier set up with the intention of operating underserved routes involving tier two and tier three airports away from major, costly, and congested metropolises.

Yet AirAsia India’s initial routes in June 2014 – Bangalore to Goa, Chennai, and Kochi – had five, six, and three competitors respectively.

By the time the carrier began, LCCs had already captured 64% of the country’s domestic market, based on OAG Schedules data, with most modelling themselves on AirAsia, meaning it was bringing relatively little to the table.

AirAsia India was as far from a first-mover – as the Group’s units try to achieve – as could be imagined.

Now, both AirAsia Group and Tata are reportedly trying to sell their share in the carrier, with the airline Group describing it – and its Japan sister – as peripheral to the Group’s core focus. 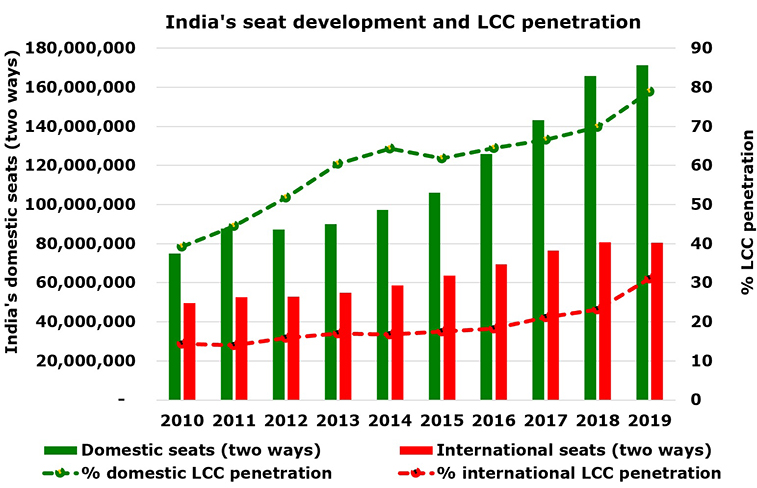 AirAsia India: the lowest seat volume and grew the least too…

AirAsia India had just over 10.5 million seats last year, all deployed domestically, up by a CAGR of 67% since its 2014 launch.

The carrier added 2.2 million more seats last year, up 27% YOY.  It introduced multiple new routes from Delhi, together with the likes of Mumbai to Chennai, Hyderabad, and Kolkata – indicating the airline’s network shift.

AirAsia India’s growth overshadowed by the absolute increase in seats of all other LCCs, with IndiGo adding 28 million YOY, SpiceJet seven million, and Go Air 3.6 million. (IndiGo’s tumultuous performance since 2016 was from grounding aircraft.)

Only Go Air grew shallower on a percentage basis (+24%).

While now uncertain following its potential selloff, AirAsia India has repeatedly said it wishes to significantly speed up is growth while actively pursuing international operations for which it is now eligible. 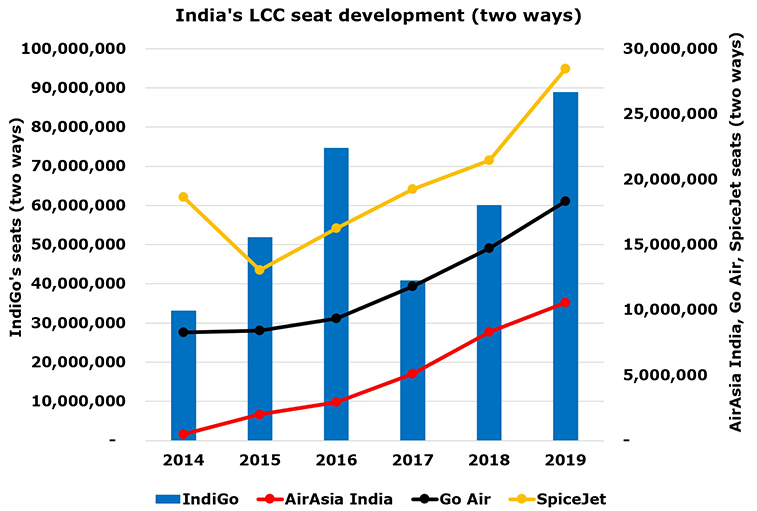 … as its network focus changes dramatically

While Bangalore has always been its mainstay, Delhi (introduced in 2015) and Kolkata (2017) have grown very strongly, reflecting the carrier’s evolution into more tier-one metros – aided by Jet Airways’ end in 2019, especially at Delhi. 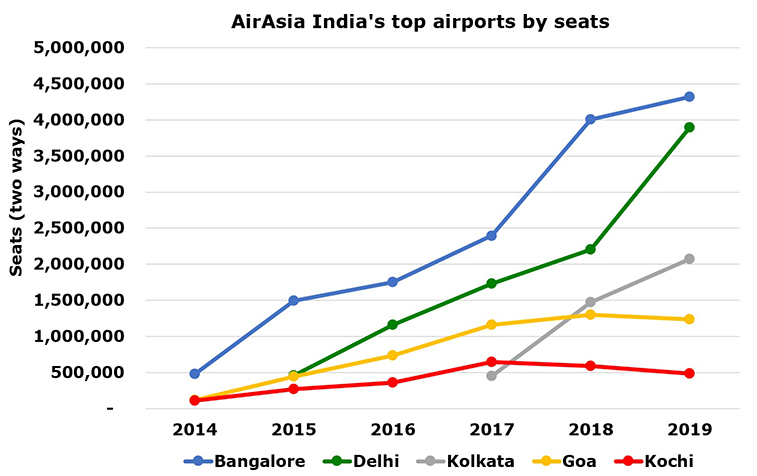 Its Delhi capacity almost doubled to four million seats last year, although it still only has a 6.4% share of seats at India’s capital airport – almost half that possessed by Go Air. However, Delhi is very likely to become AirAsia India’s number-one airport in due course.

Despite only starting in April 2019, Delhi – Mumbai is already the carrier’s top route from the Indian capital by seats, followed by Bangalore, Guwahati, Goa, and Srinagar. And Delhi – Mumbai is the operator’s second-largest route system-wide this year, behind only Bangalore – Hyderabad.

Not surprisingly, AirAsia India often has a small presence on its served routes, especially in major markets.  And competition will only increase as it increasingly and aggressively focuses on such airports and markets.

This is something the LCC is addressing, with it recently commenting that “There is no point staying a marginal airline… [Our] focus will be on strengthening our position on routes that we are on.” 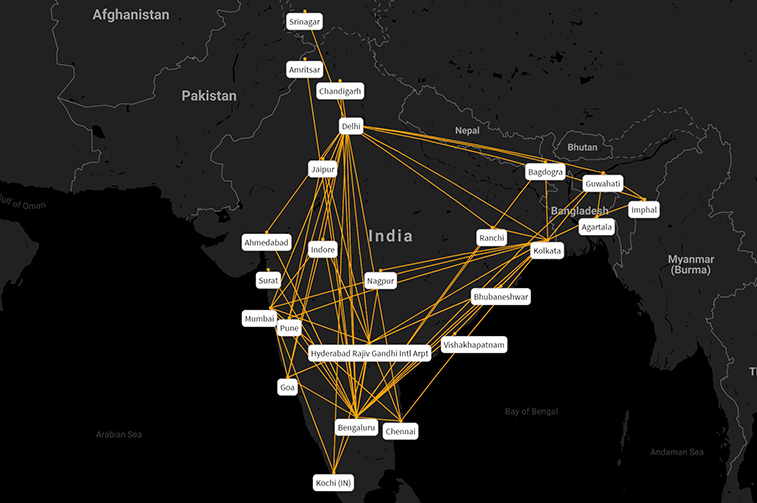 Competition on every route

From AirAsia India’s first year, every route has had direct competition, typically from multiple airlines including other LCCs.

This has not let up.

All 63 of its routes had direct competition last year, with the mean number of competitors totalling four.  IndiGo was on every single one, Air India on 41, Go Air on 39, and SpiceJet on 37.

No matter the relative size of the market, competition is there.  Of course, what varies is the nature and intensity of that competition.  Clearly, the presence of direct competition does not necessarily mean a market is not underserved.

AirAsia India has pockets of relative dominance.  It is, for example, the leading operator by seats on Jaipur – Pune and Goa – Indore, data by OAG shows. 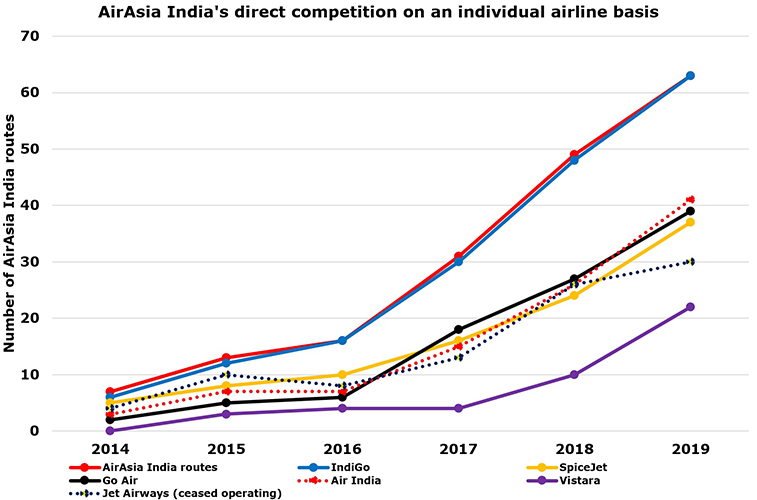