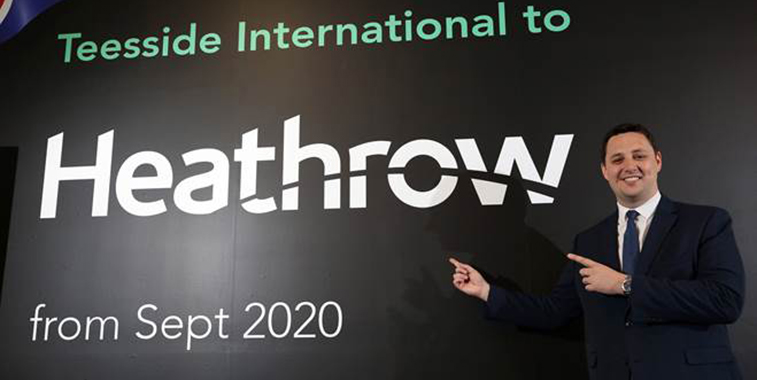 Tees Valley Mayor Ben Houchen at Teesside announcing Eastern Airways’ new link to Heathrow, which will depart on 14 September and build up to a once-daily offering.

Eastern Airways has today (5 August) announced that it is to reconnect Teesside with Heathrow after this route was unserved for 11 years.

Its new service will operate from 14th September on a four-weekly basis, slowing rising to once-daily.

This new route follows strong growth for the carrier from Teesside, with seven other routes – including the recently launched London City and Newquay.

In a nod to the history of the route, Eastern Airways’ Heathrow service will have the numbers T3333 and T3338, both previously used by bmi. This is nice.

No increase beyond its once-daily offering into the winter is yet known or bookable on its website. However, Roger Hage, Eastern Airways’ GM Commercial and Operations, tells anna.aero that he expects a double-daily service, at least on weekdays, subject to Heathrow slots.

In comparison, bmi, which last operated the route, had a three-daily service in its last full year of operation.

Eastern Airways’ London City service – which took off on 6 July and is operated up to twice-daily – is not yet bookable for W20. But Heathrow is. Hage insists that City will be operating this winter.

Teesside – Heathrow was served by bmi until the end of the 2009 winter season, with the carrier’s ten-year passenger development on the route shown below.

Without additional frequencies, Eastern Airways’ Heathrow schedule means that it will obviously not be targeting day trips in either direction.

Indeed, it is unclear exactly who its virtually middle-of-the-day timings will appeal to, especially given frequent trains that can be relatively quick: 2h 30m to 3h 15m each direction depending on which catchment city is looked at.

It will need strong partnerships at Heathrow – and higher frequencies – if it is to really connect Teesside to the world. 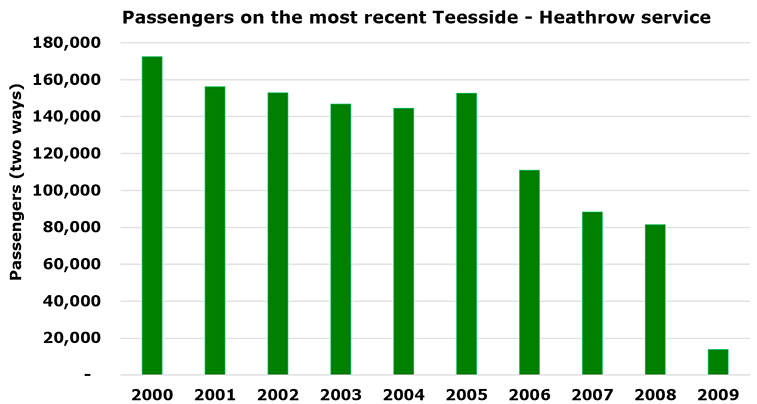 KLM normally has up to 18 weekly services between Teesside and Amsterdam, clearly primarily timed for connections over the Dutch capital, but also for Amsterdam day trips.

The airline is, of course, currently operating a reduced service, with its up to three daily services bookable in the coming months, according to its website.

KLM carried almost 119,000 passengers between Teesside and Amsterdam last year, UK CAA data shows, up by 7% YOY.  Combined with 1% fewer seats YOY, seat load factor rose to its highest for years: 75%. Of course, SLF is just one element of performance, along with unit revenue and unit cost. 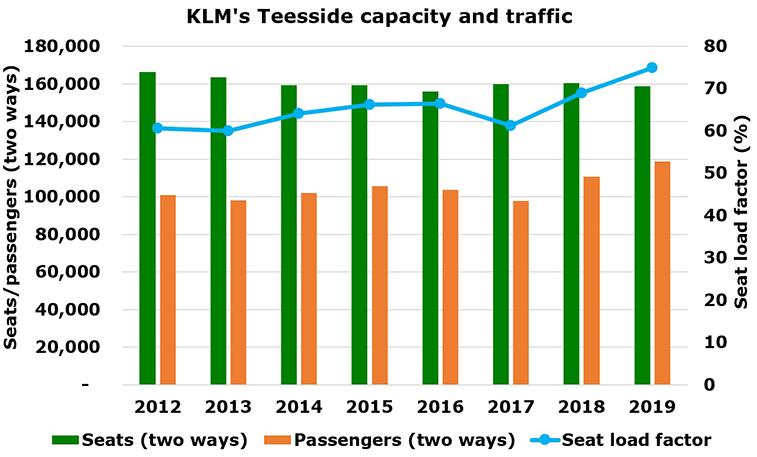 67% of KLM’s passengers connect over Amsterdam

OAG Traffic Analyser data, which tallies in number with the UK CAA, indicates that 67% of KLM’s Teesside passengers connected over Amsterdam,  equivalent to 79,500.

It is no surprise that Eastern Airways planned to operate Teesside – Alicante this summer, but it has removed it from sale as a result of the need to quarantine for 14 days on arrival back in the UK.

Surprisingly, after Alicante most KLM passengers connected via Schiphol to Heathrow, according to MIDT data. Coincidentally, this is now also to be served by Eastern Airways.