Air Dolomiti launched Verona – Düsseldorf on 31 July, with the German airport becoming a new airport for the carrier.

An estimated 7,000 travelled indirectly between the two airports last year, OAG Traffic Analyser shows, with the market unserved since airberlin ended it in 2013.

The route, which operates on Friday and Sunday using 120-seat Embraer 195s, is timed for weekend trips.

Air Dolomiti, which revolves around feeding Lufthansa at Munich and Frankfurt, will continue Verona – Düsseldorf into the upcoming W20 season.

Speaking to anna.aero, Düsseldorf’s Florian Bongard, Senior Manager Airline Marketing, said: “We are very happy to welcome Air Dolomiti in Düsseldorf, especially during these difficult times. Verona offers a good mix of business, leisure, and VFR traffic. In addition, Verona is well-connected to the Lake Garda.” 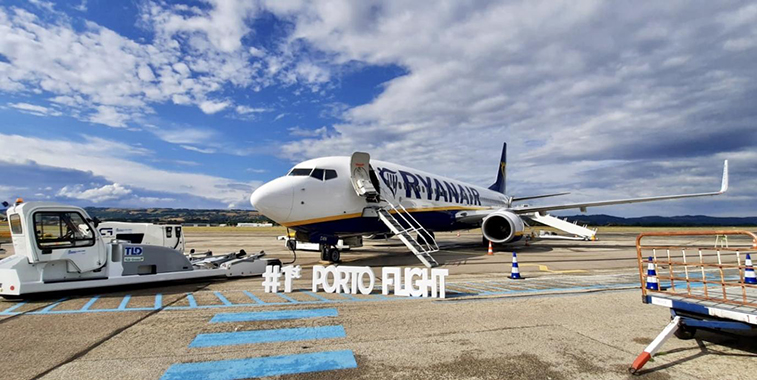 Ryanair began Porto – Grenoble on 3 August, with this route operated twice-weekly on a year-round basis.

The carrier serves 16 French airports from Porto, although only 13 are currently bookable on its website given coronavirus.

Ryanair had 951,000 two-way seats between Porto and France last year, up 5% YOY.  Portuguese diaspora mainly accounted for this demand. 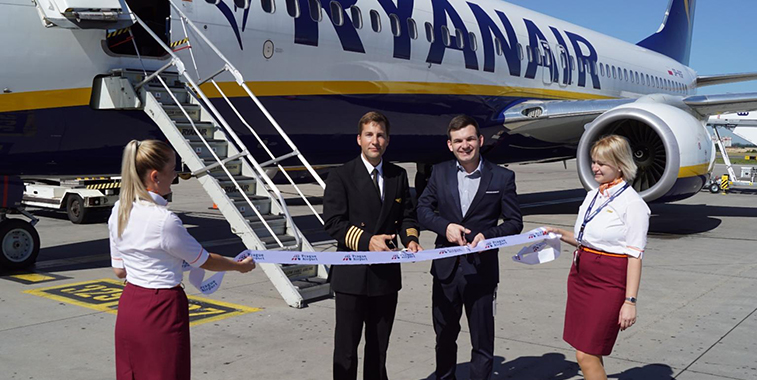 Doing the honours of celebrating the launch of Prague to both Kosice and Paphos is a Ryanair captain and Tomáš Novák, Route Development Executive at Prague Airport.

It is a double success for Ryanair at Prague, with the carrier launching Prague – Kosice on 3 August and Prague – Paphos on 1 August.

Ryanair competes directly with Czech Airlines to Kosice, but has no direct competition to Prague.

Ryanair now has 40 routes from the Czech capital, with the ULCC’s seats at the airport growing strongly. It ended last year with almost 2.5 million, up 44% YOY. 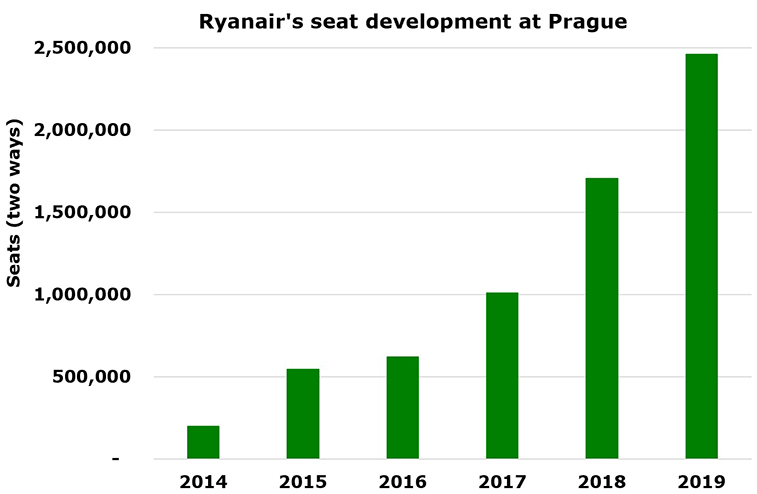 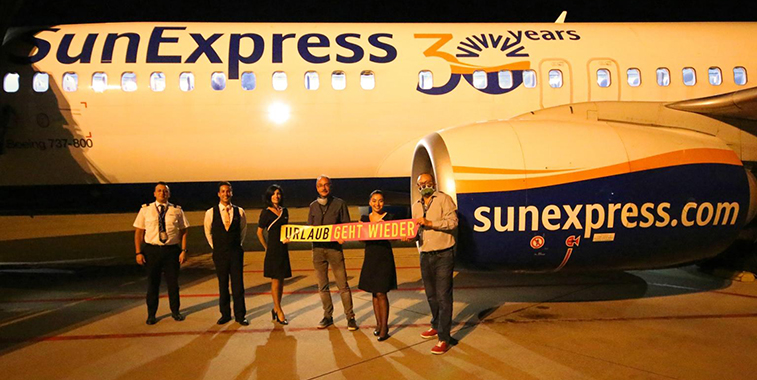 Despite the hour, Mathias Richter, Münster Osnabrück’s Manager of Aviation Marketing, right, shows his keeness to celebrate the relaunch of SunExpress from the airport.

SunExpress, a core operator between non-Istanbul Turkey and Europe, has restarted Münster Osnabrück.

The carrier had suspended Münster Osnabrück given coronavirus, and its relaunch is despite the on-going travel ban to Turkey.

SunExpress, which has served Münster Osnabrück for 30 years, now serves Antalya twice-weekly this month, rising – depending on the full lifting of the travel ban – to once-daily from September until the end of S20.

Turkey is crucially important to Münster Osnabrück, both for tourism and VFR.

Six Turkish destinations are served from the German airport – Antalya, Adana, Bodrum, Izmir, Kayseri, and Zonguldak – across SunExpress and Corendon Airlines, with Turkey accounting for 23% of the airport’s passengers last year. 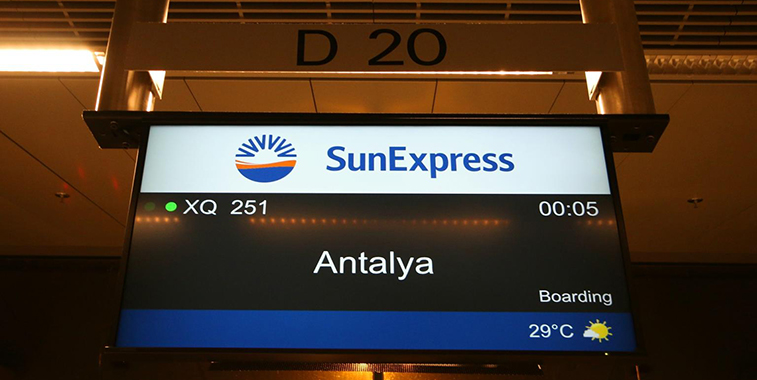 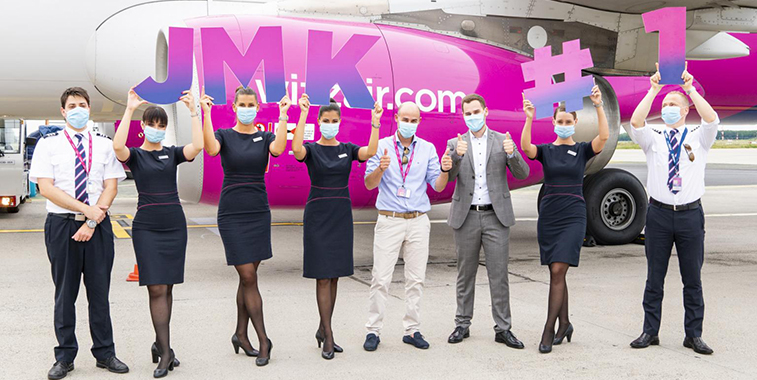 All eight of Wizz Air’s Greek airports are now linked with Budapest.

The new service, which has no direct competition, will operate twice-weekly until 24 October.

Mykonos, new to Wizz Air’s network this summer, now has seven routes by the carrier.  In all, and despite coronavirus, Wizz Air has 737,000 seats to/from Greece this year, up 13% YOY. 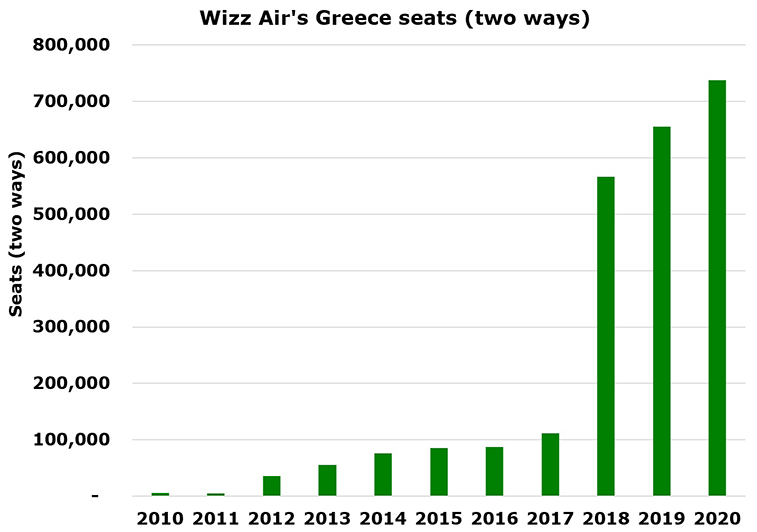