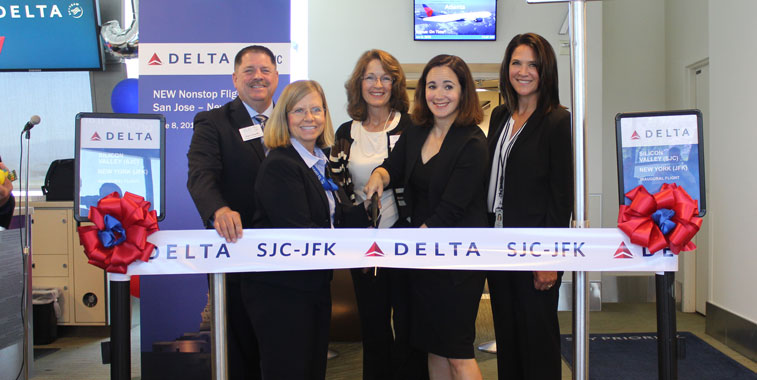 Delta began San Jose – New York JFK in 2018, along with Alaska, with the pair joining long-standing operator JetBlue.  This entry saw seats more than triple in number to 331,000. This competition saw Alaska end JFK in favour of Newark for NYC.

San Jose, California, was the seventh fast-growing US airport between 2010 and 2019, recording an 80% increase in seats.

It was the fastest-growing California airport by percentage growth in this period.

San Jose added nine million more seats in 2019 against the start of the decade, making the airport the state’s fourth-fastest-growing by added seats, behind bigger Los Angeles, San Francisco, and San Diego.

This pushed the airport to the 34th spot in the country.

Interestingly, San Jose’s percentage growth was almost the fastest of all the top-20 airports by absolute added seats, behind only Austin and Dallas Love and just ahead of Nashville.

But this tells only part of the story.

Most of San Jose’s growth came from 2015, since which the airport’s seat capacity grew by 63% with 7.9 million additional seats. This is phenomenal growth: up by a CAGR of more than 10% in five years. 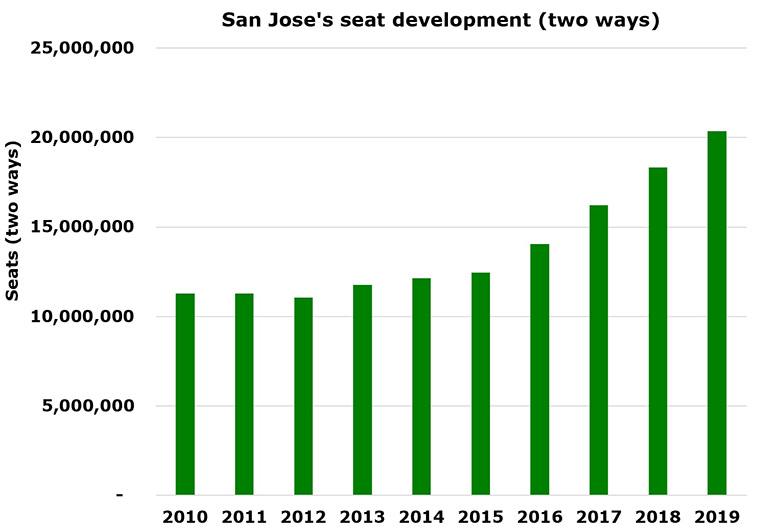 Southwest is by far San Jose’s top airline, with 53% of the airport’s seats last year.  It was followed by Alaska Airlines, with a market share of 18%.

Southwest, Alaska, and Delta accounted for over eight in ten of San Jose’s seats last year.

Southwest’s route network has grown from 13 destinations in 2015 to 31 in the current year.  The carrier’s most significant route additions in recent times are no doubt Honolulu, Kahului, Kona, Lihue, together with El Paso, Long Beach, and Nashville.

OAG’s Traffic Analyser, using MIDT booking data, suggests that Southwest carried 77,000 on Honolulu -San Jose (round trip) last year, for an estimated seat load factor of 91%. This is well above the carrier’s average SLF, although it doesn’t consider fares.

Around 64% of Honolulu – San Jose were local passengers, while the rest connected over San Jose, especially to Las Vegas, San Diego, Los Angeles, and Portland.

Despite the addition of Long Beach in 2019, replacing JetBlue, Southwest’s LA-area airports – numbering five – have necessarily reduced in dominance from 44% of its San Jose seats to 36%. 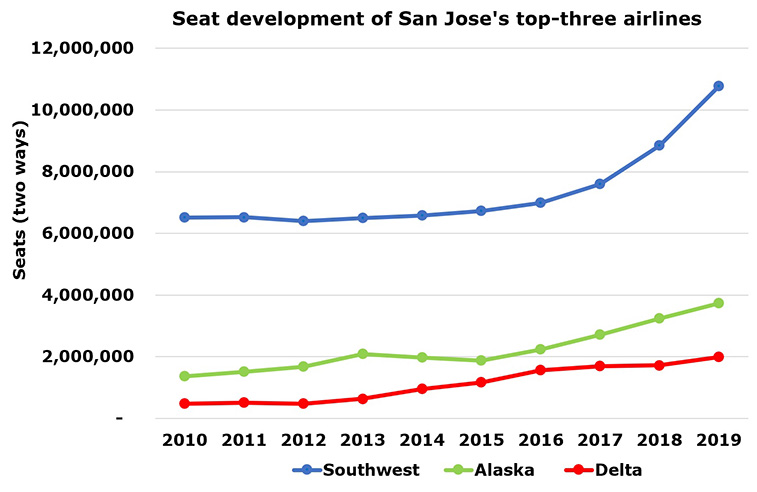 … including from multiple new airlines, but some haven’t lasted

However, Aeromexico, Air China, and Lufthansa have ceased serving the airport.

San Jose also regained Frontier (2017) after the carrier ended it in 2010.  It now serves Denver, Las Vegas, and Phoenix from the airport, having launched multiple and ultimately short-lived destinations in 2018, including Atlanta, Austin, Cincinnati, San Antonio, and Tulsa.

San Jose’s top-10 destinations had over 13 million seats last year, so they represented almost two-quarters of the facility’s total.

These 10 saw almost 4.1 million seats added since 2015; in other words, they were responsible for over half of San Jose’s total seat increase in this period.

This is despite the airport’s route network growing from 33 destinations in 2015 to 54 last year.

San Diego (+93%), Burbank (+80%), and Salt Lake City (+69%) performed especially strongly.  San Diego was by far number-one by added seats though, with just under 900,000 – the result of Alaska entering and growing strongly, and Southwest responding in kind. 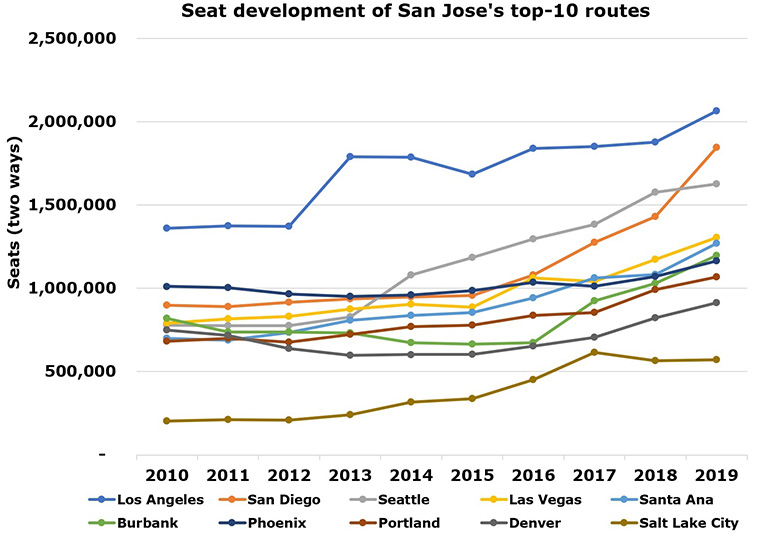