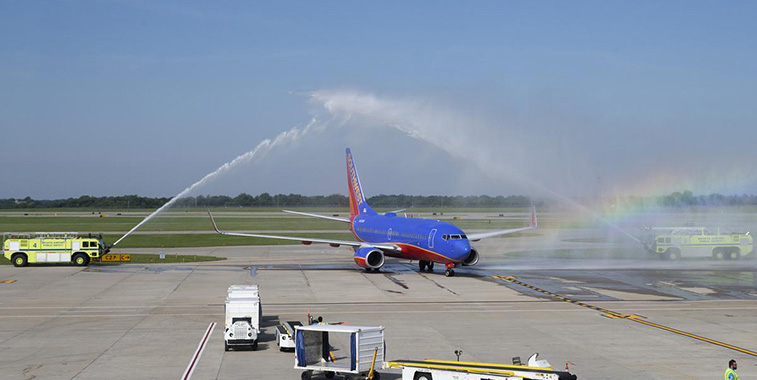 Southwest has announced that it will begin a six-weekly non-stop service from Norfolk to San Diego. This will, of course, especially appeal to the US Navy and related.

Taking off on 5 January, the 3,750-kilometre service will operate year-round. It will be Southwest’s 13th-longest route, just behind Oakland – Kahului and just ahead of Baltimore – Los Angeles.

This route is driven by the following, based on DOT and OAG Traffic data:

This route means that Norfolk will once again have a non-stop route to the West Coast, with Denver currently the furthest served.

Western US service has been sporadic from Norfolk. Southwest served Las Vegas with up to a daily summer-seasonal operation that ended in 2012. Most recently, Frontier served Las Vegas and Phoenix (2018 and 2019), both on a twice-weekly basis using A320s. 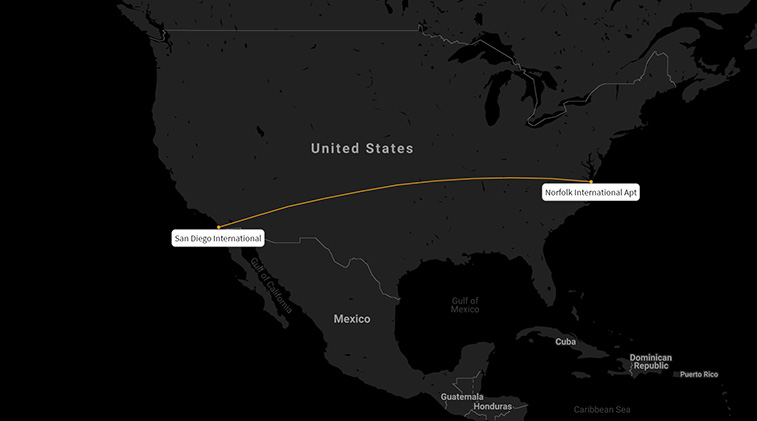 Around 138,000 passengers flew between Norfolk and San Diego last year, data from OAG Traffic Analyser indicates. This corresponds with that from the Consumer Airfare Report.

As such, Norfolk – San Diego is within the top-five largest unserved markets within the US.

It is also the largest unserved destination from Norfolk and the second-largest from San Diego, after the much sought-after Washington Reagan.  (Jacksonville, another Navy-driven route like Norfolk, is also heavily demanded from San Diego but unserved.)

Allowing for seasonality, this equates to an average year-round PDEW of 192, with Q3 achieving a 42% higher PDEW than Q1. 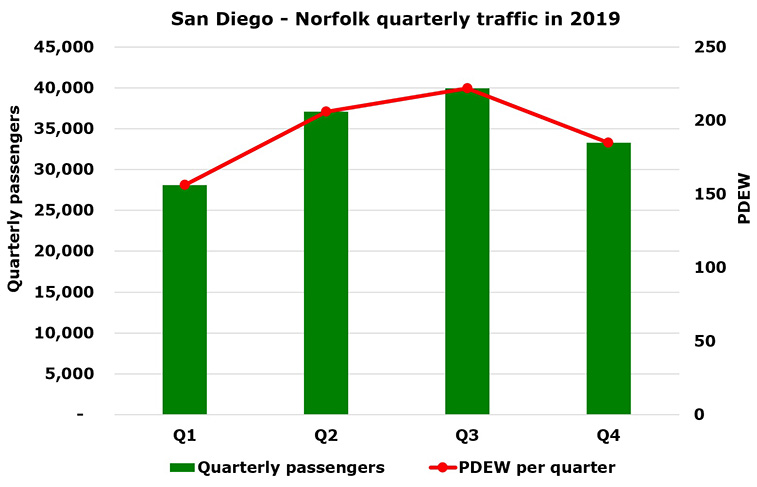 The overwhelming majority of Norfolk – San Diego passengers flew indirectly last year.  About four in ten travelled via Atlanta, followed by 10% over Charlotte and 7% via Detroit.

On a typical day pre-coronavirus, OAG Connections Analyser shows that Delta offered seven connecting opportunities via Atlanta, based on up to three hours at the Georgia hub.

Delta was by far the leading operator between Norfolk and San Diego with a 51% share, with American second-placed with 19%.

Between 2010 and 2019, it added over 9.5 million seats, making the Southern California airport the US’ 18th fastest-growing facility in this period.

Southwest is by far San Diego’s top airline, with a 40% share of capacity from providing over 12.4 million seats there last year.  This was around eight million more than the number-two operator, Alaska Airlines.

However, it is notable that the LCC’s share of capacity has broadly remained unchanged, with its growth at San Diego mainly from 2015. In 2015, Southwest had 26 non-stop routes, rising to 36 last year. Omaha was added last year (along with the temporary Norfolk), and Honolulu this current year. 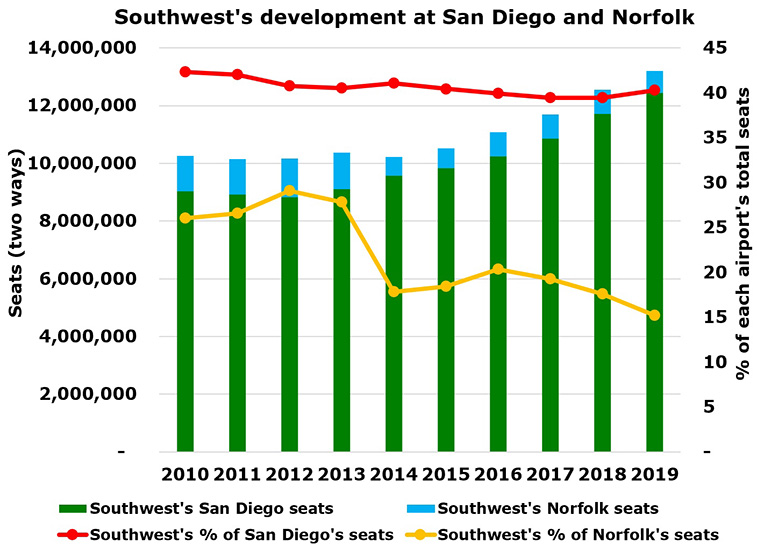 … but Southwest is far less dominant at Norfolk

Southwest’s performance at Norfolk has been very different, with its seat capacity there amounting to just 15% last year across six routes. This meant it was the airport’s fourth-largest carrier, with Delta top.

Southwest’s 15% share at Norfolk was nearly half that of a few years previously, which was the result of its seats nearly halving between 2013 and 2014.

However, the LCC relaunched Nashville last year, together with the trial to San Diego. St Louis was added in the current year, although it appears to have been short-lived.