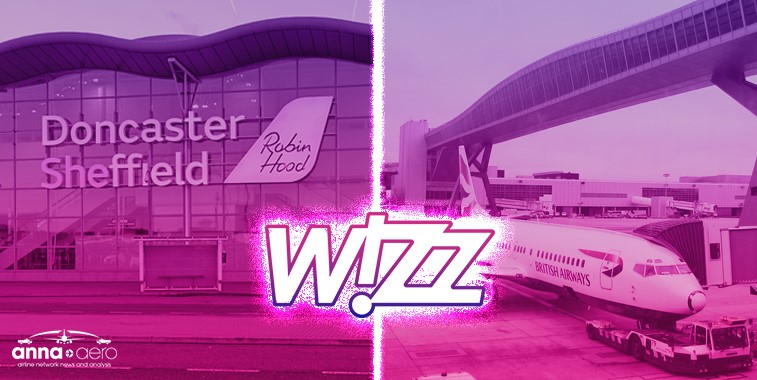 Wizz Air has revealed a further 19 routes, all starting from this October.

Of these 19, seven are from Doncaster Sheffield, seven from Riga (taking the fight to airBaltic), four from London Gatwick, and one from Tallinn (using Riga-based aircraft and operating a W).

Doncaster and Gatwick become the carrier’s second and third UK bases, after Luton – the carrier’s largest airport by total seats.

Wizz Air will base one aircraft at both Doncaster and Gatwick and an additional A320 at Riga.

It is hoped that the ULCC will in time base more aircraft at Doncaster and Gatwick given the economic problems of one-aircraft bases.  This is probably inevitable at Gatwick, with the carrier securing 196 slots at the airport this winter. Expect more Western European routes.

Two of these 19 routes have had no service in the past decade: Riga – Birmingham and Tallinn – Bergen.

Four routes were previously served by Wizz Air (see below the table), while the remaining 13 have had – or still have – service by others.

It is notable that Riga – Stockholm (area) will now have four airlines. Riga – Skavsta was previously operated by Ryanair until 2014.  At its peak, it had over 151,000 seats across up to nine weekly services. During this period, Riga –  Stockholm Arlanda was, understandably, far lower in capacity than it is now.

Four routes are relaunched; Doncaster – Kosice had a 98% SLF

Four of these 19 routes are being restarted by Wizz Air: Doncaster to Kosice and Lublin, and Riga to Bergen and Keflavik.

Bergen and Keflavik were served by Wizz Air until earlier in this current year.

The relaunch of Doncaster means that the Yorkshire airport will have the only non-stop service from northern England to Lublin and Kosice.

Kosice, for example, was operated between 2015 and 2018, and it had up to three weekly services, OAG Schedules data shows.

At its peak in 2017, Kosice had 46,440 seats, meaning it had a 98% seat load factor when related to UK CAA passenger data.  This says nothing of sector revenue given how ‘yield passive, load factor active’ Wizz Air is. 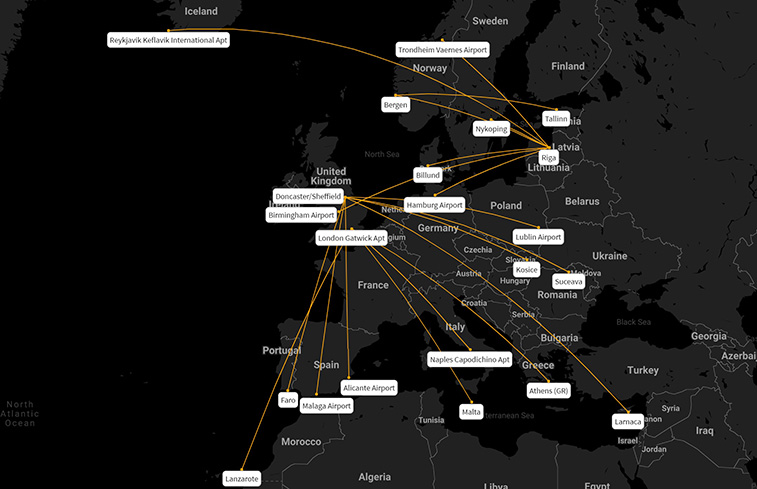 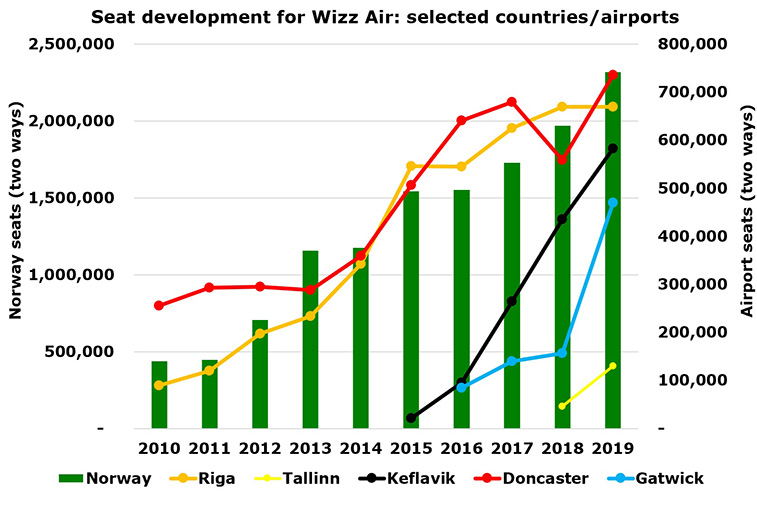 Doncaster’s YOY growth was from new routes to Krakow and Timisoara last year (Timisoara has since ended), together with full-year service to both Budapest and Debrecen, both introduced in late 2018. Wizz Air now has 17 routes from Doncaster.

Wizz Air began Gatwick in 2016.  It applied for 200 slots a couple of years ago and had zero allocated, partly because there were no early morning availability, clearly demonstrating its determination to grow at the airport.  Coronavirus has enabled its Gatwick expansion beyond late evening departures using non-based aircraft.

Wizz Air added Gatwick to Budapest, Cluj-Napoca, and Gdansk last year (Cluj has since ended), with Krakow and Sofia added this present year.  The ULCC now has nine routes from Gatwick.

Its (initial) one-aircraft base at Gatwick shows a lot of downtime in-between its AM and PM operations, the result of slot issues.

Wizz Air was the third-largest airline from Norway to Europe last year, on an international route basis, behind SAS and Norwegian.  Its seats to/from the country increased by 18% YOY.

All of its new and restarting Norway routes in this announcement are to/from Riga and Tallinn.

Riga’s top remaining unserved routes are Stavanger and Alesund, at nearly 14,000 and 11,000 respectively – before stimulation.  Riga – Bergen and Tallinn – Bergen, both starting this October, had 13,500 and 10,000 indirect passengers last year respectively.

Stavanger and Alesund are already in Wizz Air’s network, although the carrier operated Riga – Stavanger between 2015 and 2016.  Has enough changed to warrant serving it again?

Tallinn, which joined Wizz Air’s network in 2018, has grown well for the carrier, with seven routes.  It added Kharkiv, Lviv, Milan Malpensa, and Vienna this year.

Tallinn has around 20 unserved markets with 10,000+ indirect passengers last year. These include Gothenburg, Hamburg, Prague, Barcelona, Rome, Düsseldorf and wider NWW (Dortmund), Budapest, and Billund, all already in the carrier’s network. Will any materialise?