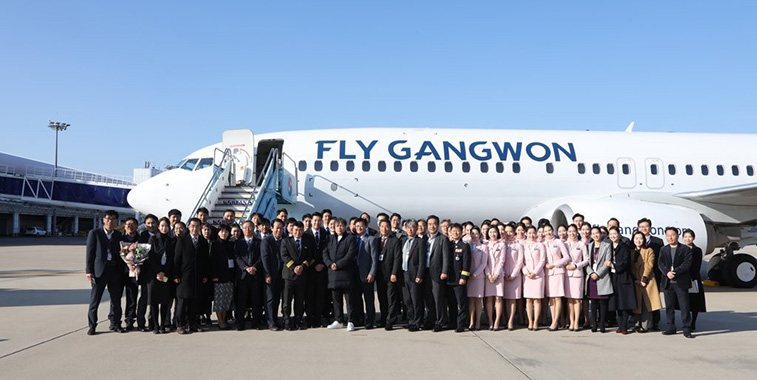 Miraculously, Jeju’s seats are now above the level seen before coronavirus.

This is up by 4% or almost 26,000 weekly seats over the pre-coronavirus period at the start of January.

Domestic demand, however, has unsurprisingly not caught up, reflected in both seat load factors and fares.

There’s one reason for this supply bounce back: Jeju’s domestic market.

The week starting 19 August is the third consecutive week that Jeju’s capacity surpassed all weekly seats in January.

Unfortunately, the recent spike in infections in South Korea may mean that tough restrictions are imposed again, therefore potentially somewhat backtracking on this development.

All about the domestic market

It is typically domestic markets that are recovering quicker than international, which is clearly the case with Jeju.

Ryanair’s head of route development suggested this about Europe too in our recent webinar.

Jeju’s domestic seats are up by 11% in the current week versus the start of January, equivalent to an additional 73,000 weekly seats.  The number of operational flights via Flightradar24 fits with this.

However, the airport’s international seats – which are primarily to China – are down by 68% the same period, a loss of 47,000 in a week.

The island resort’s international capacity is at its highest in nearly six months, but with a very long way to go.

Because of this imbalanced redevelopment, Jeju’s domestic seats now account for 97% of the airport’s total, up from around 90% at the start of the year. 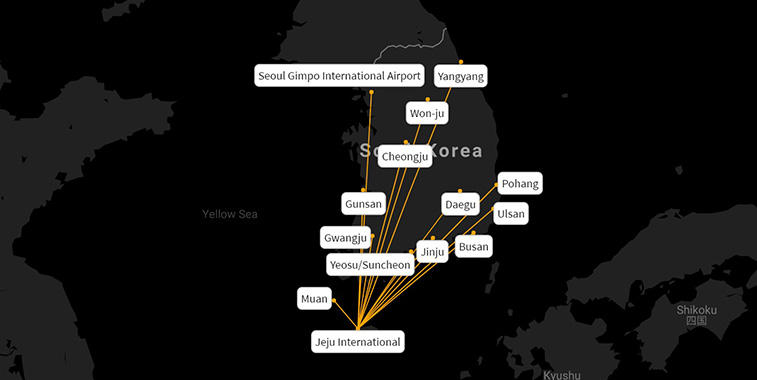 In the grand scheme of things, this is striking.

This performance is entirely due to the island’s buoyant domestic capacity, which is up by almost 7% versus the year-ago week.

International capacity, meanwhile, is down by almost 70% YOY.  Clearly, Jeju’s position would be far worse if it were far more international-focused. 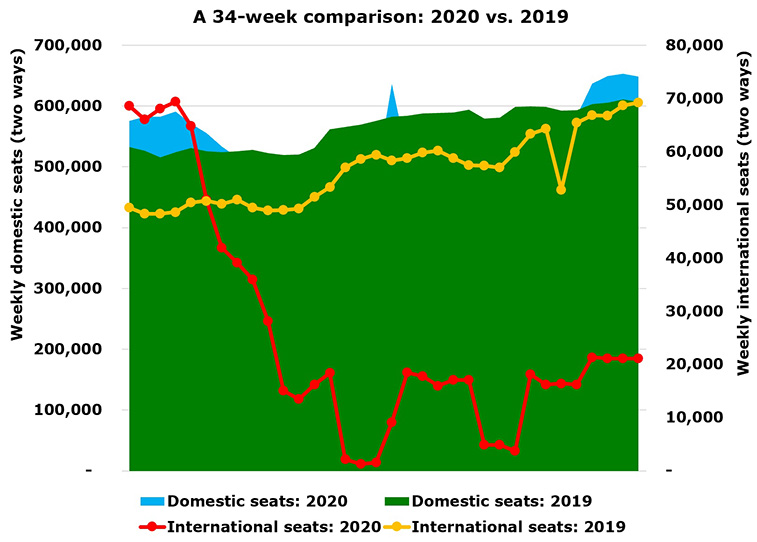 … but a slightly different picture if all 34 weeks are accumulated

While a total of 18.9 million seats were offered in this period this year, this is down by 10% or 2.2 million YOY.

On an absolute and accumulative basis, this was almost identical to that experienced by its international network. 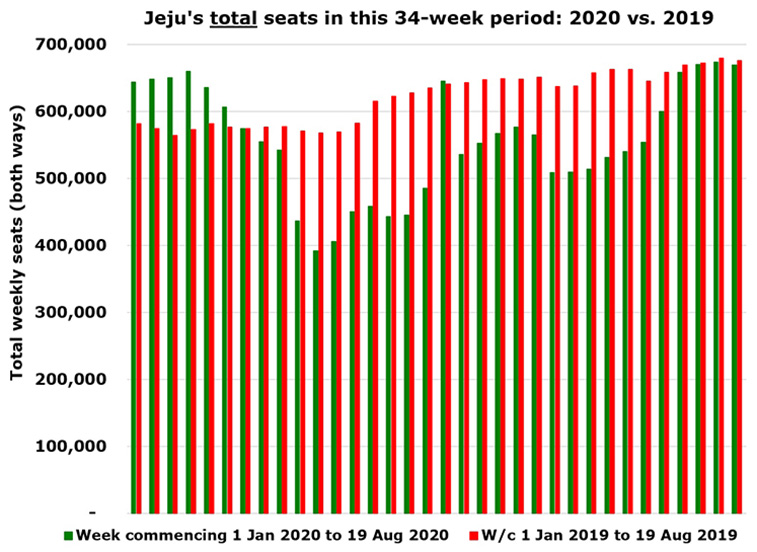 Jeju has 13 domestic routes this year.

Despite coronavirus, various new routes have been added this year, including:

Fly Gongwon’s Jeju – Yangyang, at four-daily using B737-800s, accounts for this route’s growth of nearly 500% in the 34 weeks this year, albeit from an extremely low base.

Jeju’s domestic market naturally revolves around Seoul Gimpo, with this route accounting for six in ten of the airport’s domestic seats.  It is the world’s largest domestic route by total seat capacity.

In the current week, it is served 878 times each way, for an average daily frequency of 125.

Coronavirus: flights down by 49,000 each day – domestic lowest since July 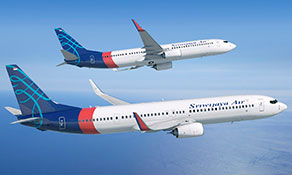 Coronavirus: flights down by 49,000 each day – domestic lowest since July