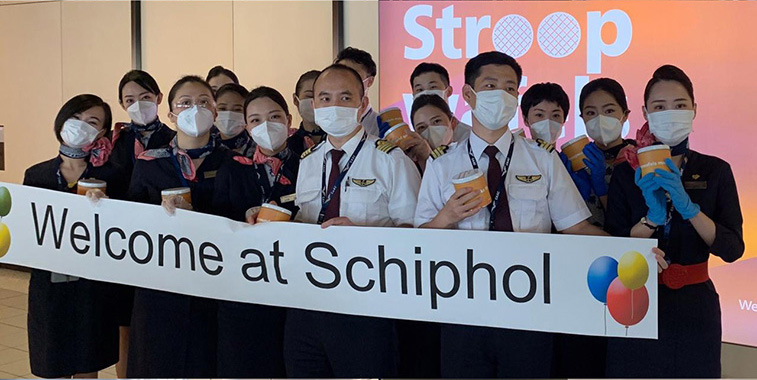 Schiphol, the location for the face-to-face part of Routes Reconnected, is often the continent’s top airport in this coronavirus world, but it is great to see it continuing.

On this August day, Amsterdam’s total flights were just over half that experienced on the same day last year.

The Netherlands’ total traffic, excluding overflights, was down by 46.1% YOY, behind only Lithuania, Albania, Canaries, Norway, and Luxembourg. Amsterdam’s position is from KLM having a larger number of movements (444 on this day) than most other full-service operators.  Only Turkish Airlines (744), Air France (541), and Lufthansa (501) had more, Eurocontrol data shows.

Amsterdam has also welcomed back dozens of airlines, with 45 passenger carriers operating on 21 August across 167 routes.  (At week level, it was 63 airlines.)

It is clearly coming back, especially for LCCs, with their movements down by just 38% YOY.

Combined, these 10 had 85% of the airport’s movements on this day.

Vueling, for example, had 14, so seven departures: one each to Malaga, Alicante, Rome Fiumicino, Palma, and Valencia, and two to Barcelona.

Naturally, not all regions have recovered the same.

European flights represented 87% of Amsterdam’s total on 21 August, up from 82% on the same day last year.

This is from slower redevelopment of North America, Asia, Africa, and the Middle East.

North America stands out, with 31 movements against 97 last year, pushing its proportion of Amsterdam’s movements from 7% to just 4%.

On a percentage basis, though, it is the Middle East that is worst affected, down by 81% YOY.

Intriguingly, Latin America is down by ‘only’ one-quarter, doubling its proportion from 2% to 4%.

Aeromexico, KLM, TUI had service to these areas on this day this year.

Part of the 25% decline YOY is from KLM’s days of operation changing YOY on some routes.  Ignoring this, its summer Latin America network is very strong.

OAG shows that 35 KLM routes from Amsterdam had three+ daily departures on this year’s 21 August.

All 35 routes are within Europe, led by Berlin Tegel, Copenhagen, Hamburg, Heathrow, Munich, and Stockholm Arlanda with four-daily departures each.

Interestingly, three of these 35 – Lisbon, Toulouse, and Warsaw – had an unchanged number of departures YOY, at three-daily.

A further 13 of these 35 routes are down by just one daily departure, including Aberdeen, Florence, Prague, and Vienna.

In contrast, seven routes are down by three daily departures each. Paris CDG, Geneva, Manchester, Oslo, and Zurich, for example, have three fewer departures each, down by 50% YOY.

Heathrow, though, is by far the hardest-hit, with four departures from the usual 11.