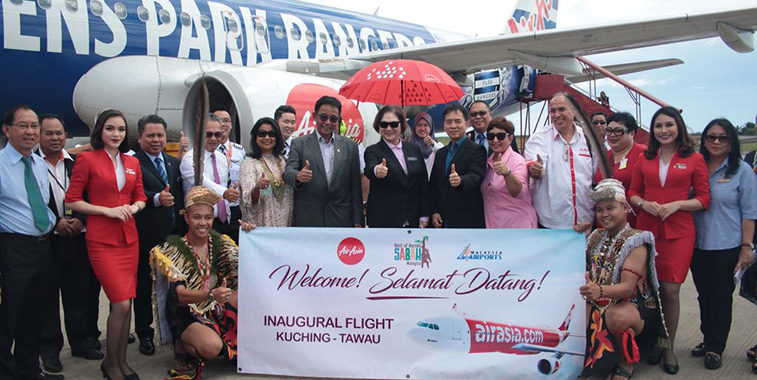 AirAsia Malaysia’s domestic market is rebounding strongly, with a total of 1,604 frequencies in the week starting 10 September, as confirmed by its booking engine.

Of course, this is simply flights available for booking. It says nothing of fares, seat load factors, or sector revenue.

The 1,604 frequencies in the week next month is greatly up from the month-ago period as capacity has been confidently returned.  This, the carrier says, is based on pent-up demand.

In contrast to AirAsia Malaysia’s domestic market, its international capacity – typically just under half of its total – is still nearly non-existent in this September week, down as it is by over 85%.

This will take significantly longer to recover, let alone for good performance. 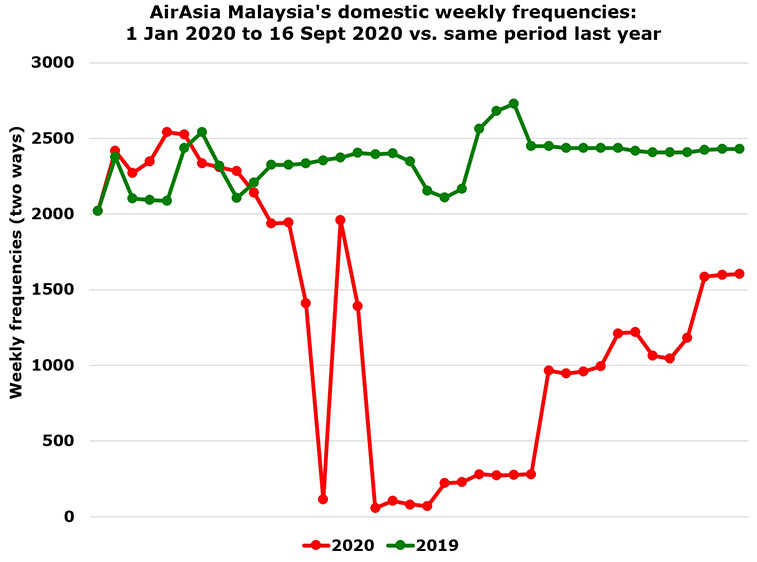 The domestic market represented 54% of AirAsia Malaysia’s capacity last year, more or less unchanged over the past decade despite capacity more than doubling, OAG data indicates.

Domestic Malaysia is of crucial importance to the LCC both at AOC and Group level.

This compares with AirAsia India, which is of peripheral significance to the Group and may be sold.  We previously showed that all of its routes have direct competition with IndiGo.

In the week of 10 September 2020, AirAsia Malaysia has 35 domestic routes involving 16 airports.

This is down from 40 routes and 18 airports YOY, so clearly near ‘normal’ levels, network-wise.

Kuantan and Malacca have no bookable flights for the foreseeable future, if indeed they return at all.  Each airport had one AirAsia route: Kuantan – Kuala Lumpur and Malacca – Penang.

AirAsia Malaysia’s top three domestic airports this year are the same as last: Kuala Lumpur, Kuching, and Kota Kinabalu. But they’ve become more dominant YOY: a share of 57% of total frequencies in the current year, up from 54% last.

Not a big increase, to be sure. And it is mainly from Johor Bahru and Penang, both important airports for the LCC, seeing weekly frequencies reducing by 55% and 58% YOY respectively. 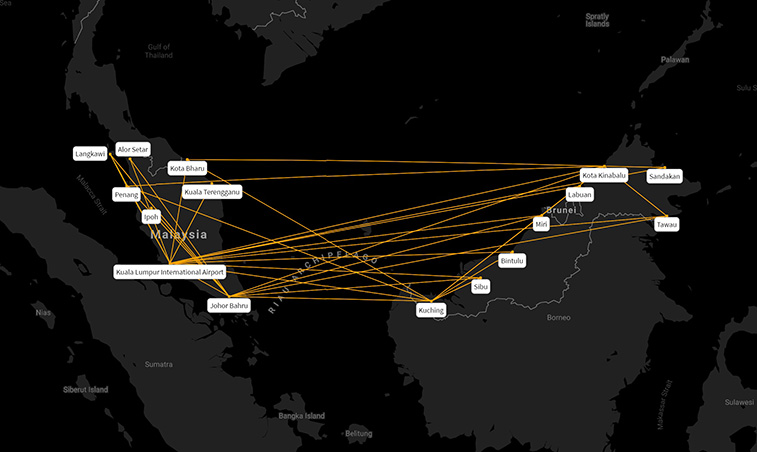 Depending on the day, this is either 10 or 11 daily flights each way – clearly a large amount given the current circumstances.

This route is down by ‘only’ 17% YOY, a strong result given a) the total 34% reduction in domestic frequencies, and b) the 25% average fall for the routes in the figure below with 18+ weekly services.

But Kuala Lumpur – Kuching was not top last year.

It’s clear to see why reductions at Penang and Johor Bahru – as mentioned in the previous section – have resulted in the increased dominance of Kuala Lumpur, Kuching, and Kota Kinabalu.

Interestingly, Kuala Lumpur – Tawau has the same frequency, 35 weekly, in both periods.

While insignificant in itself, one route – Kuala Lumpur to Sandakan – increased marginally by 4% YOY from an additional weekly service. 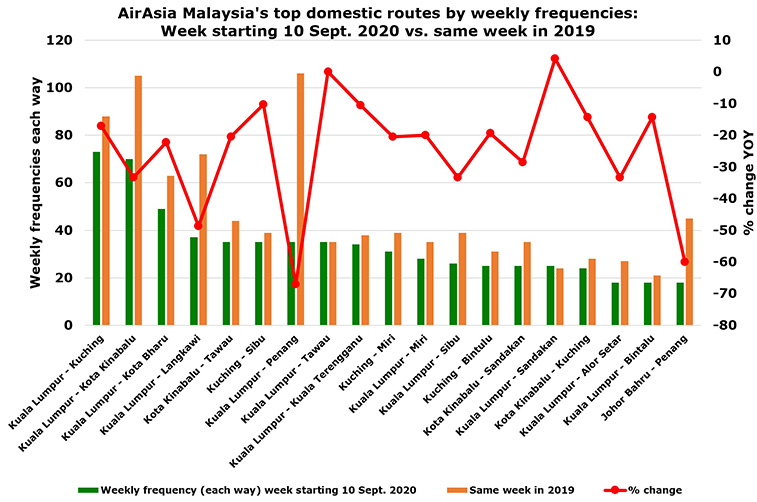