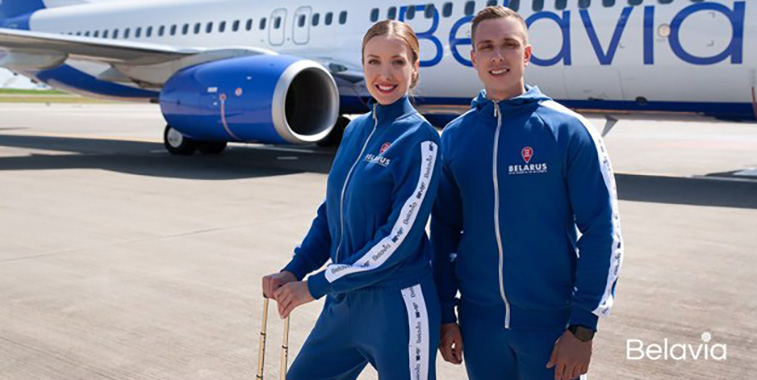 Anyone for skiing? Belavia began Munich in July 2019 on a four-weekly basis. The Bavarian airport is one of four served in the week starting 15 September 2020.

Belavia nearly doubled in size between 2015 and 2019, ending last year with 4.1 million seats.

This pushed its share of Minsk capacity to 73% – its highest ever, OAG data shows.

The primary reasons for this growth: Russia and Ukraine.

Not surprisingly, Belavia is all about Russia and Ukraine, and such seats totalled 2.4 million last year – or 59% of its total.

Its Russia and Ukraine capacity more doubled since 2015 – with 1.4 million added – because of the conflict between the two nations.

Belavia connecting Russia and Ukraine over the Belarus capital has become a key part of the carrier’s strategy, as we see in the figure below and later in this article.

Almost three-quarters of Belavia’s capacity was within Central and Eastern Europe last year, against just 18% for Western Europe.

The carrier had almost as many seats to Ukraine as it did to Western Europe, although the latter had a record number of seats at 777,000.

In all, Belavia’s CEE capacity reached its zenith last year from strong Russia growth, up 11% YOY. This was primarily from Moscow Sheremetyevo and Voronezh starting, and good growth to Rostov-on-Don (+44% YOY) and Kaliningrad (+36%).

In the week starting 15 September 2020, Belavia has 307 scheduled flights from Minsk each way across 43 routes, its booking engine shows.

At airport level, Moscow Domodedovo is Belavia’s number-one with 35 weekly services. At city-level, Moscow-area – Domodedovo, Sheremetyevo, and Zhukovsky – has 63 weekly, so over one-fifth of its total.  (Cleverly, Zhukovsky is outside of Moscow for bilateral reasons.)

Interestingly, Moscow’s 63 weekly is one more than all of Western Europe combined, with Hannover its least-served at twice-a-week.

Other Russian cities, including Voronezh, Kazan, and Nizhny Novgorod, are due to restart in October, but aren’t yet bookable.

Elsewhere, the likes of Ashgabat, Batumi, and Tbilisi will resume by November, while still others, such as Baku, will return to their pre-coronavirus frequency, in this case from the current two-weekly to five. 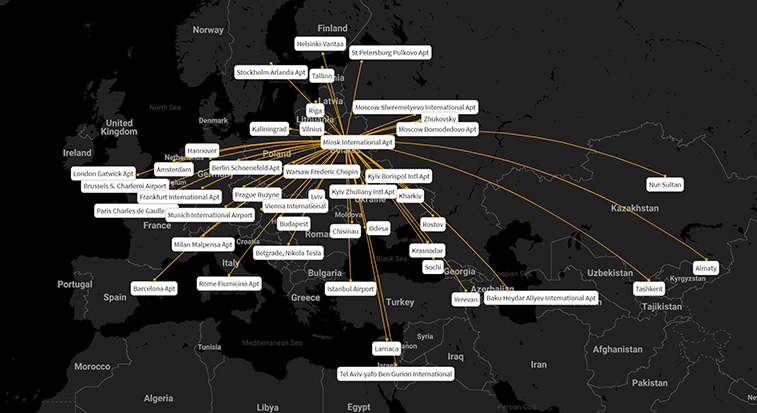 Belavia launched Tashkent (July) and Vienna (April) this year, at one- and four-weekly, with its shift from Berlin Schönefeld to Brandenburg due to happen at the start of W20.

Sheremetyevo was last served until 2012.

Meaningful growth was expected on multiple existing routes in the current year, especially to Amsterdam.

Amsterdam was to be served twice-daily in the peak of S20, doubled from S19.  This did not happen because of coronavirus, but 11-weekly did, its website confirms, although the route reverts to once-daily from September.

In a ‘normal’ full-year, Amsterdam is Belavia’s second-largest destination in Western Europe after Paris CDG.  It has strong codeshares with both KLM and Air France.

Had the airline’s Amsterdam expansion fully happened, Schiphol – currently Europe’s busiest airport amid COVID – would have become Belavia’s number-one route to this region. 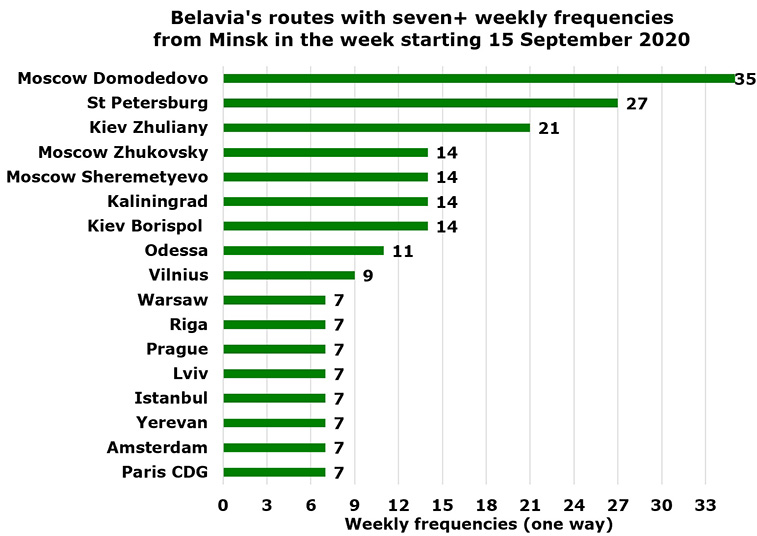 It’s clearly indicated in the following map of Belavia’s top-15 airport-pairs in 2019.

At city-pair level, Kiev – Moscow (including Zhukovsky for clarity) had getting on for 300,000 passengers, OAG Traffic Analyser, using MIDT booking data, shows.

This was over three times as many as number-two, Kiev – St Petersburg.

Kazakhstan to Czech Republic and Germany round off Belavia’s top-10 country O&Ds. 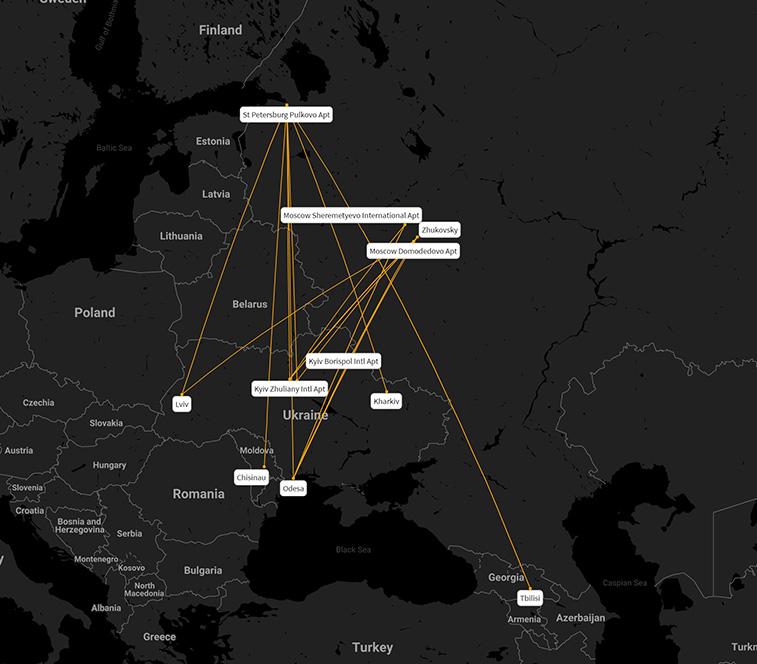 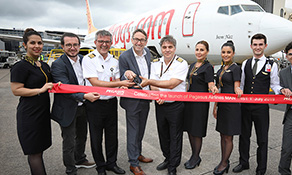