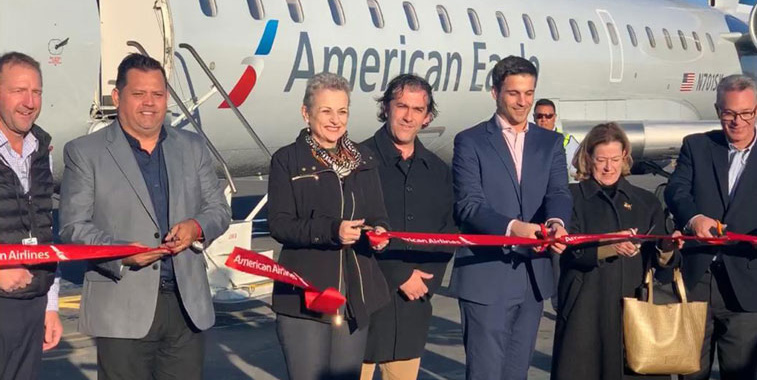 American is to begin, or restart, a raft of routes this coming winter, with most of these from Boston, Miami, and Phoenix.

With six routes coming, Phoenix has the same number of routes starting as Miami, with its Florida hub to see new low-frequency routes to Dayton, Des Moines, Lexington, Milwaukee, Portland ME, and Rochester.

However, American’s Phoenix hub will have the highest number of routes with once-daily frequencies.

Two of American’s six Phoenix routes – Calgary and Cleveland – are resumptions, with both last served in 2016.

Billings is interesting.  Although it has not previously been connected with Phoenix by American, it was last served 14 years ago by America West before it merged with US Airways.

Across all airlines, Phoenix has grown shallowly, with just 2.3 million seats added since 2010. Phoenix was conspicuous by its absence in the top-20 fastest-growing US airports by added capacity.

American’s seats at Phoenix flat versus 2010

American’s top-six added almost 32 million seats in 2019 versus 2010, but Phoenix didn’t grow in this period.

Only Philadelphia’s seats fell, down by nearly two million in this period. However, since 2017 American has once again been growing at the Pennsylvania airport, not something that has happened at Phoenix. 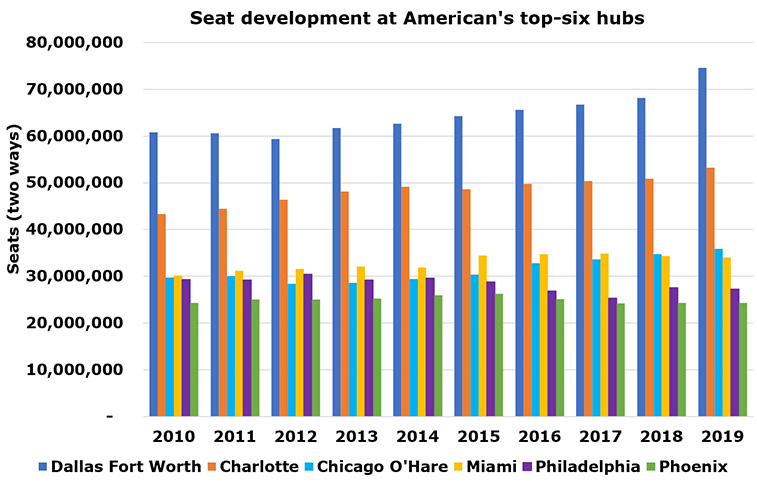 Source: OAG Schedules Analyser. Note: US Airways data has been combined with American’s to give a fuller and fairer picture.

American has 98 Phoenix routes this winter, down just two YOY

Although clearly able to change further, this coming winter American will have 98 routes from Phoenix, down from 100 in W19.

As a result of no growth, American’s domination at Phoenix reduced to 45% last year – its lowest in the past decade.

Of American’s top-six hubs, it is not surprising that only Chicago had lower dominance last year – at 35% –given the breadth of airlines there.

This contrasts vividly with American’s top-performing hubs financially, Dallas and Charlotte, with 85% and 90% of seats respectively.

Unlike American’s other hubs, Phoenix had the second-lowest percentage of regional jets last year, with fewer than one-in-five movements by them.  Only Miami had even fewer, at 11%.

Phoenix’s seats per frequency was necessarily higher than the others, with 132, second only to Miami with 142. But unlike Phoenix, American’s Florida hub has been reducing in recent years by this measure. 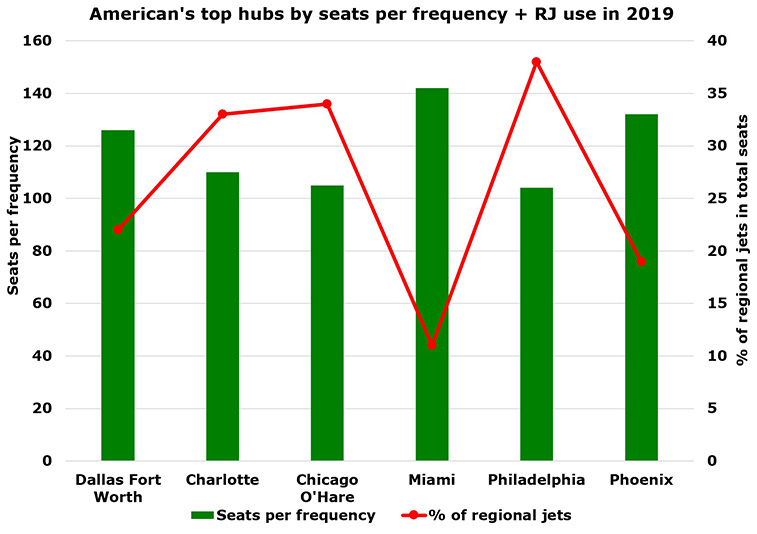