Ryanair’s most profitable airports identified using RDC’s Apex platform; which are in its top-10?

Ryanair’s top-10 most profitable airports generated estimated profitability of over €920 million in the year to March 2020, RDC’s Apex platform shows.

These 10 airports accounted for the vast majority of the ULCC’s total profitability in this year period, together with six in ten of its seats.

These airports are vital to its entire existence.

And, not surprisingly, Ryanair is dominant at all of them, ranking first by seats at each with an average 40% share of capacity.

Ryanair at Dublin vs. Stansted

Dublin was Ryanair’s number-one airport by approximate profitability, with just over €146 million.

The Irish capital was the carrier’s second-largest airport of the 232 in its network in this year period, with strong YOY capacity growth.

It added multiple new routes, such as Bodrum, Dubrovnik, London Southend, and Toulouse, with these joined in the present year by the likes of Düsseldorf, Mykonos, Santorini, and Podgorica.

The Essex airport is by far Ryanair’s largest airport by seats and it added 7.5 million over 2010 – the biggest increase across its top-10 most profitable airports and from the highest base.

Yet Stansted ranked sixth by profitability, with an estimated €81 million. This was dragged down by increased competition from Jet2 at the airport as well as increasing capacity across all London airports.

RDC’s Apex shows that Stansted was Ryanair’s most profitable airport until 2018, but since then profits have decreased as competition has intensified. 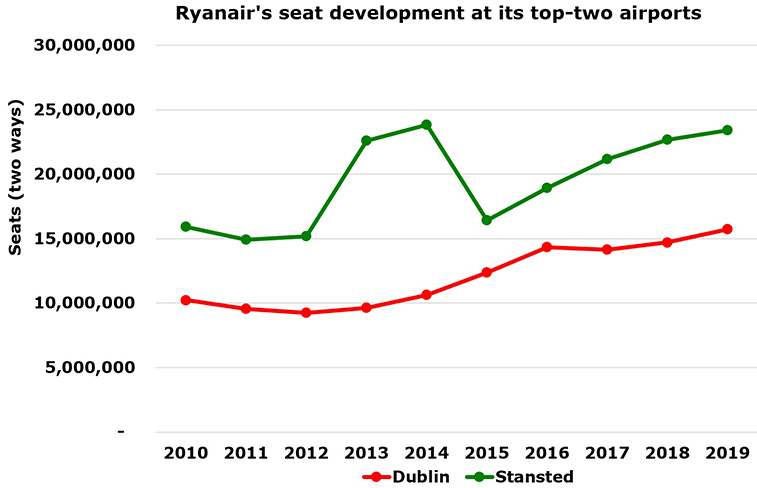 Airports that are higher for profit than size

Dublin, Brussels South Charleroi, Palma, and Malaga – all in the top-10 for both size and estimated profitability – ranked higher for profit than size.

Spain is enormously important to Ryanair and the carrier is the country’s top airline by seat capacity, OAG schedules data shows, primarily from its strong international growth in recent years.

We recently showed that UK – Spain is Europe’s most profitable country-pair for all European LCCs.

The importance of Spain for Ryanair is reflected in Alicante, Malaga, Palma, and Tenerife South all featuring in its top-10 most profitable airports.

Ryanair added nearly 10 million seats at these four airports alone in the past decade.

Curiously, neither Barcelona nor Madrid made it into Ryanair’s top list for profitability, RDC indicates, despite being fourth and fifth respectively by capacity.

Apex estimates that the airline is profitable at both facilities, but overall profits are brought down by above-average airport charges. 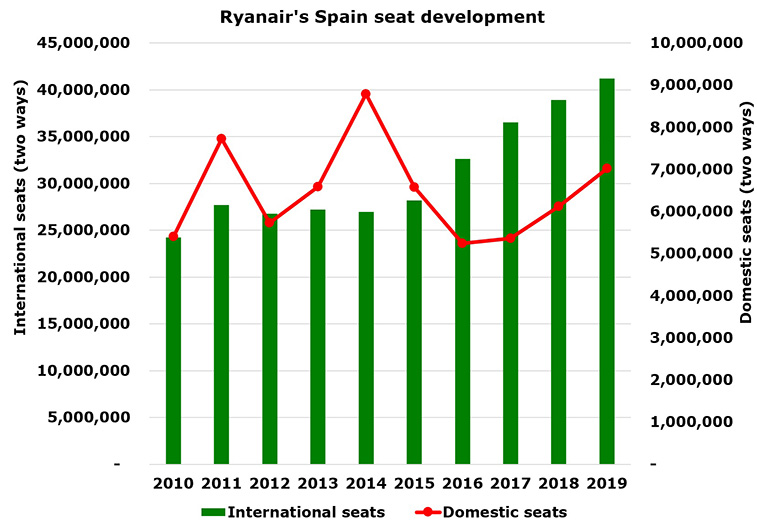 Ryanair airports that punch above their weight

Despite closing as a base, with its routes now using non-based aircraft, the airport performed very strongly: it was #38 for seats yet #9 for profit, with an approximate €60 million.

It converted relatively little capacity into strong financial performance, with its high revenue-per-passenger – obviously the result of above-average sector distance at a median of 3,024 kilometres – far outweighing its cost, so its almost leading profit margin.

This nicely shows that Ryanair’s base closures do not necessarily have anything to do with financial performance.

Alicante also did not make it into Ryanair’s top-10 by capacity, yet it was third for profitability.

Ryanair introduced nine new routes from Alicante in the year to March, including Bordeaux, Exeter, and Marseille, for a net increase of seven. 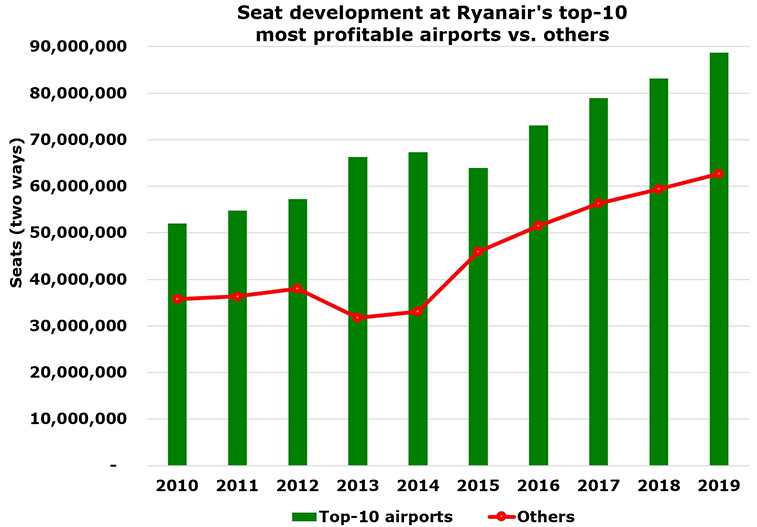 Three secondary airports feature in the top-10 table, at which Ryanair is very dominant.

In the year to March 2020, Ryanair had a 75% share of seats at Charleroi, 80% at Bergamo, and 76% at Stansted.  easyJet closing its Stansted base will necessarily further increase Ryanair’s penetration there.

Another airport, slot-limited Rome Ciampino with a strict movement limit, is next in line in the profitability table, ranking 11th.

Brussels Charleroi performed very strongly by profitability, with the airport Ryanair’s second most profitable with more than €105 million – despite being its sixth-largest by size.

Charleroi’s performance is despite the rise of the ULCC at nearby Brussels Airport.  Ryanair began at Brussels in 2014 and it had 2.7 million seats there last year.

It is mainly for this reason that Charleroi has grown shallowly for Ryanair, with its seats up by a CAGR of ‘just’ 2.3% since 2010 – the lowest increase of all the top-10.

The performance of these secondary airports supports the recent assertion by Ryanair’s Director of Route Development that two airports nearby can both grow and support each other. 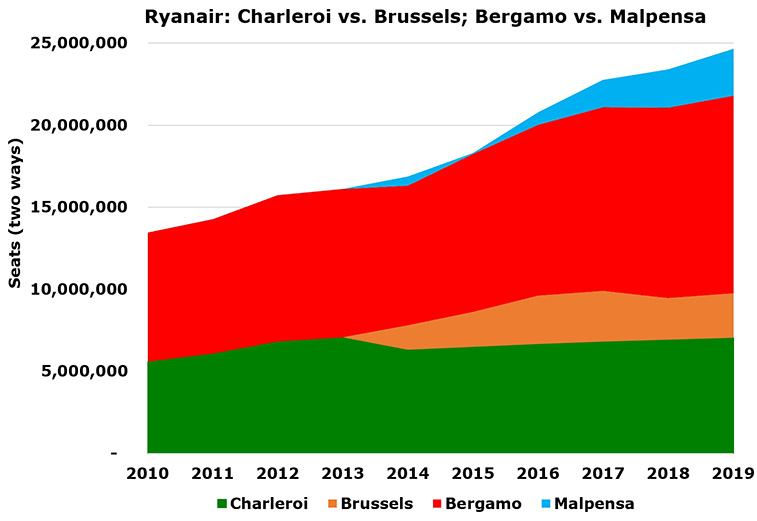 The airport has quickly become a key part of the ULCC’s network both by financial performance and capacity growth.  Ryanair is now the airport’s number-one airline. 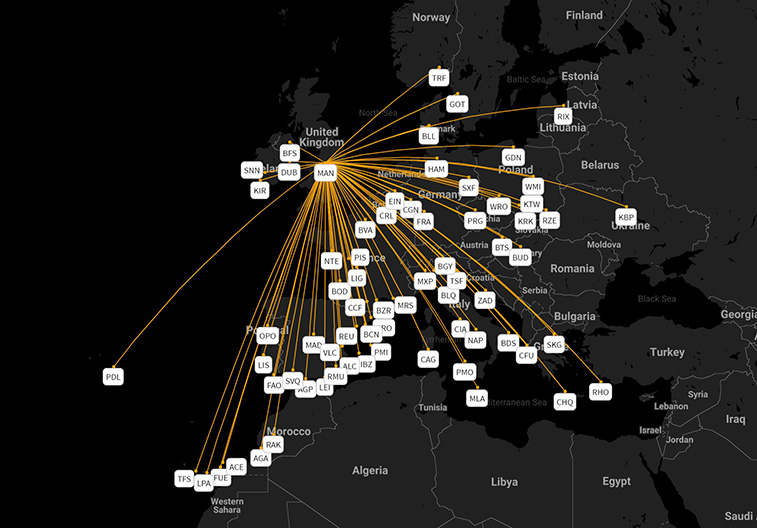