The US’ top-100 airports by capacity had almost 1.29 billion seats last year.

This follows other recent analysis by us that showed that Los Angeles, Seattle, and Atlanta grew the most between 2010 and 2019, while Sanford, St Pete – Clearwater, and Charleston grew the most on a percentage basis.

Two of these 15 airports were responsible for over half of the 22 million decline: Memphis (down by almost 7.2 million) and Milwaukee (-4.2 million).

Memphis’ big fall, pushing it from 35th to 60th position, is obviously from the end of Delta’s hub there.  Milwaukee, from 36th to 53th, is mainly from the end of Midwest at the start of the decade and then AirTran, together with Frontier’s more recent cuts.

Seven of the 15 airports had declines of a million or more seats, with an average ranking fall of over 11 places. Double-digit percentage declines were experienced by seven airports, led by Memphis with 54%.

Manchester fell to #100; these 15 airports highlight openings for Breeze

Manchester, NH, had the biggest fall in ranking, ending last year in 100th – down from 74th.

This was not helped by other airports, such as Fresno, Greenville Spartanburg, and Fayetteville, AR, all being in the top-100 league last year and not at the start of the decade.

Historically, the core purpose of Manchester was as an alternative to congested Boston, located roughly one hour away. The same is true of Providence, although its metro is much larger.

As such, it is no surprise that the fall of Manchester (and Providence) is mainly from the pullback by Southwest, whose seats have fallen almost yearly at Manchester.

Back in 2010, Southwest had 2.2 million seats at Manchester and fewer than 1.2 million last year. It also fell by nearly one million at Providence. Its Manchester network halved from eight routes to four in this period.

This all suggests possible opportunities for start-up Breeze, and some of these 15 airports may well feature in its network.

We recently explored potential routes for the airline from three of the 15 airports, and Manchester and/or Providence may also eventually feature on its route map. 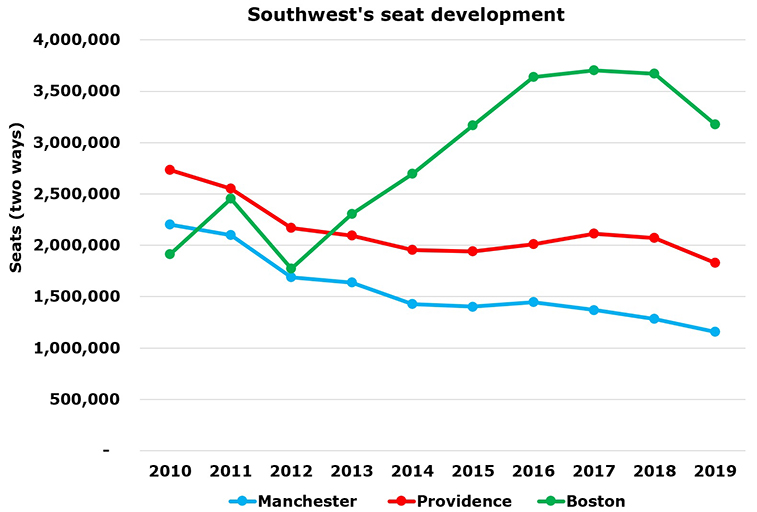 Significantly, two-way seats across these 15 airports increased by nearly 9.5 million since 2015 – up by 8%.

13 airports recorded growth in this period, although they have obviously not yet passed what was achieved in 2010.

Meanwhile, American, Delta, and United all grew strongly at the Texas airport, with increases of 45%, 40%, and 49%. These incumbents added nearly half-a-million seats between them.

Southwest, by far El Paso’s leading airline, added almost 250,000.  However, its 2.1 million seats at El Paso last year was nearly one million short of that recorded in 2010. 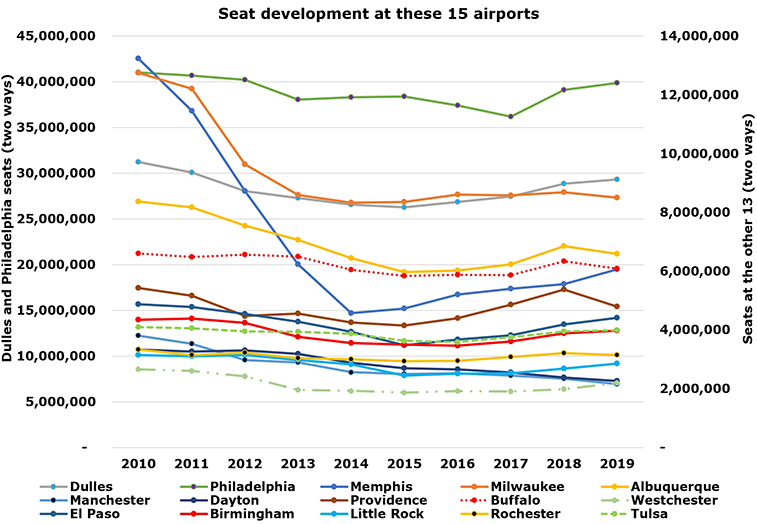 Source: OAG Schedules Analyser. Note: this is based on all seats from each airport.

All about Dulles, Philadelphia, and Memphis…

Since 2015, though, development has really all been about Washington Dulles, Philadelphia, and Memphis, with these airports responsible for over six in ten of the 9.5 million additional seats.

In the current year, Memphis has added, or will add, Delta to Indianapolis and Salt Lake City, together with Southwest to Atlanta and Phoenix. Although it has been pushed back, Delta will start Boston from January, meaning Memphis’ number-one unserved route will again be operated.

Dulles is by far United’s smallest hub, with fewer than 19 million seats last year, up from 16 million in 2015. The carrier’s network there increased from 111 to 130 routes in this period.

Although coronavirus may alter its plans, Dulles’ roles for United is changing, with a bigger emphasis on connecting traffic as Newark focuses more on local.

Scott Kirby said, “As we’ve grown Dulles and connectivity, [the hub has] got much better.”  And United is planning – or at least was planning – on having six waves a day, up from the current four. 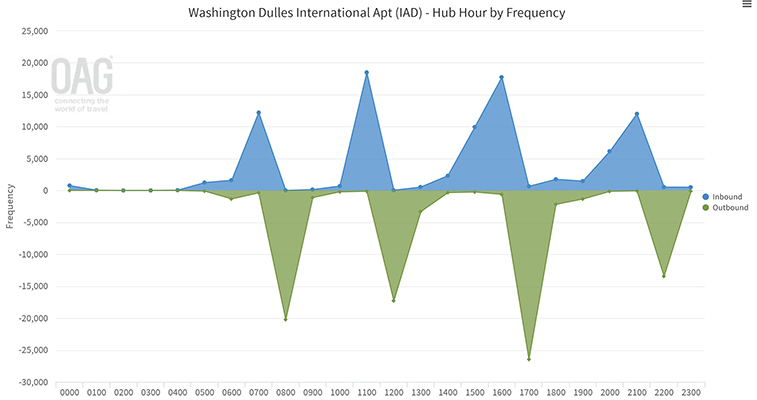 … as Dayton and Manchester’s seats have reduced

Despite having 18 routes, Dayton is clearly hindered by its location, positioned as it is within a roughly one-hour drive of Cincinnati and Columbus and less than two from Indianapolis.

American Airlines is Dayton’s top operator, with a 47% share of capacity across routes to – in order of capacity – Charlotte, Dallas Fort Worth, Chicago O’Hare, Philadelphia, Washington National, and New York La Guardia.

The US3 will start a new once-weekly service to Miami in W20.

Despite Allegiant to Orlando Sanford, the Ohio airport’s leading unserved market is Orlando with a non-stimulated 60,000 last year, followed by:

The potential appeal of these 15 airports to Breeze is obvious.