Kuala Lumpur has become an increasingly important part of Malaysia Airlines’ network, with the capital having 86% of the FSC’s seats last year – its highest in many years.

Malaysia Airlines’ retreat to core as capacity has fallen is fully understandable given the various events that have afflicted the carrier in recent years.

Indeed, as a result of these (on-going) difficulties, the years since 2016 have seen a big reduction in capacity.

And there has not yet been much of a recovery, even before coronavirus is considered.

The figure, below, indicates that Malaysia Airlines’ Kuala Lumpur seat capacity was still down by nearly four million last year versus the high of 22 million in 2014.

Not all areas are the same.  The domestic market was down by 20% last year against 2016 and is still far from peak levels.

Wider Southeast Asia from the Malaysia capital, meanwhile, was down by 5%. However, last year’s seats to this area were the third-highest since the decade began. 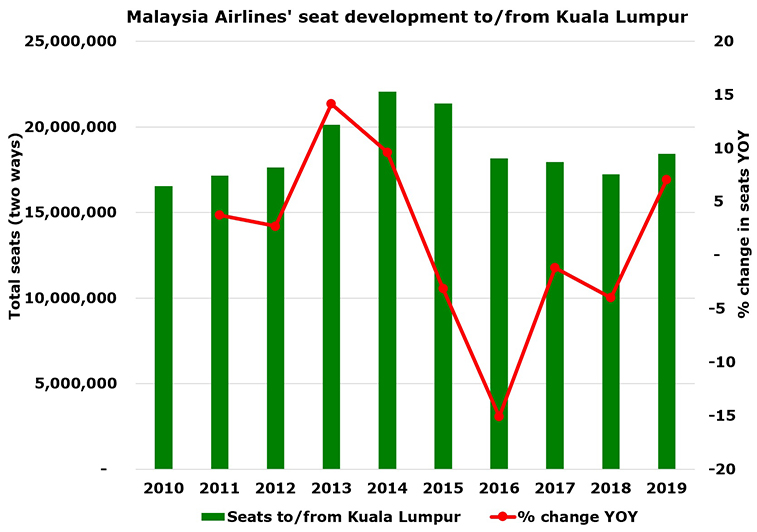 Last year was Malaysia Airlines’ best ever to Northeast Asia

Last year was the best ever for Malaysia Airlines’ Northeast Asia capacity, with almost 2.8 million seats.

Northeast Asia has seen almost dead on a million seats added between 2016 and 2019, with China mainly responsible for this. However, China was mainly a clawback, with seats there still down over the peak.

In contrast, Malaysia Airlines’ capacity to Japan – and also to South Korea – from Kuala Lumpur has surpassed the historic levels with strong real growth in the past couple of years.

Tokyo experienced no decline since 2016 amid the airline’s fight for survival.  Indeed, Malaysia Airlines added over 121,000 since that year.

OAG Traffic Analyser, which uses MIDT booking data, indicates that it had estimated traffic of 343,162, meaning a seat load factor of 82%.

While this SLF is relatively low in itself, it is higher than the airline’s system average based on the latest available. Of course, this is just one aspect of performance.

Obviously, Tokyo – Kuala Lumpur is a good-sized market, with Malaysia Airlines’ local passengers accounting for about 45% of its total traffic.

Narita – Penang was Malaysia Airlines’ number-one O&D over KUL, MIDT via OAG shows, with 7% of the airline’s connecting traffic.

Passengers connecting to destinations across Malaysia accounted for over 65,000 passengers.  Despite this, only two other cities in the country were in the top-10: Kota Kinabalu and the holiday island of Langkawi.

These – and the likes of Denpasar Bali, Kathmandu, Phnom Penh, Phuket – show how important the leisure and VFR markets are.

Interestingly, Narita – Kuala Lumpur – Kota Kinabalu has circuity of 70%, i.e. it is 70% longer than a non-stop is.  This is significant.  And despite being second-ranked by connecting traffic, Kota Kinabalu is also served non-stop from Narita by the Malaysian operator on a twice-weekly basis.

Indonesia had over 28,000 to/from Narita (Denpasar Bali was top) and Australia over 22,000, its second- and third-largest country markets from the Japanese capital.

Malaysia Airlines has a tiny percentage of the overall Narita – Australia market, but Perth was its fifth-largest O&D. The WA airport is, after all, the only one that makes sense from a circuity perspective. 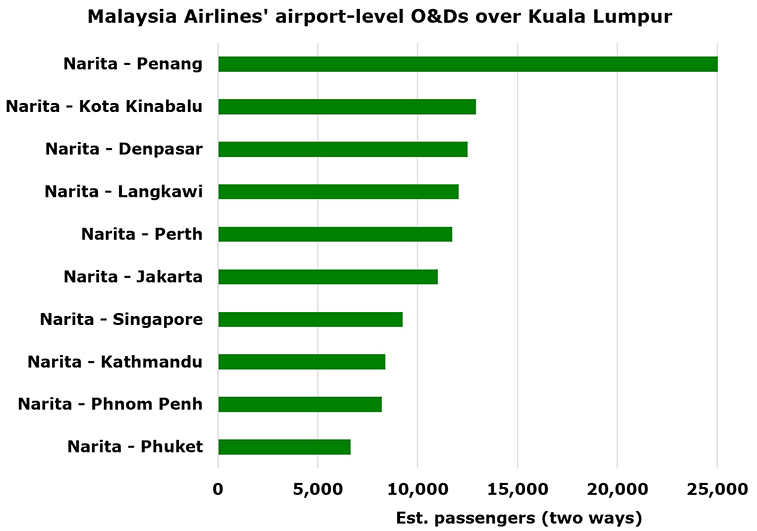