The purpose: to operate a repatriation flight back to Vietnam.

It had nearly 300 Vietnamese citizens onboard and was operated by one of the carrier’s B787-9s, its only widebody type.

Melbourne’s Chief of Aviation, Shane O’Hare, said: “We are excited to welcome a new full-service, five-star airline to Melbourne.”

O’Hare added: “We look forward to strengthening our relationship with Bamboo Airways and to enhancing our non-stop service to Vietnam in 2021 – including to Hanoi for the first time, which opens up critical trade, leisure, and business opportunities for Victoria.”

He refers to Bamboo Airways’ plan for a new scheduled service from Melbourne to Hanoi, which is the largest unserved market from the Vietnamese capital. 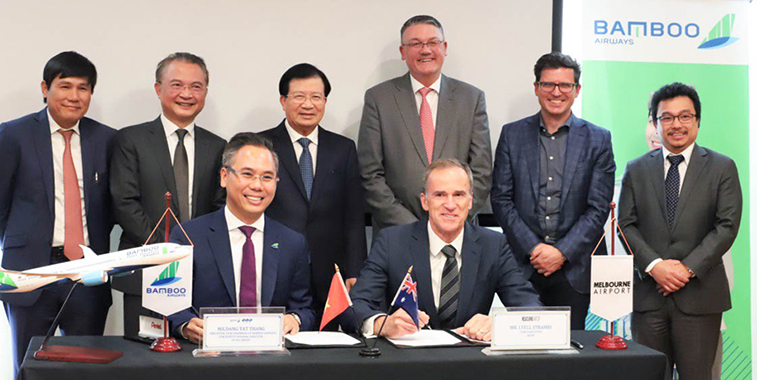 Melbourne had 44% of the market last year on the back of its sole route to Vietnam.

Melbourne has not had Hanoi service before.

This demand mainly comes from a combination of both Vietnamese VFR traffic and tourism from Australians.

OAG Traffic Analyser, using MIDT booking data, shows that Melbourne – Hanoi had estimated traffic of 73,000 last year with an average one-way base fare of USD$374 (excluding taxes together with any fuel surcharge and ancillaries).

Melbourne is not just attracting another FSC.  Its freight operation has soared.

Melbourne, the busiest domestic freight hub and second-busiest international cargo hub in the country, has focused on increasing its cargo operations to replace the belly-hold capacity lost from reduced passenger movements.

“Melbourne is one of the only major Australian airports to operate 24/7 and curfew-free.  That’s full flexibility is a huge advantage we’re able to offer our airline customers,” said O’Hare.

“Currently, our dedicated cargo services reach 16 international markets non-stop, with the majority these to Asia and the Middle East. However, our analysis shows there is huge demand to import and export goods into other markets, including the USA.”