As a network manager for a big European LCC told anna.aero recently, “Of course routes are still being evaluated for the shorter- and longer-term. Strategic thinking has to be happening.”

With this in mind, Copenhagen – Bilbao is one of Europe’s top unserved O&Ds, with 21,785 passengers last year – up by a hefty 18% YOY.  This is based on MIDT booking data via OAG Traffic Analyser.

And it has an estimated average year-round base fare of €98 each way (excluding taxes, ancillaries, and any fuel surcharge).

Bilbao is the top unserved market from Copenhagen to Spain, with the Danish capital the third-largest unserved from Bilbao.

In addition, Kiwi.com search data shows that just over 485,000 searched for Copenhagen – Bilbao last year.  Interestingly, it is one of the few core unserved markets from the Danish capital that is almost evenly split by origin of search.

Not surprisingly, it is a reasonably summer-seasonal market, with 35% higher demand in Q3 than Q1.

What Copenhagen says about the opportunity

“We see great potential for non-stop service between Copenhagen and Bilbao.

“There are several Danish companies with activities in the area in and around Bilbao and the city itself offers great opportunities for city break holidays, thus catering for both business and leisure traffic.

“In our own airport passenger survey, 43% of the passengers indicate that they travel for business purposes, 38% travel for leisure, and 15% travel for VFR.

“Moreover, Copenhagen is an interesting city for Spanish travellers to visit at all times of the year.”

Copenhagen to Bilbao: who could operate it?

It is unlikely that this route would appeal to easyJet or Ryanair given neither airline has a base at either airport and Ryanair has only one route to Bilbao.

While SAS doesn’t serve Bilbao, it does have six routes to Spain with an obvious leisure focus: Alicante, Barcelona, Gran Canaria, Palma, and Tenerife South.  Bilbao might not be much of a stretch.

Vueling, meanwhile, is by far Bilbao’s top airline with 39% of its seats.  It also has three routes to Copenhagen: from Barcelona, Florence, and Paris CDG.

But it is perhaps Norwegian that is most likely to begin Copenhagen – Bilbao. 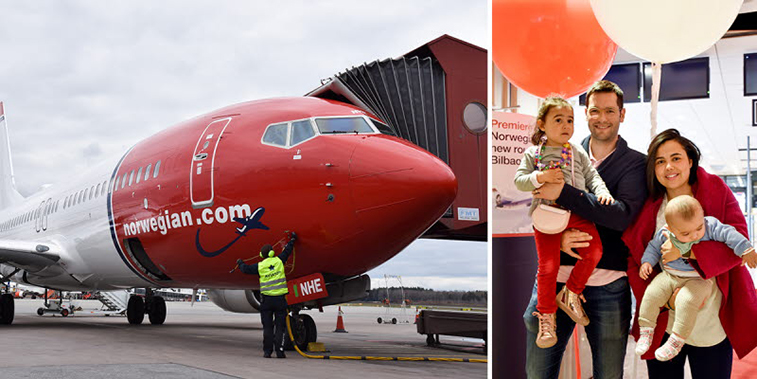 Norwegian began Stockholm Arlanda to Bilbao in May 2018. Like its Oslo – Bilbao service, it operates twice-weekly.

Norwegian could be most likely

Norwegian already serves Bilbao from both Oslo and Stockholm Arlanda.

Oslo began back in 2013 and operates from June to August.  Stockholm started in 2018 and operates a longer season, from May to October.

Prior to starting, both markets were smaller than from Copenhagen.

Stockholm traffic, for example, totalled 14,000 in 2017, with a similar average fare as Copenhagen – but the Sweden capital had a 30% longer stage length.

Norwegian is also the second-largest player at Copenhagen with 19% of its Europe capacity.

The carrier is by far the largest operator between Copenhagen and Spain, with 1.2 million seats last year – almost half of the market.  It had more than three times the capacity of second-placed Ryanair.

With a twice-weekly, 189-seat B737-800 at Norwegian’s average 86% SLF, the carrier would need an estimated €82.06 each way in total average revenue per passenger to breakeven. 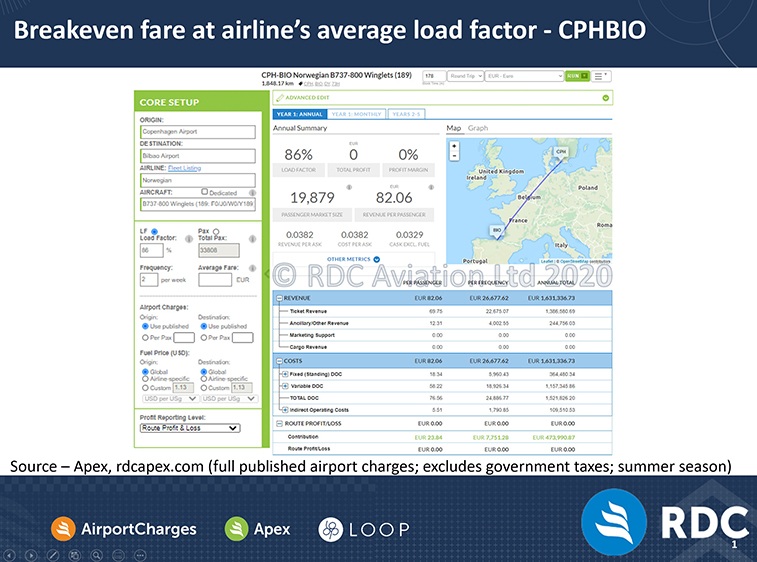 At this frequency, capacity, required fare, and SLF, Norwegian would need 19,879 passengers to breakeven.

Assuming Norwegian had the market average base fare of €98 one-way and ancillaries of €12.31 for total revenue per passenger of €110.31, RDC’s Apex shows a summer-seasonal profitability estimate of almost €559,000.

This is, again, based on full airport charges without any discounts or incentives.

Will we see Norwegian on Copenhagen – Bilbao?

“Why not?” is the answer, with indirect passengers already paying over what the airline needs to break into profit. 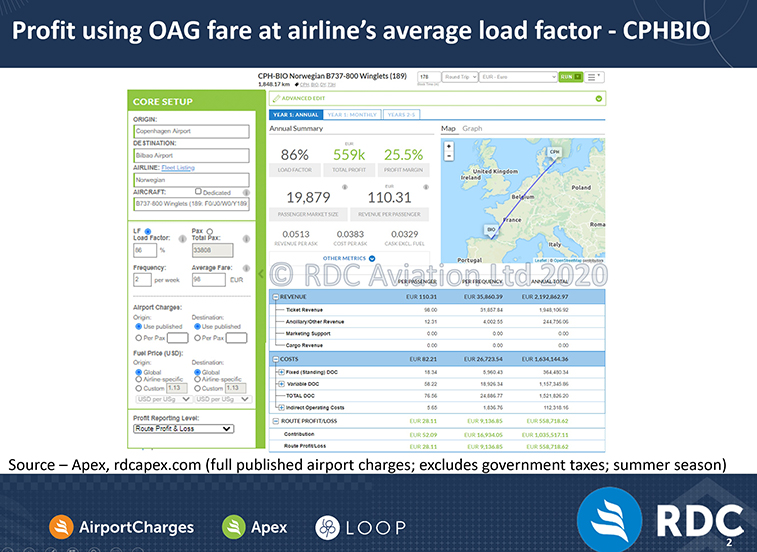