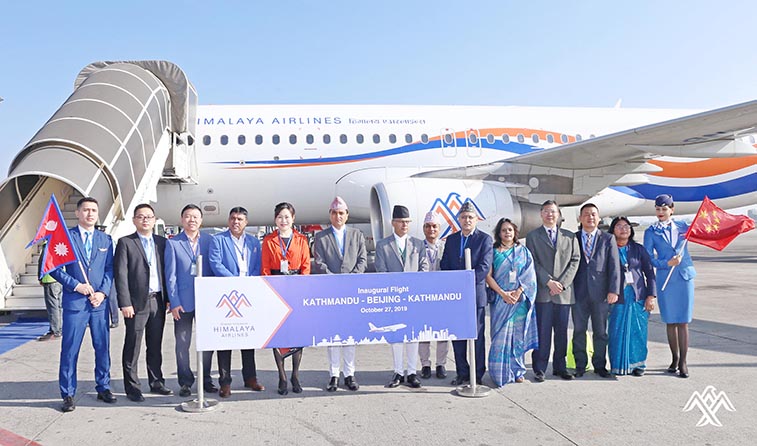 While there was some clawing back capacity, the vast majority was ‘proper’ growth. It follows years of effectively no development.

Kathmandu’s international market grew by 23% in this period with over 1.1 million seats added, with international capacity within touching distance of six million.

However, it is Kathmandu’s domestic network that has primarily driven its growth, responsible as it is for 65% of the added seat capacity.

Domestic seats have grown by 159% since 2016 to almost 3.3 million, with two million seats added.

This pushed Kathmandu’s domestic penetration to 36%, its highest ever, and up from a low of 21% in 2016.  It was not helped by the earthquake or political instability. 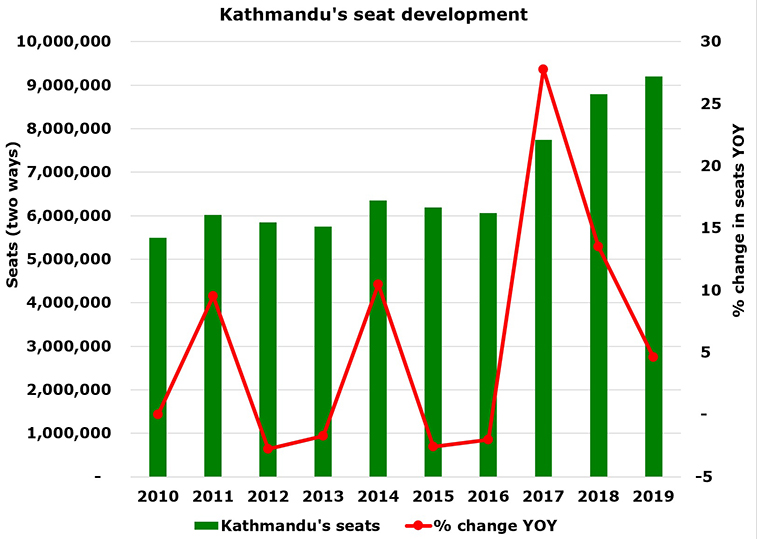 Buddha Air added four in ten Kathmandu seats, by far the most of any operator.  This strongly cemented its position as the airport’s top airline, with its 14% share four years ago rising to 35%.

Buddha Air remains overwhelmingly a domestic operator, with its growth from much greater use of ATR-42s and -72s, which now number three and eight respectively.

It is also from it continually growing capacity strongly to Bharatpur, Bhairawa, Pokhara, and Surkhet especially.

The regional carrier had – and perhaps still has – big international ambition, with a focus on higher-end tourism, including non-stop services to Moscow, Seoul Incheon, and Japan. However, its 639-kilometre ATR-operated service to Kolkata was cut in 2019 after just nine months. 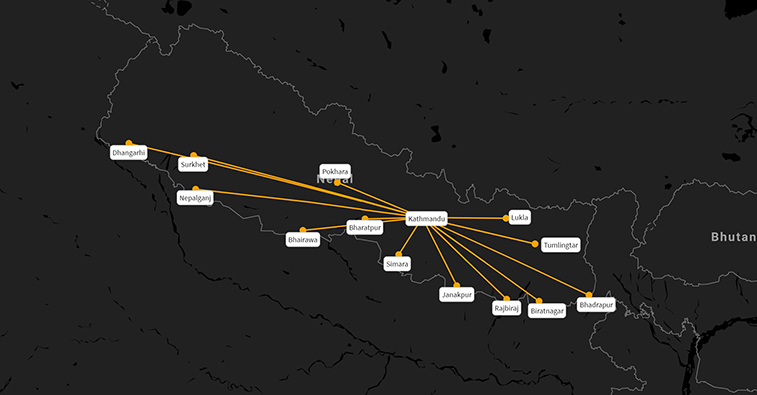 1.6 million seats added at Kathmandu by three other Nepali airlines

Perhaps surprisingly given Nepal Airlines’ many challenges even in normal times, its additional seats – which doubled its capacity to over one million – was not from replacing capacity.

It was from the arrival of its A330-200s in mid-2018, although these aircraft have been very sub-optimally used.  This pushed Nepal Airlines’ Kathmandu penetration last year to 11%, its peak.

Kathmandu’s growth was also driven by the arrival of Himalaya Airlines in 2016, whose network is entirely international and now focuses on China, Southeast Asia, and the Gulf. 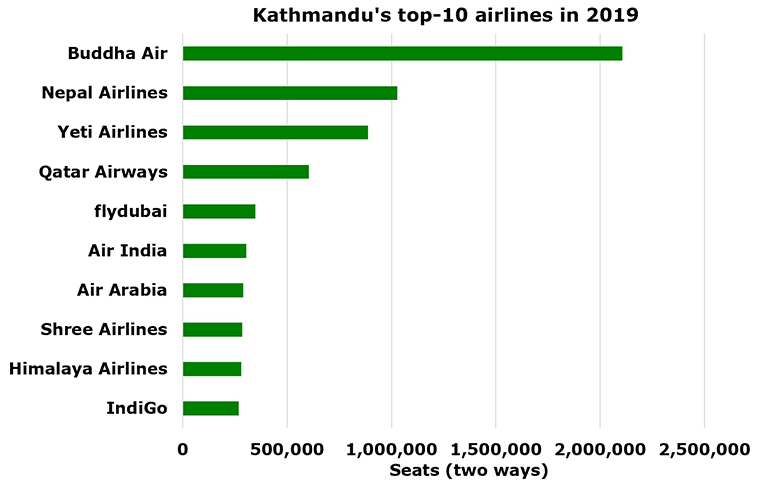 Kathmandu’s international capacity amounted to 64% last year, down from 79% in 2016 because of its domestic expansion.

The airport has introduced multiple new routes in the current year, including Vistara from Delhi, Himalaya Airlines to Chongqing and Kunming, and Nepal Airlines to both Guangzhou and Tokyo Narita.

With over 120,000 passengers, according to MIDT booking data via OAG Traffic Analyser, Kathmandu – Tokyo, at city-pair level, was a significant unserved market.  Meanwhile, Kathmandu’s China capacity nearly has trebled since 2016, with almost 700,000 seats last year. 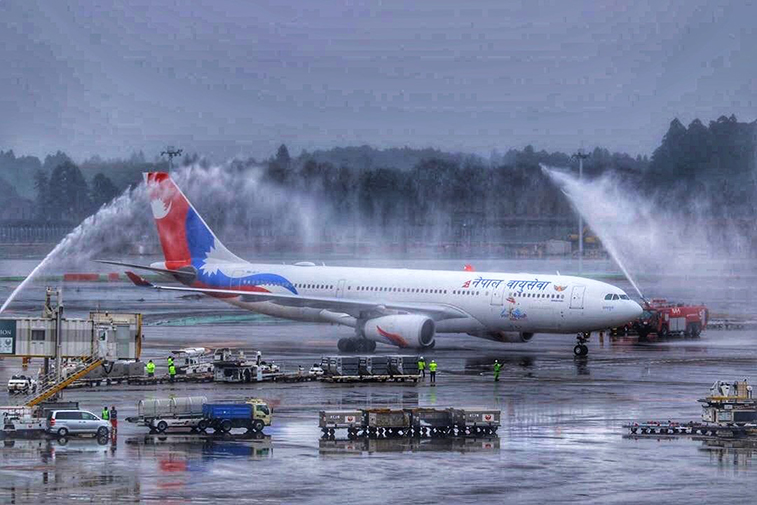 Doha is notably far ahead of Dubai, with Qatar having more Nepalis than the UAE.  There’s no Emirates to Dubai; instead, it uses flydubai, ordinarily with a three-daily service.

However, the UAE – with Abu Dhabi, Dubai, and Sharjah routes – collectively has more seats than Qatar.  Dubai Al Maktoum was also served until June 2019.

Qatar, Nepal Airlines, and Himalaya Airlines all serve Doha, usually (pre-coronavirus) with around 38 weekly frequencies. Qatar Airways typically has a four-daily service, as it does next week using A330-300s and B787-8s. 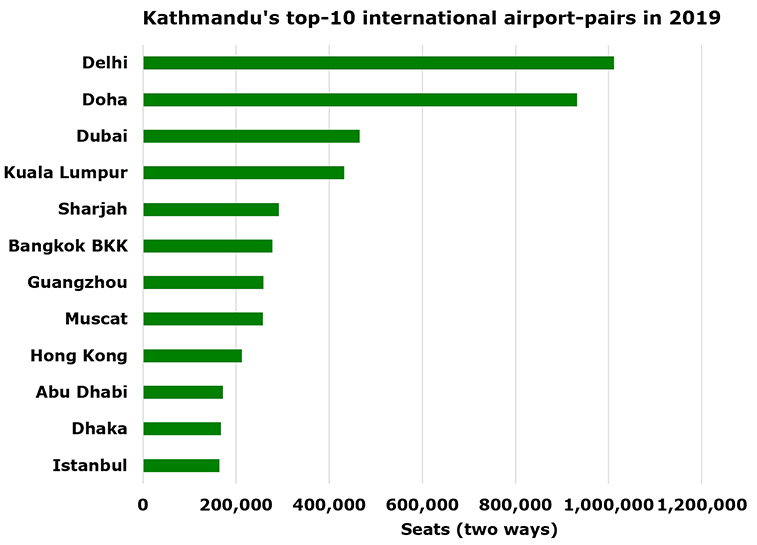