Lufthansa adds 13 routes from Frankfurt for S21; 11 are brand-new 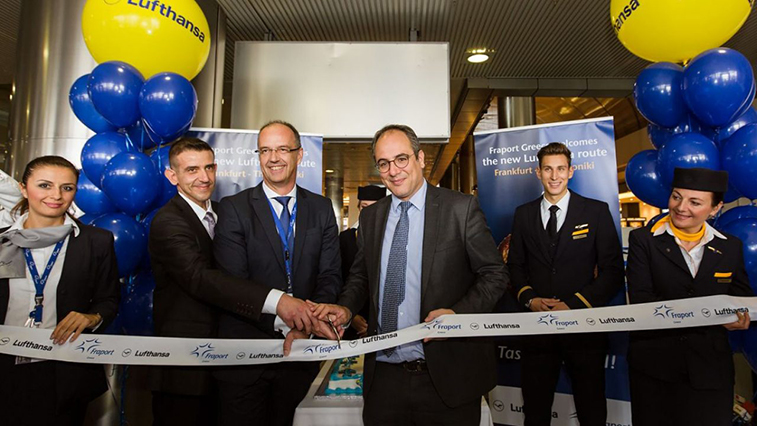 At a time when leisure demand is stronger than business and is likely to remain so for a good while, it is no surprise that an increasing number of FSCs are focusing more on such new routes.

Now it is the turn of Lufthansa, with 13 new summer-seasonal offerings from Frankfurt for S21.

This development comes as Lufthansa’s new long-haul LCC takes shape.  It is expected to use its parent’s A330-300s and A340-300s as fuel is at a historically low level, while the cost of labour will be lower and more productive because coronavirus will make T&Cs more negotiable.

Lufthansa will also reintroduce three other leisure routes – Bodrum, Shannon, and Tivat – next year. These summer-seasonal offerings have not been operated this year because of the pandemic.

These 13 routes had estimated passenger traffic from Frankfurt of 716,000 last year, MIDT booking data via OAG Traffic Analyser suggests.  This is both non-stop and indirect combined.

Hurghada is by far the single biggest market.

Lufthansa will have higher week frequencies than its direct competition (whether initially or not) to Chania, Mykonos, Preveza, and Varna.

The EU3 will compete directly with Condor on nine of these routes, while it will be the sole operator to Paphos and possibly Rijeka, subject to whether Ryanair returns or not.

Frankfurt – Paphos is interesting: it has previously been served by others, albeit often not for long.

It was last operated by Condor between March and November 2017 on a once-weekly basis. Before that, Cyprus Airways and Condor both served it in 2010.  Ryanair served it for one year (2012) from Hahn. 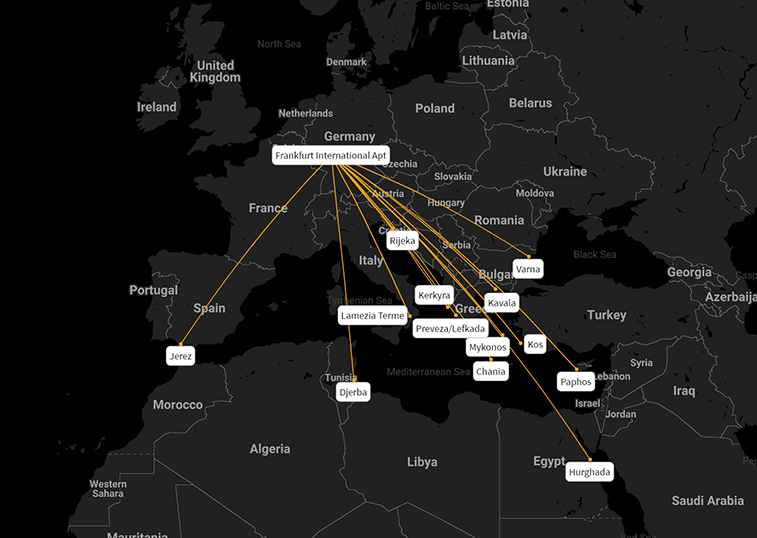 Six of Lufthansa’s added routes are to Greece, with the carrier now to serve 11 destinations in the country from Frankfurt next summer.

These six will join Athens, Heraklion, Rhodes, Santorini, and Thessaloniki.

Until 2018, Lufthansa served only Athens from Frankfurt.  That year, Santorini and Thessaloniki joined, followed last year by Heraklion and this current year by Rhodes.

Despite Lufthansa’s Greece growth from Frankfurt, increasing its seats by nearly 158,000 this three-year period, its market share declined to 32% last year, its second-lowest ever. Low-frequency and typically summer-seasonal offerings didn’t help.

Lufthansa and Aegean – both Star Alliance members – had 53% of the market last year, down from seven in ten seats a few years previously from new, non-affiliated entrants and Aegean’s shallow growth. 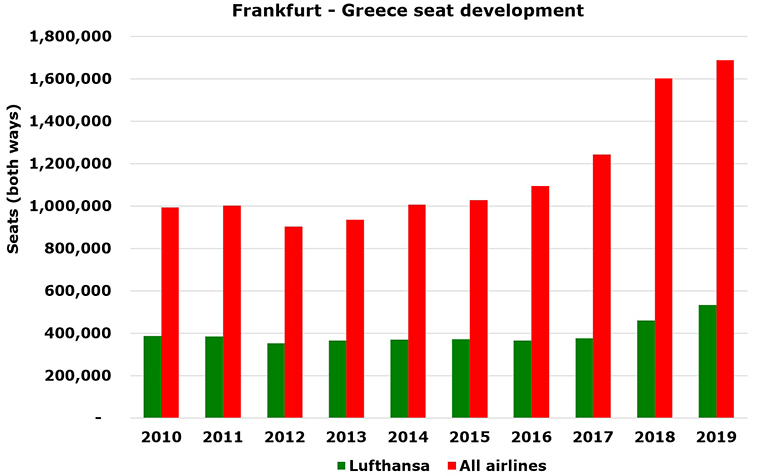